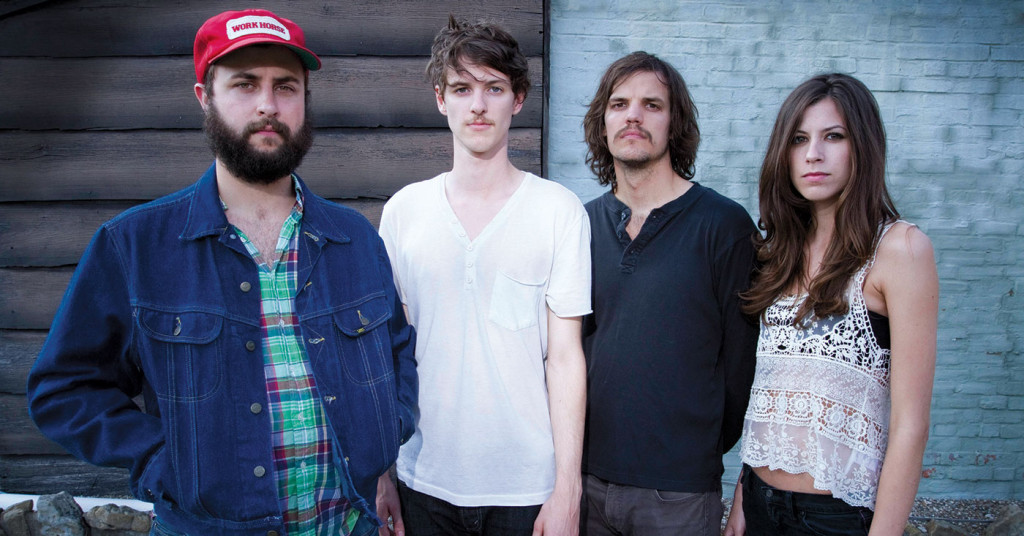 Relaxing on a day off in Austin, Texas before their performances as part of the SXSW Festival, Matt Myers, guitarist and vocalist for Houndmouth, was relaxed and frank in everything asked of him, and more than willing to share. You get the sense in talking with him that he and the rest of the band are grateful for their opportunities, and diligent in pursuing them. Far from all the press and hoopla, the appearances on Late Night TV or performing at huge festivals, Houndmouth, at least by way of Myers, seems humble and pragmatic in their singular quest to be the best band they can be.
“We wouldn’t have been a band if it hadn’t been for our friends sitting on the couch in our rehearsal space,” Myers says. “We had no idea what we were doing. We just put the music up online. And the guy who is our manager now said we should stop doing this.”
So they did and, with that encouragement, became serious — they went all in, making the band the only plan, sink or swim. In the summer of 2012, the group traveled to the SXSW Festival for the first time, despite advice from their friends and advocates. And their gamble paid off.
“Geoff Travis from Rough Trade showed up at our first show, and the next night we played at this San Jose hotel, it was like our fifth show ever. Geoff tried to make it to that one, but missed us. He talked to us after the show and we’ve been in touch ever since.”
Picked up by Rough Trade that year, Houndmouth has stayed busy since. This year saw the release of “From the Hills Below the City,” their debut full length, as well as a string of television appearances and a full tour schedule.
But, when he’s off the road, Southern Indiana offers some much-needed isolation.
“I just got a house in Southern Indiana,” Myers says. “I like being there, kind of outside the scene. I go to a coffee shop and I don’t see skinny jeans for miles. I really enjoy being in New Albany.”
That said, Myers has a high opinion of the local scene.
“At the end of the day, you need to be plugged in somehow, and Louisville has a wonderful music scene,” he says. “I always compared it to Nashville, you know. In Nashville, you have all these session players. In Louisville, you hire a session player and you never know what you’ll get, but you know it’ll be interesting. I’ve never done session work in Louisville and asked for money; we just get together and have fun.”
Somewhere between their relentless touring schedules, the band found the time to record their sophomore album, “Little Neon Limelight.”
“Before the last record we had never been in a studio before,” Myers says. “We just went in and did the songs, we just went in and played them and that’s how it was. [This time] we called up producer Dave Cobb. He said yes, but that he didn’t want to do another Americana record. He said let’s put our hats on and get weird and we said ‘Perfect.’ We know well enough when there is a weak point in a song, but we needed someone to help direct us. We kind of have a nice balance between using some good stuff that’s available now, and making records the way we love. It’s so funny to me that they’re playing our songs on the radio and I just hear these mistake and imperfections, and I love that.”
And, to some extent, having fun is the most important part of any performer’s career, in making this more than just a job.
“When you’re touring, you have to play some weird markets sometimes,” Myers says. “We played Lawrence, Kansas. Then we played Chicago. On one night, there might be 100 people there and on the next 600. On the nights with less people there, you can get into more of a playful mindset. On the nights with fewer people, we’ll come out and goof off. One show we handed out mics to the crowd and they told jokes.
He continues adding, “At sold out shows, we’ll get dressed up. When we were touring with Twin Limb, Zack would put on this open vest that he borrowed from Lacey, and Katie will get dressed up in something fancy. When you have a big crowd like that, you can take on a different persona. Crowd sizes and the personality of crowds is important. And apparently people think I’m gay because I’m wearing a onesie on stage. I kind of like it. Let’s do the David Bowie thing: let’s get weird and have people question your sexuality.”
Houndmouth are playing a sold out show this Thursday at The Brown Theatere for a much-welcomed homecoming. If you didn’t get tickets for this, you can check them out at this year’s Forecastle Festival. In the meantime, you can pick up their newest album, “Little Neon Limelight,” which was released March 17. •