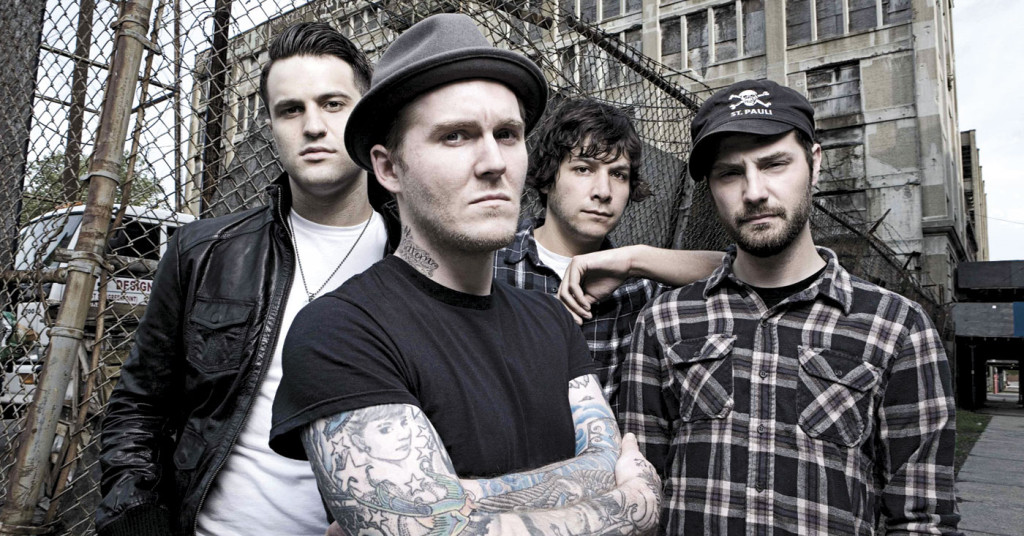 So much more than Jersey Shore punk — but that’s often been the starting place for people trying to pass the word along about The Gaslight Anthem. The quartet’s membership hasn’t changed in nearly a decade together — and because of that closeness, says drummer Benny Horowitz, “especially live, you get in sync. One of the cool things about the rock band scenario is that sort of fluidness and then chemistry between people can really only be done over time.”

Brian Fallon is the frontman and his lyrics often pit literate ambitions against anguished anthemic heartland rock. But, with last year’s album “Get Hurt,” the entire band took several stylistic leaps. They weren’t concerned with whether particular tracks veered toward metal or if others jumped lightly and broke with the usual raw rhythms. The band will be in town twice in the coming months: first up is this week’s visit to Headliners. LEO caught up with Horowitz to ask how the band is moving forward from here.

LEO: You’ve toured for a few months after the release of “Get Hurt.” When the album came out, there was some talk of it being a game changer. Now that you’ve had live audience reaction, how are you feeling about the response?
Benny Horowitz: I know it sounds weird, but any record where we can write it together and work with [a producer] we like, get through the studio experience and put out a record that we all stand behind — that’s all that you really have control over. And once it’s out, it’s out. I do view it as a success, because we did what we wanted to do and it came out good. As far as what’s coming next: definitely something different. I don’t know if it’ll go farther in the direction that we were going, or whiplash back to a different direction.

LEO: In the early years, the band seemed to be looking backwards to find a certain sound and get it tight. That’s a different approach than the reach of most recent recordings.
BH: I think the cool thing about the band in the early days was that a lot of people had a lot of different influences. When we went to write songs, they’d just turn out a certain way. It wasn’t an incredibly cerebral process of what exactly to sound like — it’s just writing cool shit. There wasn’t any directive but just to write good music, get it recorded and get on the road.

LEO: What is your role in band in terms of songwriting?
BH: Drums and arrangements. Brian will usually come up with the bones of a song: vocal or guitar-melody or both. These days we do demos on GarageBand — then everybody goes in, seeing the parts they can write. You write over it and once you start playing together in a room you figure out where to cut or where to add. You start to see how it’s going with the group — and I think that’s where I play most of a role. I’ll never get too involved with Brian’s lyrics or melody writing. I trust him to do the job, and he knows specifically what he wants to say. Everybody in the band has always had a lot of independence as to their own instrument. The structure of the song is where it becomes a more collaborative effort.

LEO: What are rehearsals like, now that it isn’t the first leg of the tour…?
BH: At first you’re getting accustomed to playing the new songs again. But usually, by now, we’re at the point in the tour where new ideas are getting kicked around — but nothing’s really surfaced yet.

LEO: What gets kicked around first? Is it new material or does somebody pick a song for covering onstage? You do some great covers — I loved what you did with [Tom Petty’s] “You Got Lucky.”
BH: The covers are just gonna happen randomly. Usually someone will sync their iPod and go, ‘Oh, Shit! What about this song?’ Our covers usually have nothing to do with our songwriting. With us, an album feeds off of one idea.

LEO: You guys will be coming back to town for Forecastle. That’s July — will you be cutting new tracks by then?
BH: We bought a little machine where we can fuck around with demos, like during sound check. Not like our old records where you were pretty much on the road all the time — “The ’59 Sound” was squeezed inbetween tours. But these days, we’re in a digital age where you can bring ideas to each other without seeing each other, which puts things in a new spin, too. I don’t expect we’ll have recorded new songs by then, but we’ll have some ideas.