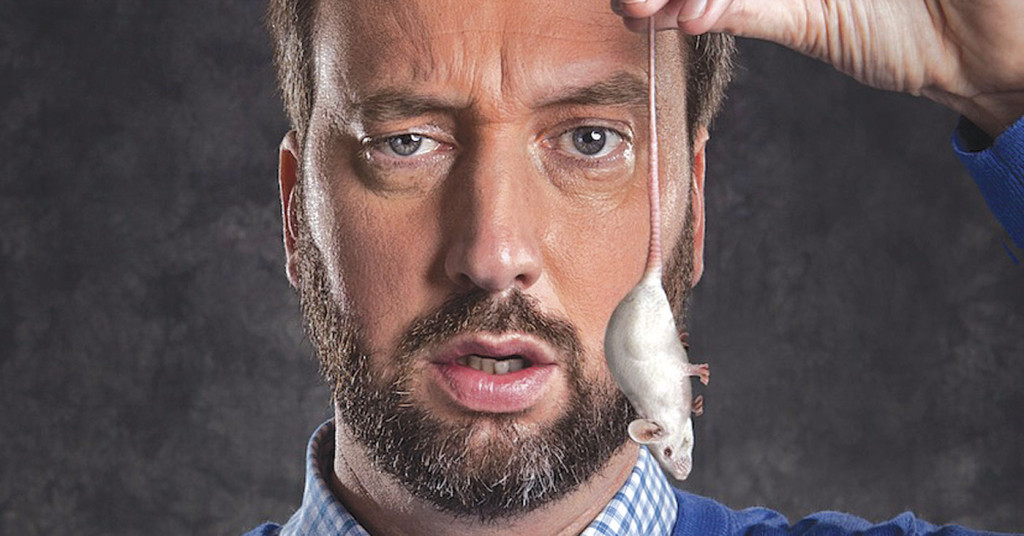 Tom Green is the ’90s face of Generation-X, piss-off-your-parents, I-don’t-give-a-fuck comedy. Or, at least, he was “that guy”. As he aged, like good bourbon, he has matured. This isn’t the same goofball you saw on “The Tom Green Show” or in “Road Trip” or who made the cult classic “Freddy Got Fingered.” Green has turned his attention from the antics of his youth to become a more mature performer, focusing his attention on stand-up and his many web endeavors. Green will perform Friday at The Laughing Derby, and he called in to chat with us about his life and career.

LEO: You started doing stand-up as a teen. How has your writing changed?
TOM GREEN: When you’re fifteen, you don’t have anything to talk about … you don’t have any life experience. And then all the sudden you’re forty, and you have so much crap that has happened to you, you’re angry about everything; the world is a nightmare, and all you wanna do is get onstage and scream about it. It’s just a lot better point of view you have when you’re an adult.

LEO: What can people expect from your show?
TG: The show is very much speaking truth to power, in a lot of ways. I don’t really get into politics, right versus left, Fox News versus CNN, Obama versus Bush, kind of stuff. But I do talk a lot about the societal ills we have. I have issues with our addiction to technology. I have issues with things that might even be more conservative, like people are watching too much pornography in the new media world we’re living in. So I get in to some pretty heavy stuff in my act, but I feel like the more important the topic is, the funnier it will be, because it will resonate more with people in their lives.

LEO: How would you say your taste in comedy has changed from when you started out to what you do now?
TG: The early years of my comedy, a lot of it was very polarizing, I got a great kick out of half the people in the audience being so freaked out at what they were watching. To me that is the challenge, to make everyone love the show. When you come to my show, trying to connect with everybody and trying to get everyone in the audience to laugh. I think stand-up has had a lot to do with that, too; there’s no better feeling than standing on a stage in front of a thousand people and having everyone laughing harder than they’ve ever laughed in their entire life. It’s not nearly as good of a feeling as going onstage and doing shocking, gross-out material, having half the audience disgusted and the other half uncomfortably laughing.

LEO: There may be nothing more loved and simultaneously reviled in your career than “Freddy Got Fingered.” How do you look back on that movie?
TG: That movie was made purposely: I wrote that movie and directed that movie. We were trying to shock so hard. We were happy when half the people didn’t get it, and the other half loved it. The half that got it loved it because they loved it; they also loved it because it was pissing people off. I don’t really like to do that anymore. That is something I think I got out of my system. Now, I like for everyone else to get it.

LEO: Looking at the long arc of your career, it seems like there was almost a pivot of focus after your bout with cancer. Would you agree with that?
TG: Well … it was definitely a change in perspective on things. It was a combination of … you know … things that happened. One thing, when I started my show, I was in my early 20s. I had complete desire to smash the conventions of television, to confuse the audience, shock and amaze people with absurdity of what I was doing; and that was definitely a big part of it. And when I got cancer, I was able to stop, take a breather for a minute, and think about life, and think about everything I’m going through in my life … some things just become clearer to you after you’re a cancer survivor.

In addition to that, fifteen years have passed. I’m older now. I want to take on heavier subjects. I want to do more meaningful things and not just go for the crazy reaction from the audience and maybe have people walking away feeling that their perspective on the world has changed a little bit. That’s important to me, to connect with people on a deeper level, get them laughing and thinking.