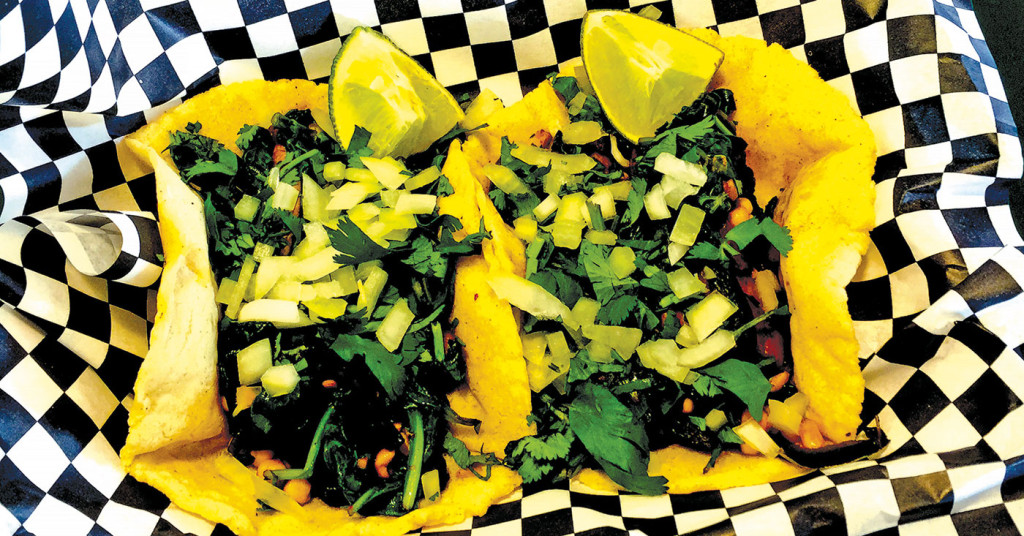 After quite a few years writing a weekly column about food, I’ve learned a thing or two. For instance:

All these things seem to make good sense. But sometimes good sense smacks up against reality, as it did this week when Mary and I in turn were struck down by that virus that’s going around. You probably know the one: The flu-like malady that sneaked around this year’s brand of flu shot, smacking its victims upside the head with an unwanted surprise.
My bride went first, leaving me without an eating partner for this week’s review. I thought about inviting a friend, but decided that wouldn’t be wise with contagion on the loose.
So, what does a person eat when dining out solo? Tacos, of course! They’re portably delicious, and you can eat just a couple or buy ‘em by the sack. Also, taquerias tend to be friendly places, where you can chat up the taco-making folks if you’re there on your own. Yep, tacos it is!
But wait! Where’s the love for pizza? It is, after all, nature’s most perfect food, offering all your basic food groups on an appetizing bready round.
Now that I thought about it, why shouldn’t I do both? I looked around, and the taco choice was easy: The Ville Taqueria makes good stuff, and it’s an easy jaunt from here.
Pizza? That took a little more thinking. I was already focused on St. Matthews for the tacos, and this prewar suburb-turned-nightlife-zone has become one of the region’s most pizza-rich environments.
But which pizza? Even Mellow Mushroom is exceptional for a chain eatery, and DiOrio’s and Coals rank high on my best-pizza meter. I love Coals for its New York-style coal oven and the charry, sweet caramelization that it imparts to its artisan bread base. But DiOrio’s advertises pizza by the oversize slice, and that fit my mood this time.
So, I came, I saw, I ate tacos and pizza, and I was happy. Then, just as Mary was getting better, I was slammed by the Evil Virus of ’15. How in the heck can you write about food when you can’t stand to see, smell or even think about eating? This is not an easy task. Still, see the basic rules above: When the going gets tough, the tough get going to feed the deadline monster, so let’s have some … unnggghh … whatever.
Fortunately, The Ville Taqueria is just about tempting enough to restore even a diminished appetite. Since arriving last autumn in the former home of Carolina Seafood, it has drawn a faithful following.
Fabian Garcia, the owner and chef, grew up with Mexican food with his parents, who own the El Caporal restaurants around town, and his skills show in the quick but tasty Mexican street food goodies that offer a worthy late-night alternative to all the pizza in this nightlife zone.
Ordering is simple: Choose tacos, burritos, quesadillas or tortas, then take your pick of fillings from beef, chicken, pork, shrimp, fish, veggie or breakfast. Prices range from $3.50 (for a single taco, but I’ll bet you can’t eat just one) to $10 (for the El Padrino burrito or a fajita-style quesadilla).
We’ve eaten our way through most of the menu, and I can’t recall ever being disappointed. Carnitas, spicy and tender Mexican “pulled” pork and the crisply fried fish are both memorable, so are the veggie options. I summoned a brace of veggie tacos loaded with the beans and spinach, mushrooms and roasted poblano peppers and sweet niblets of white corn.
My solo lunch, with the sweet consolation of a Mexican horchata rice drink, came to a laughably low-end $9.54, plus a few bucks for the tip.

The next day, still feeling fit and hearty, I reported for duty in a driving rain at DiOrio’s Pizza and Pub. Going into its fifth year in the former home of Karem’s Meats, DiOrio’s has become a fixture, and if its comfortable, pubby venue with multiple big-screen TVs seems a bit more like Cheers than an Italian hideaway, no one is complaining about that.

It offers more than just pizza, with a good selection of calzones, lasagna, fried ravioli, not to mention pub grub like wings and fried-pepper rings. But I came for pizza, and was deterred from my plan to consume an oversize slice only by the discovery that I could get a whole 10-inch pie for lunch for about the same price. (On the other hand, if you’re feeling exceptionally peckish — or planning a party – you might consider the 30-inch “Gibbon” with everything, such a deal at $62.99.)

It’s a good pie, too, with a decent bread-style crust, not too charry, topped with a rich, slightly sweet tomato sauce and plenty of molten mozz’, along with my choice of mushrooms and onions. It was a good deal indeed at $7.99, including drink, plus $1.16 for the second topping.