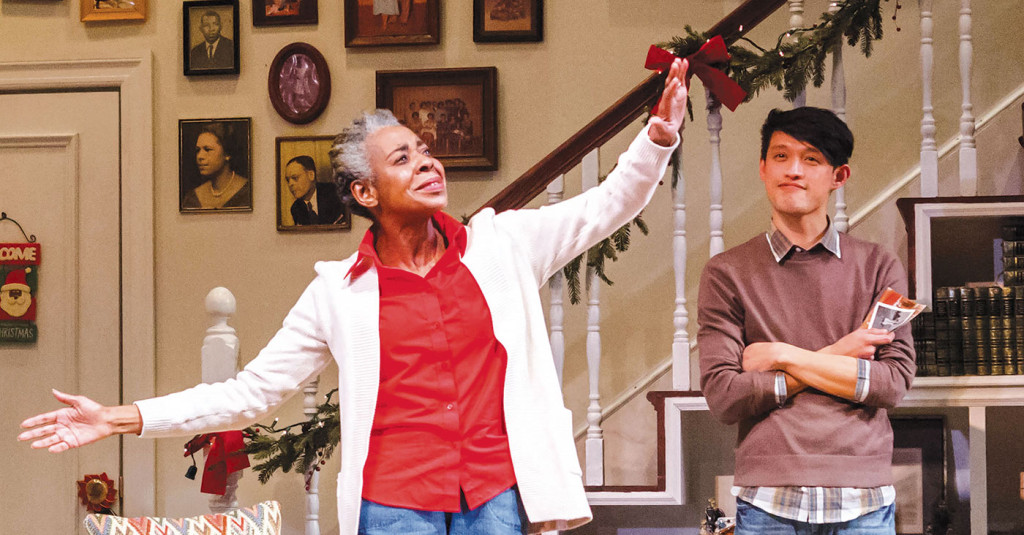 We are our memories. We store them up like a fragile treasure, moment by moment, layer by layer. We’re constantly sifting through them, re-examining them, re-sorting them, in the hope we can understand the present or divine the future. And we’re incessantly sharing them with others in every imaginable social context.

We recognize that memories – especially the memories of others – are malleable and uncertain But even so we trust that – with some acceptable margin for error – we can rely on our own.

The matriarchal figure at the center of Colman Domingo’s new play, “Dot,” which opened last week as part of the Humana Festival of New American Plays and the Brown-Forman Series at Actors Theatre of Louisville, has reached that point. For her, memory is a treacherous landscape where at any moment familiar ground can give way to a black crevice where even the most vivid or recent memories disappear into utter blackness.

People respond to encroaching dementia in different ways. For Dot, as the play opens, it’s a source of anguish and an embarrassment to be concealed. But it also fuels a desperate awareness that her memories are the most valuable things she has and an urgent drive to pass them along if she can, to her grandson Jason – who looms over the play like an uncertain, unseen future.

In the title role, Marjorie Johnson is stunning. Domingo’s Dot is a formidable character with a rich backstory that’s deftly woven into the fabric of the play. She and her late husband were neighborhood pioneers – among the first African-Americans to move into what was once a solidly middle class neighborhood in West Philadelphia. (The technical professionals, scenic designer Dane Laffrey, lighting designer Mark Barton, and sound designer Christian Frederickson, do an outstanding job of placing us in the environment).
Dot was active in politics, she nurtured the talents and creativity of her children, and even now, when her neighborhood is in decline, she feels a strong sense of duty to put it back on track.

Dot also possesses a fine, swaggering wit that Johnson captures with perfect timing. But if her “comic timing” is perfect, it’s her execution of “tragic timing” that will leave you wiping your eyes. One moment she’ll be cruising along on a droll roll, bantering with her long-suffering caregiving daughter Shelly (Sharon Washington), then she’ll stop, her eyes suddenly haunted and empty.

The action plays out a couple of days before Christmas, and with the season, family and friends are returning home. For Shelly, who is frustrated, sad and fearful about her mother’s decline, it’s a chance to fight for the help she needs.

For the audience it’s the assembly of a fascinating group. First on the scene is Jackie (Megan Byrne), a volatile, vulnerable friend of the family and the high school sweetheart of Dot’s middle son Donnie (Kevin R. Free), who shortly after their relationship discovered that he was gay.

Donnie and his husband Adam (Sean Dugan) have a relationship fraught with love and tension (some of the tension stems from the fact that, in a case of colossally-comic bad timing, they’ve started a “juice cleanse” just before the classic holiday feast. In addition, there’s flamboyant, larger-than-life youngest sister, Averie (Adrienne C. Moore, of the Netflix series, “Orange is the New Black”) who brings a riotous presence (and some riotous colors, thanks to costume designer Connie Furr Soloman) to the party. And finally, there’s Fidel (Vichet Chum) a gentle, soft-spoken refugee — from “Kayakeestan,” says Dot — whose patient, compassionate care for Dot stems from a deeply felt link.

Domingo occasionally introduces elements that — important as they are — feel more didactic than theatric. There’s a mini-lecture about civic responsibility that seems more directed at the audience than at those on stage. And there’s an incompletely fulfilled episode where Donnie reluctantly dons goggles, gloves and headphones in order to simulate what it’s like to live with dementia. But under Meredith McDonough’s fine direction, this is a play where every character offers us moving epiphanies, not just about dementia, but about memory in all its glory and pain. And perhaps the most powerful lesson comes from Shelly who comes to understand that as tragic as it is to forget, it’s even more painful to be forgotten.

‘I Will Be Gone’
Erin Courtney’s new play, “I Will Be Gone,” directed by Kip Fagan, also opened as part of the Humana Festival this past weekend.
It’s a mess. An ambitious mess, perhaps, but a mess nonetheless. Courtney’s script is basically a tangle of subplots — some trendy, some witty, some promising — without a center. Is it a gothic coming-of-age teen comedy complete with ghosts? A moral rumination on the ethics of abandoning old friends? A love triangle? A family drama about a middle-aged woman who doesn’t really feel up to caring for her suddenly orphaned niece?

The action is set in California in a small town near an abandoned mining town that’s become a protected tourist destination. It’s literally a “ghost town,” or at least there are lots of people who think it’s haunted.

The folks who live nearby include juvenile, philandering, punk-rock drumming Mayor Liam (Alex Moggridge), his stern spouse Liz (Rachel Leslie), Liam’s once and future flame Josephine (Birgit Huppuch) and Josephine’s teen-aged niece Penelope (Amy Berryman), whose mother, Theresa, has recently died. Penelope’s friend and love interest Elliot (Seth Clayton) is a lanky, goofy, recovering addict. There’s also Jim, once a brilliant math wizard (and close friend of Liam and Josephine) whose schizophrenic break a couple of decades ago reduced him to wandering the town muttering gibberish and doing small jobs. In backstory segments, we see the young Theresa (Lexi Lapp), young Jim (Hernando Caicedo) and young Josephine (Elise Coughlan) doing youthful things that might or might not have something to do with the present.

Thanks to scenic designer Andrew Boyce, lighting designer Paul Toben, sound designer Daniel Kluger and costume designer Kathleen Geldard, there are ghostly apparitions, earthquakes (because maybe that mine is cursed and haunted) and the makings of a quite amusing Halloween party. And thanks to very charming performances (it really is quite a fine cast), the two hour running time passes quickly enough (despite a couple of very unusual opening night tech glitches).