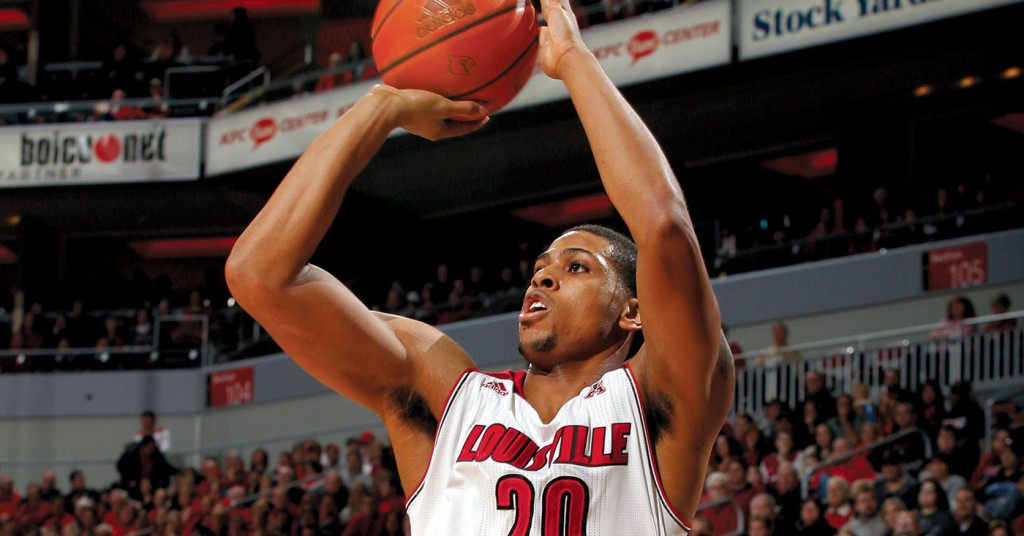 Wayne Blackshear | Photo Courtesy of U of L Athletic Department

The other day came the announcement that than seven University of Louisville men’s basketball players have been named to the 21-man All-ACC Academic Team.

No. No. Just kidding. Academic achievement is an admirable thing for scholarship athletes who must devote so much time to their sports. And not in any way an inhibitor of basketball success. Just note the strong scholastic marks posted by UofL basketball players over the past few seasons — complementing the team’s spectacular win-loss rate. The 2013 National Championship team included two players, Peyton Siva and Wayne Blackshear, who earned national awards for scholarship by top athletes.

The only reason we begin a story that is supposed to be about the upcoming NCAA mens’ basketball tournament — and Louisville’s chances in it — with an all-academic team is it brings to mind an old tale of books and basketball about a player called into the office of Texas A&M coach Shelby Metcalfe with a semester grade report of Four F’s and one D. “Well, son,” said Metcalfe, “it looks to me like you’re spending too much time on one subject.”

And goodness knows a little levity might be a good thing for Louisville fans about now. After their Cardinals appeared to have found their way through a rough patch with a rousing season-finale victory over No. 2 Virginia, Louisville couldn’t hit the broad side of a barn against North Carolina — bowed out one-and-done in the ACC tournament.

Now they’re right back where they’ve been since Christmas: able to beat the ordinary teams, but only occasionally able to knock off a Top Ten squad. The victory over Virginia, coming just on the heels of the shocking dismissal of a key player, felt good. Very good. Especially with unsung center Mangok Mathiang swishing the winning bucket. But then it was back to the same old thing against North Carolina. The same problem it had against Kentucky, against Notre Dame, and against Virginia the first time the teams played.
And against Duke.

A basketball bugaboo nearly every time. Louisville is molded as a defensive team by coach Rick Pitino. That’s how he casts college basketball. Every player who takes the court in a Louisville uniform for Pitino must begin by playing defense. (Maybe spending too much time on one subject.)

The picture seen in the mind’s eye is of Louisville’s fast breaking NCAA Final Four teams, and it’s 2013 championship. The game begins with defense, and the scoring will come along, don’t worry.

And it does against Florida State and Virginia Tech and the second division of the ACC. But not against Duke and Virginia – not to mention North Carolina State and Notre Dame. To beat those teams, Louisville has to score … and it can’t. Because it can’t shoot. (Maybe put a little more arc on the ball, as we’ve suggested previously.)

How bad is it? Well, several times this season the Cards haven’t gotten to 20 points in the first half. One game we heard they got 13. Probably not true. But another time we personally saw the number 18 under “Louisville” on the Yum! Center scoreboard. Holy moly! A commentator noted that such lack of scoring was something “unheard of in the Pitino Era.”

Pitino Era? Heck, that’s the only era when it’s ever been heard of.

I don’t think anybody remembers a Denny Crum team scoring under 20 in a half three times in a season. One time Cincinnati stalled (before the shot clock) in the final of the Metro Conference Tourney in Freedom Hall, but Louisville still won 42-31. Before Crum, John Dromo’s teams scored with style, and Peck Hickman’s teams consistently shot and hit at a high percentage, ranking with the best-scoring teams in basketball. That gets us to World War II.

But you can’t blame Louisville’s current Cardinals. They play hard every game. May not have the outside shooting, but Terry Rozier is a terrific player, and Montrezl Harrell has been an unbridled joy to watch. Unbridled joy.

In fact, Louisville (24-8) plays just as it is ranked – right around the 15th best team of 351 Division I teams. The Cardinals beat the teams they are better than, and play tough against top-ranked clubs. Very tough. Every time.

Looking ahead (why not?), guard Quentin Snider plays into the fire of the game, and 7-foot center Anas Mahmoud (wish he’d gotten some playing time this season) could develop into one of college basketball’s premier shot blockers. Rozier has a starring season coming. Hope springs.

The big problem for everyone is the state of the college game, which is bogged down now by defenses that smother offenses: “We’re going to stop you more than you can stop us.” But scoring is the real beauty of the game, and it’s missing. A team like Louisville, that is pretty good defensively, but “offensively challenged,” as its coach says, is just going to be a notch below teams that can get a big bucket when they need it. A clutch three. One longs for the olden days, when Indiana coach Branch McCracken explained that, “It isn’t how many you keep them from scoring, it’s how many you score yourself.” And Kentucky coach Adolph Rupp declared, “There are only two great plays, South Pacific, and put it in the hole.” Those days are gone, or presently missing. Not surprisingly, attendance is down in college basketball.

Stifling defense has slowed the game before. Veteran fans might recall Georgetown beating Louisville 50-46 in the 1982 Final Four in New Orleans. 50-46? That was a nadir of basketball beauty. But the colleges cured that with the three-point shot, and we expect they’ll do something soon to open up the game again. But it won’t be this year.

There’s no waning interest at Louisville. UofL fans will don their lucky red uniforms and be ready for Louisville’s 41st NCAA appearance, Friday, March 20, vs. University of California, Irvine, in Seattle. Just as we hope their team will be. At this time of the year, some teams are worn down, worn out. Ready to call it a season. The useless conference tournaments contribute to seemingly endless seasons. Do you remember Louisville’s first game this season? Where it was? Seems like a long time ago the Cardinals beat Minnesota in Puerto Rico, doesn’t it?

Louisville, it says here, will do in the tourney what it has done all along: play hard, and effectively. Maybe win one or three games before the shots don’t drop often enough to keep going.

And for the record, those seven Louisville players who made the All-ACC Academic team are Wayne Blackshear, Montrezl Harrell, Anton Gill, Mangok Mathiang, Chinanu Onuaku, Terry Rozier, and Quentin Snider.

Who will win the 2015 NCAA tournament? Kentucky should win, and be most deserving. Kentucky has the talent, and especially the height. One thing Kentucky coach John Calipari has been successful doing (besides corralling talent) is utilizing his two-platoon system to keep his many stars smiling. The clever thing about sending in an entire new five every four minutes is not how it gets players INTO the game, it’s how it enables Calipari to get good players OUT.

The one team that has a chance to top Kentucky is Duke, with Jahlil Okafor. Basketball is a team game, but it is also a star game, and Okafor is a star.

Wisconsin usually finds a way to go home early, but this might be the Badgers’ year to keep marching. “On Wisconsin!” Seven-foot Badger star Frank Kaminsky scores from anywhere. After that, Virginia is very solid. Villanova … a big if. Maybe Ohio State, with Louisville native D’Angelo Russell. We’d love to tab Gonzaga, headed by slick-shooting forward Kyle Wiltjer, but the game isn’t set up for high-scoring teams.

If you are looking for bracket busters, let’s recommend Northern Iowa, and Seth Tuttle. And maybe little Belmont, which nipped Murray in the OVC tourney. In that game Belmont hit 15 threes. And don’t forget Butler.

The tourney’s first rounds should be a blast, as always. Wasn’t it fun the way ESPN used to switch from one game to the other as the seconds ticked down? CBS won’t switch. The Regionals have always been our favorite: Destinations afar: Houston, Nashville, the Roundhouse in Wichita. The NCAA Regionals vibrate with tension and explode in dramatic plays.

But the tournament is a stacked deck. Seeding is unfair. It’s undemocratic. It protects the top teams – and keeps them separated for an all big-shot Final Three, plus a Cinderella.

Reader Allen Cheek has a suggestion that’s a lot more intriguing than pulling 64 names out of a hat to make the pairings. “What the NCAA is very good at is ranking the 64 teams,” says Cheek. “They could use that to make four evenly-matched Regionals of 16 teams each. Then have a draw. That would be fair, and fun!”