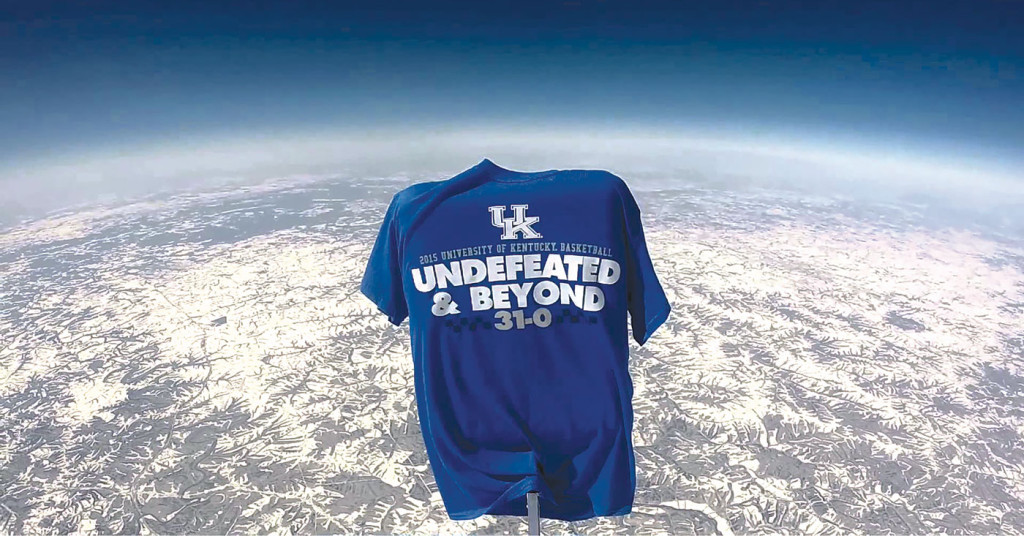 First, I want to say that this article is supposed to be fun, and we UK fans mean no offense … Like this year’s Louisville Cardinals. Ha!

Since I was a boy, I have been a fan of the University of Kentucky basketball team. I love what Big Blue Nation stands for, and all the things they do for the Commonwealth of Kentucky. Case in point, Richie Farmer.

Richie Farmer is the greatest man to bless the University of Kentucky basketball team. He is also the greatest Agricultural Commissioner we have ever had. To think that any individual would be upset that Richie Farmer did anything wrong, immoral, corrupt or to harm the Commonwealth of Kentucky, home of the Kentucky Wildcyats really burns me up. I was once at a luncheon where Mr. Farmer also had lunch, and it was the greatest day of my life, and all of the other children who were also eating lunch.

Question: In a fight between Richie Farmer and God, who would win?

While we are on the subject of all time greats, how about that sweet-sounding voice of Cawood Ledford. A tear comes to my eye every time I pull out my tape player and listen to my cassette tape of his last game versus that damn Duke team. To think that the greatest voice in the history of listening had to call that as his last game should be reason enough to take that Laettner out to the green pasture and put him out of his misery. [Which, side note, if anyone knows how to convert cassette tapes over to CDs, I have every game Cawood called since I was born (even as a baby, I knew it was important to have everything he said on tape)].

I am so grateful for the opportunity to write and explain how important the Kentucky Wildcyats are to me, Big Blue Nation, and the world of college basketball — around which the sun, the moon and the stars revolves. Let me start by saying, Big Blue is in my blood. No, seriously. My mommy and daddy got married right be fore the Cyats beat Duke in the 1978 Championship game. After Jack “Goose” Givens — or “Dear old Goose” as mommy called him — scored 41 points and the boys in blue defeated the dirty-blue Blue Devils of Duke, my mommy and daddy celebrated. Nine months later, I was born — Rupert Hall Cooper, but my friend’s call me Rupp.

Since then, Kentucky has been with me at every major event in my life. At prom, my date and I danced and fell in love to the song Monster Mash, the theme song of Kentucky legend Jamal Mashburn. We would later marry. Our first dance was to “On, on UofK”. That night, my wife and I made sweet, sweet love. And what was there with us? A bottle of Kentucky’s finest… had KY right there on the bottle. Nine months later, our two boys were born — Richie Farmer Cooper, and Richie Farmer Cooper Jr. 34 seconds later … beat the shot clock.

In fact, as part of our vows, my wife and I promised each other that, should one of us get the opportunity, we must include relations with Ashley Judd or Richie Farmer. As the Kings and Queens of Britain had the rights to anyone in their kingdom, so too does the Royal Family of Big Blue Nation. We love you Queen Ashley and King Richie.

Moving right along, I have to admit that there was one time I felt betrayed by a member of the Big Blue family, and that was when we had to put an asterisk on our 1996 Championship banner, which still hangs in our den next to the other seven. I have never been so hurt as I was when coach Pitino went to the annexed territory of Louisville, which is still regarded in these parts as part of Indiana that broke off and floated to our side of the Ohio river.
But Pitino cut me bad. I had nightmares for a long time. If I had to come up with a nightmare team, the staring 5 would be captained by the anti-Christ Christian Laettner. I hate that goddamn Christian Laettner so bad I could spit. Sorry honey, I did not mean to use the good lord’s name in vein … That gosh darn Christian Laettner should burn in hell for stepping on our boy, Aminu Timberlake. We love you Aminu. We will never forget.

And you know what? Last time I checked, you can’t spell DUKE without UK … bitches.

The rest of the No-Dream Team would include Montrezl, the entire “Fab Five,” Miles Simon and Calbert Cheaney — who has disgraced the good American Cheaney name. They would be coached by Rick Pitino, and his assistants would be Mike Krzyzewski, Bob Knight and Billy “Boozer” Gillisp- Gillispe- Billy Gi-
…excuse me. I just threw up in my mouth.

Actually coach K would have to be the head coach, and Pitino the assistant. I hate that Kzyzewski so much that I do not even recognize the U.S.A. Olympic gold medals under him. In this household, we root for the Dominican Republic national team, coached by the greatest coach since Adolph Frederick Rupp, Head Coach John Calipari. Coach Cal, we love you.

Ask Coach Cal: What is 40 minus zero?

He will tell you, the correct answer is nine; As in we are going 40 and oh, and winning our ninth title.

But this year’s Cyats will go down as one of the all time best basketball teams in history. Right up there with the “Comeback Cyats.” It was the “Comeback Cyats” where Richie and Richie Jr. learned what “never give up” really means from watching the VCR as Cameron Mills drained a beautiful three pointer against the evil empire of Duke. Suck on that coach K. I heard after the game, Cameron came out to lead a prayer for all the souls of Blue Devil fans, which shows why he went on to become a pastor. He’s a better man than me, because I believe there is a special little spot in hell for the Blue Devils, along with Edgar Sosa, Pat Forde, Joakim Noah, Jeff Goodman and that damn Digger Phelps, but I’m working on it. I’ll never forgive or forget Billy Packer. Suck it long and suck it hard Packer.

I just hope this team finishes what they have started. UNDFTD as me and Andrew Harrison’s shirt says. Which speaking of, my wife and I are thinking about having kids again. We are shooting for twins. Well, I will be doing the shooting but you know what I mean. Ha ha. Ha ha. Of course, should these boys do it, and my boys “do it,” Big Blue Nation can expect another Andrew and Aaron championship duo to one day walk through the halls of Rupp Arena.

The perfect season. What an accomplishment. I can’t wait to load my pick up up — bought from Paul Miller Ford of course — with our new couch and make the long haul to the University Avenue and set that bad boy on fire. Long live these Cyats and screw you again Cards. Ram that stupid “L sign” where the sun don’t shine. Half y’all have the “L” going the wrong way anyway.

Plus, don’t you find it coincidental that the boys need six more wins for their ninth title? Six is like nine looking in the mirror, upside down. And we all know what happens when six meets nine … everyone wins. Git it? Ha ha. Ha ha.

We love you Cal. God bless you. God bless our Cyats. And God Bless America.

Speaking of, if red was not in the American flag, we would not recognize it as an official color. Go Blue.

Oh, and P.S., if you ever need a lawyer, do not be afraid to call the offices of Willie Cauley Stein. That boy good!!!