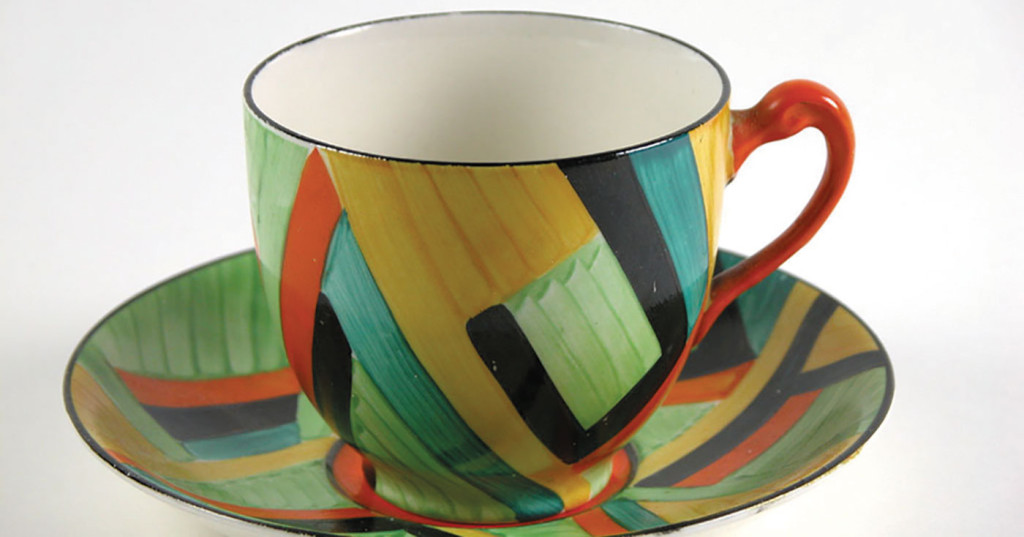 'Cup and Saucer' by Susie Cooper

What is it about teapots that make collectors go crazy? They have an obvious function, yet are rarely used to actually pour tea. I have to admit I am one of the crazed, with pots scattered around my house by local artists Laura Ross, Laura George and Tonya Johnson, just to name a few. So here I am, waiting impatiently to see the Speed Art Museum’s “Teatime Chic.” I’m happy to report that it’s an exhibition that excels in stirring the love of the pot (no teabag required).

The tea services — and their cousin, the coffeepot sets — are displayed like the tabletop sculptures they have become. With a focus on 20th century European and American styles, the ceramics range from Art Nouveau to Mid-Century Modern, representing what was cutting-edge for its time period. They were certainly not the standard serving sets at the time of their creation and many would still get a reaction today.

The ceramics are arranged in chronological order from the 1900s to 1960s. Visitors are immediately thrown into the organic frenzy that is Art Nouveau. Leon Kann’s coffeepot from 1900 is constructed like a plant. Overlapping leaves form the pot, with a swirling leaf shaped into a handle. A resting bug functions as the lid knob.

Another set from around the same time is simpler. The red and white disc-laden tea and coffee service by Jutta Sika is typical of her style of Viennese Art Nouveau.

The heyday of geometric design arrives with Art Deco. Good examples from the 1930s include Eric Slater’s cups and saucers with fan handles and Margarete Heymann-Marks Lobenstein’s tea service fashioned with round discs as holders.

Viktor Schreckengost, famous for his Art Deco masterpiece “Jazz Bowl,” has a 1950s teapot in the show. While it is mildly unusual with its tilted spout and genie-lamp appearance, it pales in comparison to what he had done before. However, you will not be disappointed in the Susie Cooper works in the exhibition. There are eight examples, with most from the 1920s-‘30s. It’s always a pleasure to see her strong, colorful designs.

Frederick Hurten Rhead is well known as the creator of the popular “Fiesta” line of dinnerware for the Homer Laughlin China Company. He also designed the mid-‘30s “Harlequin” (represented in the show by a cup and saucer), a set that resembles “Fiesta” but is more sharply geometric.

Another popular artist of home wares was the industrial designer Russel Wright. Along with his wife Mary; they were the Martha Stewarts of the mid-20th century. While his “American Modern” line is what he is best known for, the Speed is displaying a teapot from another popular design, the “Iroquois Casual” from 1946.

The iconic “Museum” coffee pot, designed by Eva Zeisel in 1942-43, is a classic in white porcelain. Commissioned by the Museum of Modern Art in New York to create a plain serving set, it established her reputation as a top designer.

The 1960s is well represented by one of the most fanciful and unusual designs I’ve ever seen. Faianta Sighisoara created this tea service in 1965-75. It’s as if blobs of colorful clay melted to form cups with elongated rounded handles and triangular saucers with upraised corners. The entire grouping has a sense of movement, seemingly expanding and shrinking at will. The result is an interpretation of a tea set at its most modern. •