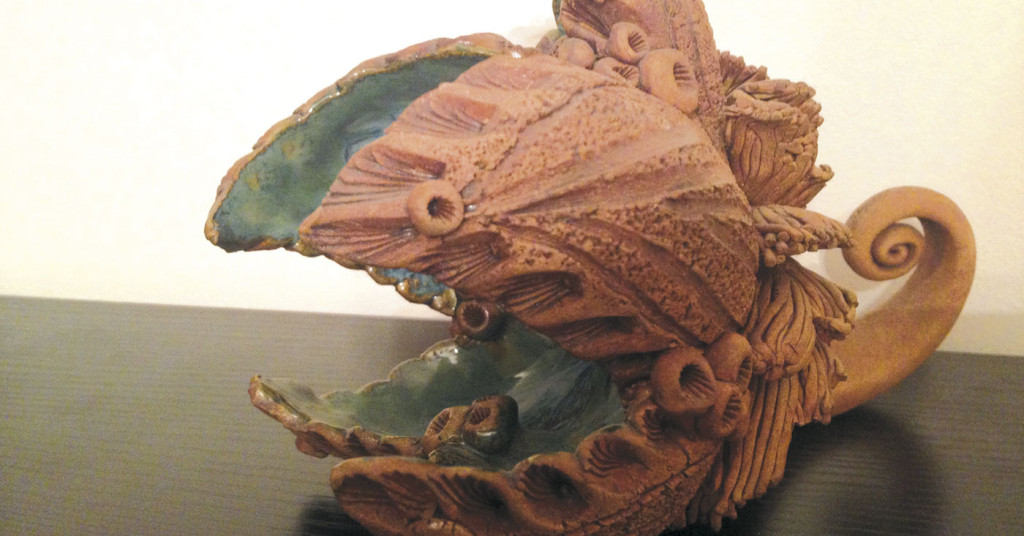 Sarah Owens is a former Louisvillian (as well as a future one) who is giving a talk on Wednesday, March 4 as part of IDEAS’ “Who’s Louisville?” project at Zephyr Gallery. Once a visual artist, she’s now specializing in baking, having lost none of her creative passion in the transition.

LEO: I remember you as a ceramicist in Louisville but that was years ago. To reintroduce you to the LEO readers, what is your background?
Sarah Owens: I hail from the red-clay foothills of East Tennessee until I left for college in 1996. Moving to Louisville and enrolling in Bellarmine [University] was a big step. I came from a small rural community and Louisville was a way to expand my social and cultural experience. Initially, I majored in business but ended up switching to studio arts instead.

LEO: Why the concentration on ceramics?
SO: My work in clay was a direct reflection of what influenced my personal evolution. Nature and a deep, innate connection to its rhythms has always played a strong role in my life. Ceramic sculpture was a way to not only honor that connection but also develop the relationship. Although I do not use clay currently as a medium of expression, this idea of living your work has carried through to the growing, baking and writing. I have chosen a professional life that, regardless of the medium, is a meditative practice dependent upon many outside influences including humidity, temperature and the unpredictability of and reaction to both. Ceramics was the initial realization that I could indulge in this meditation without sacrificing a lucrative career.

LEO: What have you been doing since you left Louisville?
SO: Well, that’s a long and complicated answer. But at the root of it is the desire to live in tune with the seasons and try and find a way to support myself professionally by doing so. I left Louisville in 2004 when I was in my rowdy twenties. At that time, I felt like I had exhausted my channels of expression here.  It isn’t a criticism of Louisville, just where I was creatively and personally during that time. I moved back to Tennessee, built a studio and then realized I had pigeonholed myself into a recognizable style and expression. At the same time, I realized I wanted to develop a broader set of skills but I didn’t want to sacrifice passion in doing so.

LEO: That must have taken some soul searching. What did you eventually come up with?
SO: In January 2007, I enrolled in the New York Botanical Garden’s School of Professional Horticulture, where I earned a certificate in Horticulture. During that time, I cultivated a healthy obsession with heritage roses and, somewhat miraculously, was hired into my dream job as curator at the Brooklyn Botanic Garden. I became a total plant nerd!

LEO: Why the shift to baking?
SO: In 2010 I experienced digestive symptoms that interrupted not only my personal life but my professional performance also. I consulted doctor after doctor who all had the same approach — pharmaceutical medication. I refused to accept that treating the symptoms would solve the core problem and instead took a more holistic nutritional approach. It took some time to cut through the dietary fads, heal my gut and understand the processes of fermentation as a benefit to digestion. That’s a very simplistic way of putting it actually because there was more to it than that, leading to an eventual adoption of an overall slower lifestyle.

I began sharing what I was baking with my colleagues and friends and the positive response was more than I could have imagined. Because bread dough is a living thing that responds to the elements, it is very much like clay in this sense. The bread began not only fulfilling a need for delicious, accessible nutrition but also a desire to be expressive and create an aesthetically pleasing, tactile thing with my hands.

LEO: What will you be discussing in your presentation for IDEAS?
SO: The talk on March 4 will give some context as to what I have been doing from the time I left Louisville to my return, focusing on the pertinent details of culinary arts and garden design and now bringing the two together in a new business venture here in Louisville.

LEO: So you’re moving back to Louisville to open a business?
SO: IDEAS has allowed me the chance to evolve professionally by sponsoring the opportunity to develop the next phase of my brand as a creative right here in Louisville. Specifically, I will continue writing cookbooks but now with an eye turned toward regional, whole food ingredients grown myself or from local farmers. Additionally, I am starting a new venture called Farmstead Flora, using eight years of botanical garden expertise to farm specialty cut flowers. As a way to test the cut-flower market and continue to have an excuse to bake, I will be connecting to my community through farmer’s market sales in June as well as a limited subscription service for bread and flowers.

LEO: How will that work?
SO: If you would like a loaf of bread or a custom bouquet of seasonal, organic flowers delivered to your lover, mother, boss or brother, I can make them feel pretty special on a weekly, bi-weekly or monthly basis starting in June.  Most of all, I look forward to providing flowers to the cadre of talented florists of this region whose clients desire a unique, seasonally-inspired and environmentally -conscious design. Eventually — this will take some time — I would love to develop a line of beautiful custom ceramic vases to accommodate the botanicals I grow. That would be the ultimate full circle evolution!

LEO: You have a cookbook coming out in the fall. What’s the focus?
SO: The cookbook [is titled] “Sourdough: 108 Recipes for Rustic Fermented Breads, Sweets, Savories and More” [and the] release date is Nov. 3. It is a botanically-inspired baking book using naturally leavened seasonal recipes as a vehicle for health and wellness. I hope this book inspires readers to take the time to slow down and create something beautiful while celebrating the seasons through whole foods.