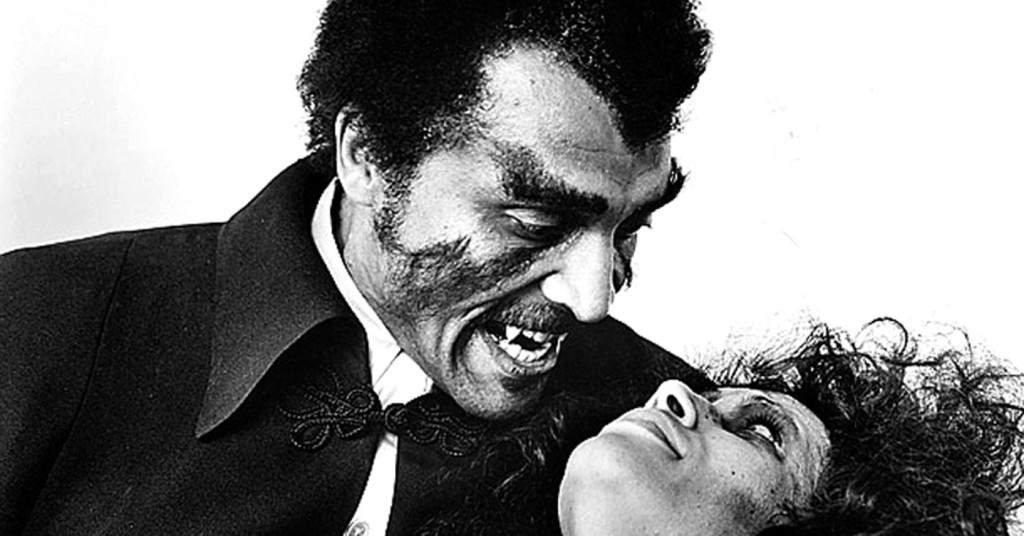 BLACULA/SCREAM BLACULA SCREAM
$17.98-24.97; PG
A wonderful Blu-Ray pairing of two of our favorite ’70s stinkers! William Marshal stars, of course, as Blacula, a former African prince bitten by Dracula (Louisville-lad Charles Macaulay who appeared in over 80 movies and TV shows before his death in 1999), cursed to forever search for the reincarnated soul of his beloved Luva (the great Vonetta McGee). The second feature finds Blacula resurrected by Voodoo – and sucking on the neck of The Black Beauty, herself, Pam Grier! Nice work if you can get it. (Marshall also starred in 1974’s “Abby,” a black version of “The Exorcist” filmed entirely in Louisville by locally-born writer/director William Girdler.)

THE HUNGER GAMES: MOCKINGJAY – PART 1
2014; $17.78-39.99; PG-13
Local lass Jennifer Lawrence completely dominates this next-to-last cinematic entry in author Suzanne Collins’ Young Adult dystopian series, though the actions of President Snow, portrayed in cold insanity by Donald Sutherland, move this far beyond its YA-reader roots. And then there’s Julian Moore’s calculating President Coin, who sweetly sways JLaw to give the people something to rally around, yet ultimately manipulates her as painfully as Snow. A perfect blend of gut-wrenching sacrifice and heroism, mixed with all the dirty bits that real war implies. Simply flawless. (Available Saturday 3/6 instead of the usual Tuesday.)

Other DVDs of Interest
A PLACE TO CALL HOME, SEASON 1
2015; $33.98-59.98; UR
An intimately personal story of power – that you possess and that you confront – and the notion that it is possible to harden yourself from its dark influence without sacrificing your humanity. It’s also an unrepentant TV chick-series, with Marta Dusseldorp (“Jack Irish”) as an Aussie nurse returning home after living half her life in Europe. Set in the post-war 1950s, she has converted to Judaism, then meets wealthy widower George Bligh (Brett Climo, “Snowy River”) and his controlling mother (Abby Earl, “The Great Mint Swindle”). The man is clearly smitten, but mom will not brook such an unseemly dalliance.

ALGORITHMS
2013; $27.98; UR
An exciting doc on the truly unique world of blind chess players. Since the chessboards exists – for them – only in their heads, each move requires a level of concentration and memory unparalleled in any other game we know. Now add to this difficulty the fact that these particular kids are in India, a place where poverty and centuries-old class oppression has spawned the highest child-mortality rate of any industrialized nation. Follow them on their trek to the World Junior Blind Chess Championship, along with the adult visionary who believes that all blind children the world over should be taught to play.

FOXCATCHER
2014; $22.98; R
Funny man Steve Carell received an Oscar nomination for his portrayal of the late bazillionaire industrialist/nut job, John du Pont, whose hobby was supporting/training Olympic wrestlers in this impressive 2+ hour bio-drama. The recipient-brothers of his largess, Channing Tatum and Mark Ruffalo, discover too late they are in bed with an unhinged sociopath, despite warnings from Sienna Miller, Vanessa Redgrave and Anthony Michael Hall. Exceptional, though it probably marks the end of Carell’s comedy career.

LET’S KILL WARD’S WIFE
2014; $16.98; UR
Scott “Gray’s Anatomy” Foley moves into feature-film directing with this off-kilter crime comedy starring Donald Faison, Foley, Patrick Wilson, Amy Acker and Nicolette Sheridan. Faison is the put-upon spouse of bitchy-hot Dagmara “Boardwalk Empire” Dominczyk, a man at first happy when she’s accidentally killed, then horrified when he realizes he’ll be blamed! So he gathers his friends to help him get rid of the body. You just know this isn’t going to end well, don’t you? Nothing here to take seriously – including some comic rear male nudity – but not for the kiddies.

LIFE PARTNERS
2014; $22.98; R
Our vote for Most Underrated Comedy/Romance/Drama so far this year. Lesbian Leighton Meester and straight Gillian Jacobs perfectly play long-time friends/roommies who have reached that perfect symbiotic relationship that we all dream about. Then a penis enters the picture (Adam Brody), forcing Meester to realize that she’s staring down her 30th birthday with nothing much to show for it. More than anything this is about how seeming adults cling to their innocence as if it’s the Fountain of Youth. Gangs of fun with a gorgeous cast.

THE BETTER ANGELS
2014; $14.98; PG
A bio-drama of Abraham Lincoln during those hard, formative childhood years after his family moved from the warm embrace of Kentucky to those cruel and savage swamps of Indiana. First-time actor Braydon Denney does a great job as the young Abe, but the movie is owned by family members Jason Clarke, Diane Kruger and Brit Marling. All the women are angelic, all the men little more than brutal cogs in a social machine designed to mold the future president. Artsy and melodramatic, filmed in B&W to heighten the eternal wretchedness that is Indiana. This makes a nice companion to Spielberg’s “Lincoln.”

More Recommended Videos for our On-Line Readers, Only!

CAPTIVE
2012; $24.98; UR
There have been at least eight movies with this title in the last decade, but this is the only one that features famed French actress Isabelle Huppert (“The Disappearance of Eleanor Rigby”) and is directed by award-winning Filipino director, Brillante Mendoza. She plays a social worker who helps the real star, first-time actress Katherine Mulville, after she and her husband are captured by revolutionaries and forced to trudge through miles of dense jungle, during which she bonds with her captors. The hand-held camera work is nauseating, but necessary.

HILL STREET BLUES: SEASON 4
1983; $24.98-34.98; UR
This season starts with a closeted off-duty Gay cop as the only living witness after a killing in a Gay bar. And even in 1983, if he’s “outted” he’s out of the force and will never be able to work i law enforcement anywhere ever again. But not all is so grim: veteran actor Martin Ferrero – most famous for as the cowardly lawyer who abandons the children only to be eaten on the crapper in “Jurassic Park” – guest stars as a guy who repeatedly causes public hysteria, dressed as the Cisco Kid.

ILYA AND EMILIA KABAKOV: ENTER HERE
2013; $27.98; UR
In a style as grand as any Russian historical epic, this look at that country’s once-most-faithful and decorated artists — now American citizens — is a primer in how to be a true Citizen Of The World. Eventually branded as “decadent”, then banned from displaying his art, we follow Ilya Kabakov as he returns to Moscow to install a series of 6-foot high walk-through public installations, peppered with his vivid recollections of life under Stalin, and Brezhnev, and learn of life during the Revolution (when Russia was considered to be a beacon of freedom and hope for the world) through letters from his long-dead mother.

OUTBREAK COMPANY: COMPLETE COLLECTION
2013; $38.98-69.98; UR
Possibly the most self-referential anime series in history, we enjoy the fresh experiences of a young man, obsessed with all things anime and pop-culture, who wakes up in an alternate cartoon-reality. It seems that the Japanese government has drafted him to be their ambassador to this odd new world! Embracing the rules of capitalism, he imports “real world” products and tech into this universe to bind the two together. A very clever and thought-provoking, yet always upbeat series featuring a beautiful, bosomy werewolf girl, his half-elf maid love-interest, and a jealous child-queen. Joyously animated.

THE INTRUDERS
2014; $14.98-26.98; PG-13
We’ll watch anything with Donal Logue (“Gotham”’s Harvey Bullock) in it, and here we get the extra joys of Tom Sizemore and former Disney kid, Miranda Cosgrove. She plays a teen trying to piece her life back together after the tragic death of her mother. Dad (Logue) tries to help by moving them into a kinda-creepy old house where spooky things keep happening – but only when he’s not around. Yeah, you’ve seen it all before, but its still a fun ride and Cosgrove seems to be having a ball.

VICTORI: THE TRUTH JUST CAN’T BE ONE THING
2015; $24.98; UR
A skewed and amusing doc on the career of Victor Victori, who famously painted the official White House Presidential Mural for Richard Nixon, but made most of his living doing pieces for American shopping malls. His real passion, however, is “Multiplism”, the post-modern artform that he invented. We enter his life just as his son, a former financial advisor, quits his job to manage his father’s career, completely unprepared for the art world’s snobby rejection of his father’s work – not because it isn’t worthy, but because he had the audacity to follow his own path!