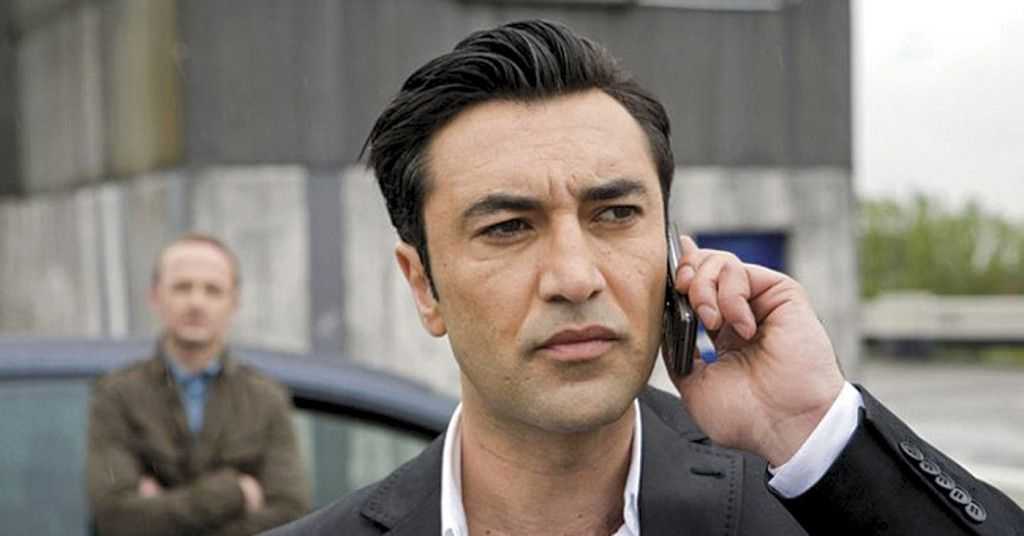 CENK BATU: UNDERCOVER AGENT
2012; $39.98; UR
Many of America’s longest-running police-procedurals – “CSI”, “Law & Order”, etc. – are actually inspired-by/ripped-off-from even longer-running European franchises, such as Germany’s “Tatort”, which has been spawning terrific TV since 1970. “Cenk Batu” is their latest, the ongoing adventures of a brilliant detective/analyst (emotive German actor Mehmet Kurtulus) plying that most deadly of all trades: infiltrating ruthless international crime operations, often posing as a small-time hood looking to advance through the syndicate’s hierarchy by any means necessary. Six big subtitled 1-hour episodes, packed with action, danger, deadly men and even deadlier babes. Addictive as hell.

SALAMANDER
2012; $39.98; UR
This starts out as just another cop show, then cleverly evolves into a dramatic war of political power and its foul, ever-corrupting influence. Filip Peeters (a veteran of “Tatort”) is the Police Inspector puzzling over the theft of 66 carefully selected safe deposit boxes from a Belgium bank. That bank is prepared to go to any lengths necessary to prevent the crime from being reported … or even investigated! And then there’s the matter of those deaths: some by murder, some by suicide, and others who simply vanish, yet they are all somehow connected to those boxes. Four big discs; X-Files brilliant, even with subtitles.

BIG HERO 6
2014; $17.98-39.98; PG
We went to the theater expecting a run-of-the-mill Disney-purchased kid flick, but boy, were we surprised! Go Go, a young robot whiz in near-future San Fransokyo – brilliantly brought to life in 3D CGI – loses his desire to invent after his engineer big brother dies in a fire. All Go Go has left of him is the titular, simpleminded, inflatable robot-nurse. But some dark, shape-shifting evil desires the brother’s legacy, sending Go Go and a bickering troupe of youngsters on a deadly adventure, requiring them to first take the form of Super-Sentai-like techno-heroes. An almost- live-action computer-animated ode to the comicbook adventurer in all of us. Our highest recommendation.

DAY OF THE GUN
2013; $22.98-24.98; UR
A pithy and original little Western set in 1890’s Montana, a time of great conflict due to the invention of barbed wire, which spawned murderous range wars. How original? Well, the female lead – the requisite “widow struggling to save her ranch” – is not played by the usual leggy, frail starlet, but by LaDon Hall, a somewhat matronly woman with a well-worn face. The rest of the cast is similarly nondescript and believable, except for Eric Roberts, who rides through, cashes a check, and moves on to his next cameo.

GOODNIGHT, DARLING
2009; $29.98; UR
Aka, “God Natt, Elskede”, this is a beautifully realized 3-part miniseries from Norway that just blew us away. Veteran actor Gard B. Eidsvold plays an impoverished, world-weary musician (been there) who accidentally captures a murder on film. Having had his fill of tuning people’s pianos just to eat, he blackmails the murderer (dangerous-looking Stig Henrik Hoff from 2011’s “The Thing”), but he’s clearly in waaaay over his head, especially after he tells his leggy, blonde jazz-singer girlfriend about his get-rich scheme. Yes, we’ve been hopeless Nordic crime junkies ever since “Dragon Tatoo.” Join us.

LILIES
2007; $28.98-49.98; UR
While it isn’t our cuppa tea, our wives are hopelessly addicted to this BBC series about three adult, very Catholic sisters trying to hold their family together after WWI. Surprisingly sexy – and funny! – the three are having a rough time of it, what with daddy (Brian “Line of Duty” McCardie) struggling to find his place in the world after the death of his much-younger wife, their brother’s (Daniel “Flyboys” Rigby) war trauma, and their own vastly different goals in life. But through it all statuesque Iris (Catherine Tyldesley, “Coronation Street”), would-be actress May (Leanne Rowe, “Oliver Twist”), and little Olympic-bound Ruby (Kerrie Hayes, “The Mill”) know that they are stronger together than apart. Eight episodes on three discs.

SERANGOON ROAD
2013; $28.98-49.98; UR
Wow! This exotic and unexpected HBO Asia original series is amazing! Set amid the violence of mid-60’s Singapore – where natives rioted over the criminals and foreign capitalists who were plundering their country – we follow the exploits of young widow Joan “Twin Peaks” Chen, who hires Australian Don “Underbelly” Hany, after spending much of his youth in a Singapore prison, to help her keep her late husband’s P.I. business afloat, and maybe solve his murder. Her new partner is truly a piece of work: whether romancing the very married Maeve “Black Wave” Dermody, making deals with local CIA spook Michael “Wonderland” Dorman, or openly baiting a homicidal gang boss – Chin Han from “The Dark Knight” – he gets by on guts and brains … and blood if need be. Highly recommended.

WHIPLASH
2014; $17.98-34.98; R
On the face of it, this is just another “young would-be musician is challenged by a grizzled old teacher” drama, but what makes it special are the amazing people within. The student is played by Miles Teller from “Divergent” (the next Reed Richards in the upcoming Fantastic Four reboot). The ruthless prof is J.K. Simmons, that balding guy from the Farmer’s Insurance commercials – and 150 movies/TV shows since 1986! Watch for the Buddy Rich wall poster that says, “If You Don’t Have Ability, You Wind Up Playing In a Rock Band.” Doesn’t miss a beat.

ISLAND OF THE LIVING DEAD
2007; $11.98-19.98; UR
The late Bruno Mattei was the last of the classic Italian gore-porn directors, having created some 50+ films under various pseudonyms going back to 1970’s “Armida, il dramma di una sposa.” To be brutally honest about it: his flicks stunk – and this comes from a pair of dyed-in-the-wool gore-porn hounds – but they were nonetheless entertaining as only true crap-cinema can be. “Island” was his final film, a particularly odiferous outing starring comely Yvette Yzon, set upon and eaten by a slimy cadre of zombies who seem to delight in seeing how far they can make blood spurt. Verily it is Art. Also available: “Zombies: The Beginning”, his next-to-last film: an “Aliens” ripoff also starring Yzon.

MIDSOMER MURDERS, SET 25
2015; $31.98-59.98; UR
We’ve been happily promoting these visits to the “murder capital of England” – the deceptively peaceful county of Midsomer – for years now, and they just keep getting better. Neil “Life Of Riley” Dudgeon returns as the Detective Chief Inspector, now with a new assistant, who must determine whodunit amid guest stars (and guest corpses) that include Michael Jayston, Sharon Small, Robert Bathurst, Ann Eleonora Jorgenson – and Miss Hayley Mills! Our favorite in this set is “The Christmas Haunting”, with gorgeous Perdita “Kon Tiki” Avery as a small distraction amid the ghost-hunt murder of a dastardly seducer. America has nothing on the telly to compare with this.

MY LITTLE PONY FRIENDSHIP IS MAGIC: ADVENTURES OF THE CUTIE MARK CRUSADERS
2015; $9.98-14.98; UR
No, we’re not “Bronies”; a friend gave us this and said it was her little girl’s favorite series. (The girl is question is about to start college, but being two men of a certain age who write a video column together, we’re hardly in a position to be snarky.) Coming-Of-Age in the enchanted land of Equestria is signified by the appearance of a pony’s Cutie Mark. Representing that entity’s most prominent personality trait, each is different and unique. Here three new friends bond together and go on a crusade to find their cutie marks.