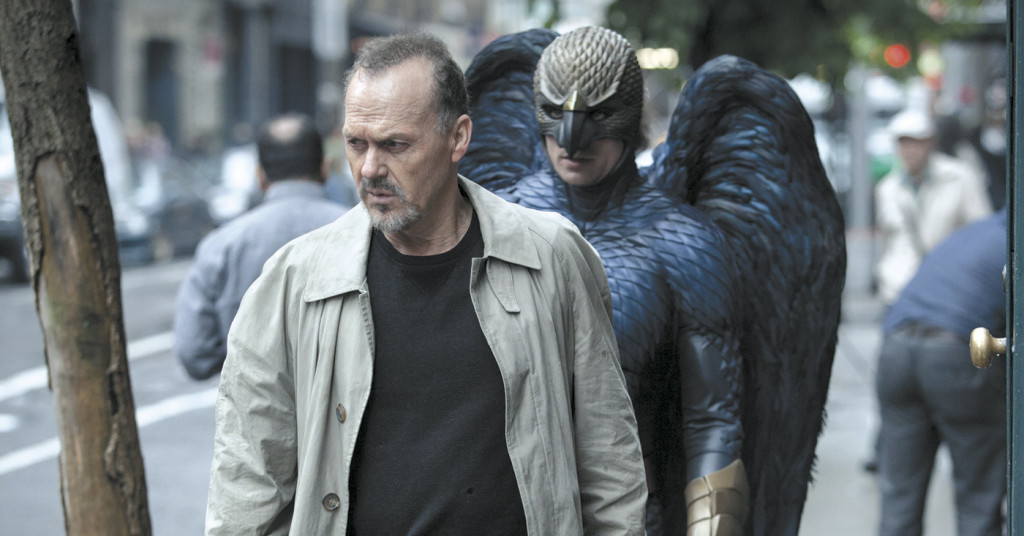 BIRDMAN
2014; $24.98-39.98; R
This Michael Keaton vehicle is flush with Oscar buzz, with the former Batman portrayer playing an actor trying to rebuild his family and career decades after portraying a movie superhero. He’s bet the farm on an original Broadway play, serving as writer, director, star and co-producer along with his bud Zach Galifianakis. Very smart, with hallucinogenic touches of Jean Luc Godard’s fractured New Wave grip on reality, as Keaton winds his way through a spiritual minefield populated by Emma Stone, Naomi Watts, Edward Norton, and Andrea Riseborough. You’ll have this in your head for weeks.

THE THEORY OF EVERYTHING
2014; $19.98-29.98; PG-13
In another Oscar contender, Eddie “Les Miserables” Redmayne is extraordinary as lazy college student Stephen Hawking, who falls in love with Felicity Jones before learning that his body will wither away due to ALS, leaving only his brilliant mind unharmed. Much has been made of Redmayne’s amazing physical transformation as the disease progresses, and it is all true, but Jones’ transformation from college student to wife, mother and full-time caregiver is equally impressive, as is Harry Lloyd’s portrayal of Hawking’s (fictitious) best friend, the man who literally carries him through the film. Simply put: One of the best biodramas, best love stories — hell, best movies! — we’ve ever seen.

DUMB AND DUMBER TO
2014; $17.98-22.98; PG-13
Jim Carrey and Jeff Daniels return under the baton of Peter and Bobby Farrelly to recreate the “magic” of the original film. Unfortunately, old guys acting like brainless assholes isn’t as funny as young guys acting like brainless assholes. It just plain stinks despite help from Rob Riggle, Laurie Holden and a cameo by Bill Murray.

HOZUKI’S COOLHEADEDNESS
2014; $32.98-59.98; UR
Fans of Japanese animation have been howling for this release. Hozuki is a sadistic demon, Deputy Chief to King Enma, Lord of Hell, who uses his fiendish talents to keep a lid on all the demons and lost souls who populate his wretched plane. But he also likes to play with fluffy little bunnies, and his favorite hobby is raising “Goldfish Flowers” (though we still don’t understand exactly what those are). His guiding principle is simple: If any suffering is going to be done, it is not going be done by him. Truly unique, dark, mesmerizing and inventive.

LIFE ITSELF
2014; $20.98-29.99; R
Finally available on video: this wildly entertaining doc on the late film critic and social gadfly, Roger Ebert. An approachable and very friendly soul who truly loved movies — especially those with no seeming social value — he championed and encouraged a generation of otherwise unemployable half-wits to take up the pen and join in the fun — your humble scribes Dave and Bill among them. Packed with stars, friends, and family, Ebert is seen laughing and cutting up – and cleverly, comically cutting down his critics — even as he fights a long and painful battle with the cancer that would take his life. Truly uplifting and fun; don’t miss it.

POWER RANGERS: SUPER SENTAI ZYURANGER: THE COMPLETE SERIES
1992; $39.99-54.98; UR
Frank Zappa famously said, “Art is making something out of nothing and selling it,” and thus did Shuck Levy and Haim Saban launch the Modern Era of Children’s Programming in 1993 by taking this live-action Japanese series (originally, “Kyoryu Sentai Zyuranger”), splicing in English-speaking American actors, and calling it, “The Power Rangers.” Evil sorceress Bandora escapes her 170 million-year captivity on Planet Nemesis, waking the five Zyuranger warriors left on Earth to protect the universe from her evil via their massive mechanical Guardian Beasts. Wonderfully subtitled so you can enjoy all that juicy cultural dissidence as God intended.

ST. VINCENT
2014; $17.98-34.98; PG-13
We believe that Melissa “Mike & Molly” McCarthy is funniest when she tones it down — fuming restraint instead of going postal at a moment’s notice, á la “The Heat.” Here she gets a chance to prove us right as a recently divorced mother opposite worst-babysitter-ever Bill Murray, the crusty old alcoholic war-vet who lives next door. Murray takes the boy along as he visits local bars and strip clubs, often accompanied by pregnant Russian stripper Naomi Watts, and the only thing that keeps McCartney from killing him is the growing bond between Murray and her son. When she finally vents her misdirected anger at teacher Chris O’Dowd, it is all the more hysterical. One great little movie.

THE INTERVIEW
2014; $9.98-19.98; R
If there hadn’t been all that furor over (supposed) North Korean hackers invading Sony’s computers for dissing Kim Jong-un, this movie would have come and gone in a weekend with little fanfare. Instead it became a cause celebre, with James Franco and co-writer/co-director Seth Rogan earning far more notice than the film is worth. The two do a sleazy TV talk show that they learn is a favorite of Jong-un, who invites them to NK for an interview. The CIA convinces them to assassinate the man. The main source of humor is the North Koreans’ blind devotion to such an obvious loser. The same could be said about American audiences and this film.

WORLD MADE STRAIGHT
2014; $9.98-25.98; R
Jeremy “War Horse” Irvine and former child-star Haley Joel “I See Dead People” Osment are young men trapped in the poverty and violence of a small, muddy Appalachian mining town, the scene of a Civil War massacre a century earlier. And it is this massacre, recorded in an old journal, which drives the modern-day conflict, goaded along by the town’s drug-dealing former teacher, Noah “ER” Wyle, and his coked-up girlfriend, Minka “Almost Human” Kelly (so incredibly beautiful that she nearly derails the movie). It’s no “Winter’s Bone,” but we liked it.

Admittedly just a another modern monster movie, one of those “cabin in the woods, full of people who have no business being in the woods” things made watchable by a surprisingly strong cast. The star is supposedly Joey Lauren Adams of “Switched at Birth”, but doe-eyed Elizabeth “Victorious” Gillies quickly walks away with the film, assisted by Keke “Akeela And The Bee” Palmer. Lightweight and breezy horror perfect for a night on the couch; with terrific monster effects, a bit o’ blood, and a smattering of welcome cleavage. Our kinda movie.

Anyone who needs an introduction to this HBO juggernaut of sex, blood, sex, cruelty, sex, power and more sex, courtesy of author George R.R. Martin, needs to visit the Outlet Mall in Simp and buy a life. To be honest, Season 4 caused a rift in the fan-o-sphere, being the most chaste season of the series so far, with the Lannister clan holding fast to the Iron Throne while internal squabbles distract them from armies amassing on all sides. In football they might call this a “rebuilding year”: a chance to move all the game pieces into their proper place for a slam-bang clash to come. And have sex. Can’t forget the sex.

If any movie genre was more ripe for animated skewering than the Gladiator Film, we can’t imagine it. And who better to provide the poking than the Italians? That’s why this harmless kids-tale of ancient Rome is so much fun, with first-time actor John Schwab voicing Timo, an orphan boy adopted by a general. He’s just a laid-back dude with absolutely no interest in blood sports until he meets a comely maid voiced by Laura “Red Band Society” Chiatti. We’ve all been there, man.

This Afrocentric Christian drama, set amid the decadence of Hollywood, isn’t really our cuppa tea, but is earnest and fresh, if very, very soapy. Venessa Simmons from “Guiding Light” plays a wet-behind-the-ears would-be reporter given a plum assignment: expose the excesses and personal failings of a group of rising stars … who just happen to be friends of hers. Mykel Shannon “The Bold and the Beautiful” Jenkins costars.

NO TEARS FOR THE DEAD

A South Korean hitman drama that covers familiar territory but makes it seem fresh and alive. Dong-gun Jang (“The Promise”) stars as a degraded assassin who accidentally kills a young girl. For reasons he can’t understand this event haunts him like nothing else in his sordid life. And when his employers issue a new task – take out the girl’s grieving mother (fragile Min-hee Kim) – his will snaps, sending him on a blood soaked quest to save the woman’s life and maybe redeem his soul.

The great-grandaddy of all Mecha animes returns! Fans of the Tokyo Metropolitan Police Special Vehicle Section will recognize four of these episodes as the finale to the Griffin Labor story arc from the legendary 90’s TV series, with the rest being sidebars tales, some of which loop back into the main storyline, and some starting new arcs that extend forward in time. All were originally released as separate OVAs (uncensored direct-to-video releases), now gathered together in this welcome Blu-Ray release, setting the stage for a new Patlabor movie rumored to be coming out in 2015.

This is something we’d never thought we’d see: an original and entertaining sports movie. Five Canadian highschoolers lose their big hockey game, then drown their sorrows dreaming up impossible, heroic tasks they might perform. One suggests, well, skating to NY via Lake Ontario, a very dangerous and near Herculean task. As they prepare they come to appreciate the true value of home and family, and the lessons they learn from each other when they realize that they are literally placing their lives in each others’ hands. Stars Connor Jessup from “Falling Skies” and beautiful Niamh Wilson (“Saw III”) as the requisite cute girl.

Chris Moore of Project Greenlight dreamed up this competitive reality series for Starz that follows a pair of would-be first-time directors as they struggle to bring their cinematic vision to the screen. Given the same comic script and budget, they have just 10 episodes in which to cast, shoot, edit, market and release their creation; online voting will determine who then wins $250K. Zachary “Mr. Spock” Quinto and Cherami “Not Cool” Leigh are the most recognizable faces in this extremely addictive and unpredictable series.

The original “V/H/S” (2012) rode the wave of episodic found-footage films to a claustrophobic conclusion, one that seemed to mark the welcome end of that vacant genre. This time the filmmakers take aim at a different aspect of popular media culture: America’s addiction to cellphone videos and viral media. A madman in an ice cream truck is being pursued by police in a thrilling death-race while scores of morons try to capture YouTube images up close and personal. But in doing so they are earning a one-way ticket to Hell, and can only watch helplessly as their personal Fitting Death comes calling. Bwahahaaa.