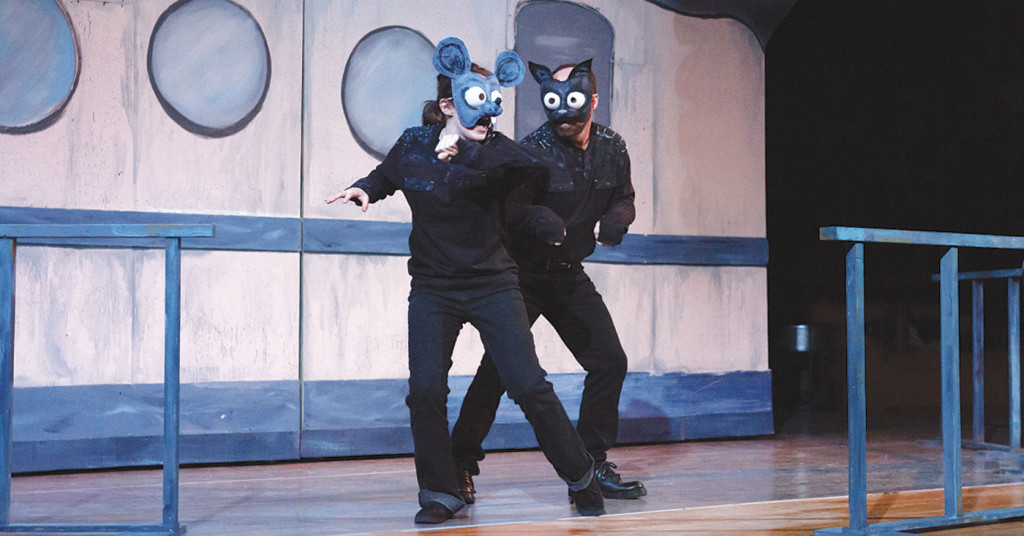 ‘Mr. Burns’
The run-up to the Humana Festival of New American Plays (which kicks off March 4) is always a busy time for local theater companies. Last week, three excellent companies opened productions that continue through this weekend (or beyond).

Theatre [502] is closing its season with an outstanding production of Anne Washburn’s shrewd post-apocalyptic mash-up, “Mr. Burns – a post-electric play.” After a disastrous global epidemic and a subsequent string of nuclear power plant failures, small pockets of human survivors are left huddling around fire barrels in a dark and gridless world, with nothing to bind them together but piecemeal memories of shared stories.

Those shared stories, it turns out, come from popular sources like “The Simpsons” and Gilbert & Sullivan plays. There is no authoritative Homer to recite canonic versions of these stories – like the “Cape Feare” episode of “The Simpsons.” Rather, they’re reconstructed in a collaborative process. And over a period of decades, we see the halting fragments reassembled to become a glorious full-blown piece of operatic theater that serves as a kind of heroic national epic.

As Director Gil Reyes observes in a program note, this production demands a grand space – and the Clifton Center makes for a perfect stating area – especially for the climactic riverboat scenes framed by totemic figures drawn from “The Simpsons.” You pretty much have to see it to believe it (credit also to the technical folks: Karl Anderson, sets; Jessie Alford, lights; Corey Harrison, sound; and Lindsay Chamberlain, whose costume designs are extraordinary).

The acting ensemble (Kyle Ware, Erica McClure, Megan Massie, Zachary Burrell, Megan Caudill, Brian Hinds, Tamara Dearing, Alexandria Sweatt) is superb across the board – and does a fine job of morphing from shell-shocked survivors into a troupe of driven, competitive actors. But Ware is especially effective as the stumbling bard who leads the initial reconstruction of “Cape Feare;” Hinds is a suitably creepy Mr. Burns. Hinds and Dearing have a delicious comic turn as an effete successful couple of in a playlet within a play, and Dearing brings a superb singing voice to some key scenes – in fact, the demands of the musical score are considerable, but the ensemble, supported by a band consisting of Sean Donaldson, Nick Peay, Ben Owens and Heidi Stenson commands it with ease.

One might well ask: “Does the criminal couple offer good material for a musical?”

I guess the answer is, “Why not?” This is no “Sweeney Todd,” but Wildhorn serves up some reasonably good tunes (the score was nominated for a Tony in 2012), and the perplexing celebrity status accorded “public enemies” during the Depression offers plenty of grist for a writer’s pen.

Long before Clyde (Michael McClure) and Bonnie (Madeline Perrone) are implicated in their first murder, we get to know them first as youngsters (admirably played by Roman Tate and Caroline Siegrist) obsessed with escaping poverty and earning fame. Clyde is fascinated by western outlaws. Bonnie wants to grow up and see herself, like Clara Bow, on the cover of a magazine – though she doesn’t dream that the magazine will be “True Detective.”

Menchell’s book gives us just enough populist politics, psychoanalysis, lusty romance and verbal wit to earn Bonnie and Clyde a bit of sympathy. And McClure and Perrone infuse the characters with enough lively charisma to explain how a couple of lowly hoodlums could rise to folk hero status. Theirs may be a doomed and bloody romance, but Bonnie’s naively heartfelt poems and their ongoing argument about who should get top billing offers a disarming lightness.

Adding heft, there are several other strong performances. Jordan Cyphert plays Clyde’s hero-worshipping brother Buck; Sara King is Buck’s long-suffering wife Blanche; Elizabeth Loos is Clyde’s mother Cumie; and Tina Jo Wallace, is Bonnie’s mother Emma. There’s a comical trio of cynical women who don’t mind at all that their own husbands are spending time in stir (Cami Clauser, Jillian Prefach and Kayla Peabody). And the authority of police and religion are portrayed by Edward Miskie, a cop enamored of Bonnie; Paul Kerr as a brutal sheriff, and John Payonk as a fire-and-brimstone preacher.

‘A Kid Like Jake’
At a cocktail party, I’d stay as far away as possible from Alex (Lauren McCombs) and Greg (Michael Mayes), the couple at the heart of Daniel Pearle’s comedy/drama “A Kid Like Jake,” which opened last week at The Bard’s Town Theatre in production with Andy Epstein.

Alex is a woman obsessed with plots and strategies for getting their four-year-old-child Jake into one of New York City’s elite, expensive private schools. Greg is, at least apparently, a mellow type, perfectly happy to murmur supportive thoughts to his angst-ridden spouse. Their efforts are supported by Judy (Laurene Scalf), who runs Jake’s preschool.

Among this trio, at least, there’s a consensus that Jake (who is never seen) is a prodigy. And everything would be simple – but for the fact that Jake has a penchant for what Judy describes as “gender-variant play.” That is, he likes to fantasize about being Cinderella, and when Halloween comes around, he has no interest whatsoever in conventionally boyish costumes. Pirates? Pshaw. To Judy, not only is this perfectly okay, it’s something to be embraced because it might make Jake more appealing to the more progressive schools. But for Alex it’s a crisis.

Again, at a party, I’d stay away from these folks. But this makes for fine theater. And McCombs brings this crisis to vivid life with a shattering performance that culminates in a beautifully wrought epiphany (featuring Erin Jump in an important dual role).

‘A Kid Like Jake’
Through March 1
The Bard’s Town Theatre
1801 Bardstown Road
thebardstowntheatre.org
749-5275