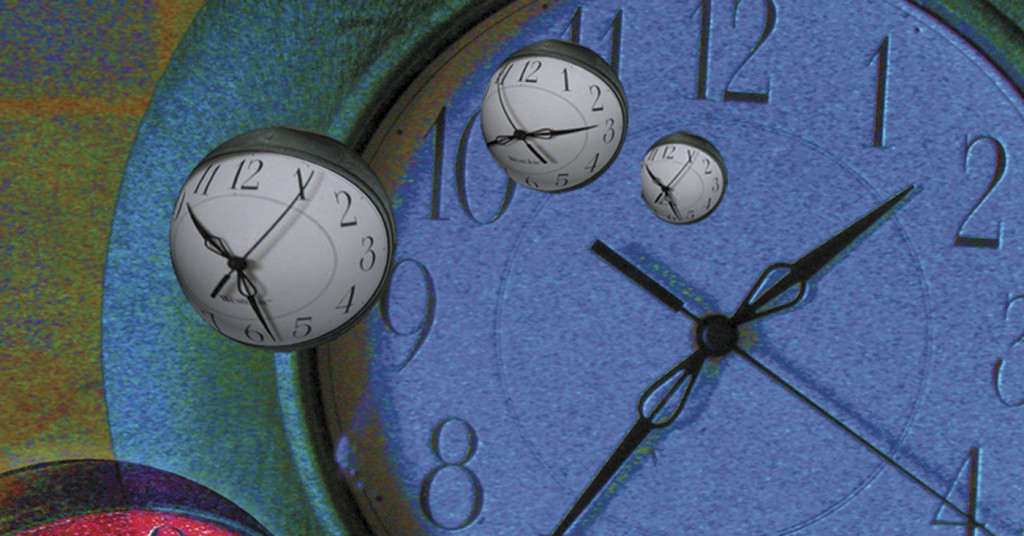 Several years ago, someone tipped me off to Randall Munroe’s webcomic “xkcd,” which describes itself with the tagline, “A webcomic of romance, sarcasm, math and language.” If you’re not already a follower, you can find it at xkcd.com. If you are already a follower (and even if you’re not), you should make your way to the Bard’s Town Theater, where the Louisville Repertory Company is staging a collection of short plays called “All In the Timing” by David Ives.

What Ives and Munroe share in common is a playful delight in logic and language, and a knack for using those tools to turn life’s events into an intellectual carnival funhouse.

The seven plays on this bill deal with love, language, identity and death. The scripts are whip-smart, and director James Tompkins has coached his cast into performances as free, breezy and transparent as a Mozart scherzo.

Two of the plays toy with the passage of time. Like a chessplayer exploring variations in an opening, Ives moves his characters forward until some implacable obstacle appears – then pulls the action back just far enough to try a new strategy. The first play of the evening, “Sure Thing,” finds Bill (Shauvon McGill) approaching Betty (Kate Bringarder) in a café. Time after time his romantic strategies founder on fundamental incompatibilities. When Betty says she’s reading Faulkner, Bill says he’s a Mets fan … DING — Reset! When Bill says he read Faulkner in college, Betty asks where he studied; he says, “Oral Roberts University” … DING — Reset! And so it goes through a zippy comic sequence of cultural (and culinary) references that happily yield a happy ending — before the conceit has time to grow stale.

“Variations on the Death of Trotsky,” with Rich Williams as Trotsky, Elaine Hackett as his much put-upon wife, and Neil Mulac as Ramon Mercader, who assassinated Trotsky, employs the same device, but here the comic elements are more fun, at least for those who enjoy snippets of Communist theory and playful analyses of questions like whether an assassin’s axe was smashed, buried or jammed into the victim’s skull. And in this play, Ives goes deeper, suddenly shifting gears from blithe comedy to more serious reflections, and Williams brings just the right touch of wistful gravitas to the close.

This juxtaposition of blithe comedy with serious intent shows up in a couple of other plays as well. Most of “Universal Language” will bowl audiences over with the sheer virtuosity of the writing — and the amazing performances of Richie Goff as Don and Alyssa Furkin as Dawn (Niel Mulac has a brief, inconsequential cameo). Here, the idea is that Don has invented a new universal language – Unamunda – that will ultimately unite all mankind. Dawn, meanwhile, suffers from a stutter that’s left her isolated from the world. She wants urgently to be among the first to learn the new language or, as Don puts it, to be “di feersta di feerstenn.”

Unamunda, it turns out, is a droll sort of Esperanto where the word for “English” is “Johncleese,” and the sentence, “Excuse me, alas I don’t speak English” translates as “Squeegee, squeegee, alaska iago parladoop Johncleese.” Trust me, after a few minutes of headspinning confusion, Doff’s brilliant performance will have you sold on the idea that this is a plausible language; he even offers a convincing bit of Shakespeare to seal the deal. And when Dawn makes the sweet discovery that in the new language she’s lost her stutter, bliss starts breaking out all over — until a darkly romantic twist seems to threaten the outcome.

“Time Flies” is another brilliant concept with a darkly comic edge. Here, the main characters, Horace (Neil Mulac) and May (Abby Braune) are a couple of love-struck mayflies whose happy existence takes on a sudden urgency when they turn on their TV and learn from David Attenborough what it means to be part of the order Ephemeropter.

Two of the plays are droll fantasies. “The Philadelphia” (with Sean Childress, Dan Shoemaker and Abby Braune) riffs on a notion that could easily have become an episode of “The Twilight Zone.” It proposes that every once in a while, a person suddenly slips into a cultural black hole where, say, New York becomes “Philadelphia” — well, I suppose in the original script it was Philly. In this funny adaptation, the characters abruptly find themselves in a “Louisville,” where no matter what they want, it won’t be available — unless, perhaps they really want a Hot Brown. It’s sheer fun, and the cast has a ball with it.

Likewise, the cast of “Mere Mortals” (Dan Shoemaker as Charlie, Sean Childress as Al and Michael K. Smith Jr. as Joe) has a blast (as does the audience) as a trio of high-rise construction workers whose lunch begins with a squabble about bowling and then turns into a series of revelations in which we learn that none of them are the people they appear to be.

After all the quick-witted fun of the first six plays, the script of the closing segment, “Arabian Nights,” which features Michael K. Smith as a Westerner shopping in an exotic bazaar, Megan Hawley as the shopkeeper and Dzemila Bilanovic as an interpreter with an agenda all her own, is bit of a let-down, but the players give it all they can. So does the technical crew, Olivia Plath (sound and lights), Jennifer Siow (costumes) and Janice Walter (props).