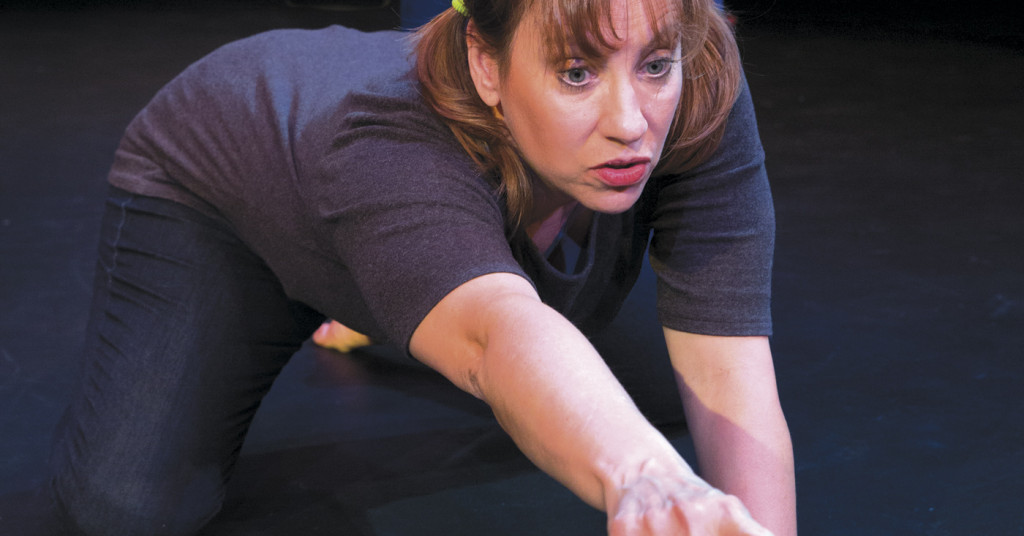 He begins “Everybody’s Protest Novel” (a web search will quickly find the full text) with a relentless literary analysis — then goes on to write about the American protest novel as a genre. Such novels, he writes, rather than a disruptive force for change, have become “an accepted and comforting aspect of the American scene.”

Of such books, he goes, on, “Whatever unsettling questions are raised are evanescent, titillating, remote, for this has nothing to do with us, it is safely ensconced in the social arena, where, indeed, it has nothing to do with anyone, so that finally we receive a very definite thrill of virtue from the fact that we are reading such a book at all.”

In 1960, Harper Lee published “To Kill a Mockingbird.” Two years later the novel was adapted into one of the most honored and iconic films of the last half-century.

For a young Teresa Willis, whose thought-provoking one woman play “Eenie Meanie” opened last week at The Henry Clay Theatre (in a joint production produced by Bunbury Theatre Company and Alchemy Productions), “To Kill a Mockingbird”— book and movie — offered life lessons and metaphors that helped her comprehend the race-related personal and social moral dilemmas of the era in which she, and all Americans, and most especially all Louisvillians, have lived over the last fifty years or so.

Willis’ play, directed by Jennifer Pennington, debuted in 2003 and continues to be updated. It blends comic and dramatic vignettes and bracing reflections that take her from her childhood in Valley Station, through a peripatetic life that ranges from New York to Los Angeles, and sees her through from her childhood in the ’60s through the present. It’s presented on a set scattered with objects of memory, against a multimedia backdrop of recorded sound, video and photos that invoke the times through which Willis’ life passes (sound, video and lighting are credited respectively to Tim Labor; Matthew Mars and Willis; and Alexa Holloway).

We first see Willis, in 1965, at age 5 scooching across the floor to see (and perhaps touch!) the exposed ankle of the first black man she’s ever seen in the flesh, a piano tuner who, after finishing his work, enthralls the youngster — and befuddles her family — with a rendition of “Great Balls of Fire.” We see her as a school girl pondering the question of what it means for a crayon to be “flesh colored.” We see her collecting black dolls so that just in case she ever has a black friend who comes to visit, the friend won’t have to play with white dolls. We see her at a roller rink, spinning back and forth as she recounts the bittersweet story of her encounter with a young black girl who’s visiting from Chicago. And the scenes play on … through high school years that find her being bused to Shawnee (“Jigaboo High”) pursuing loves and a career on a voyage of self-discovery that will take her from coast to coast.

There’s a bold physicality to Willis’ performance. Whether she’s scooching, skating, falling in love, falling into despair or walking through the riotous streets of Los Angeles in 1992, she creates fast-moving, memorable images. But more importantly, there’s a bold candor to her account of a life full of ironies and contradictions. As a young girl, she dreams of being Scout in “To Kill a Mockingbird.” Her empathy is a source of pride, and if her desire to live under the protective shield of her own Boo Radley is fancy, she’s deeply convinced that her father is her personal Atticus Finch.

But life takes her in new directions. Her self-righteous pride turns bitter when African-Americans don’t recognize her virtues and empathy. As he ages, her personal Atticus Finch morphs into something else. Each encounter teaches some new, contradictory lesson. And, Willis is seemingly fearless about showing us the steps of her journey.

As far as I know, James Baldwin never wrote directly on the subject of “To Kill a Mockingbird,” but perhaps it’s not a coincidence that after it was published, he wrote a play, “Blues for Mr. Charlie” (dedicated to the recently assassinated Medgar Evers) that culminates in the trial of a white man for the murder of a black man — a trial that yields a different verdict.

But regardless of what Baldwin might have said about “To Kill a Mockingbird,” “Guess Who’s Coming to Dinner,” “Driving Miss Daisy” — or any of our contemporary slate of “protest movies” that take up the issue of race and see people exiting the multiplex comforted in the knowledge that they’ve seen such a movie at all — in the real world, we are still beset by a system of structural inequality enforced through systematic brutal violence.

Art, any cynic will say, has little power to break that system or stop the violence. But at the very least it can refuse to give sentimental camouflage to an ongoing crime. “Eenie Meanie” may not send you out of the theater with a self-satisfied spring in your step — and that’s a good thing.