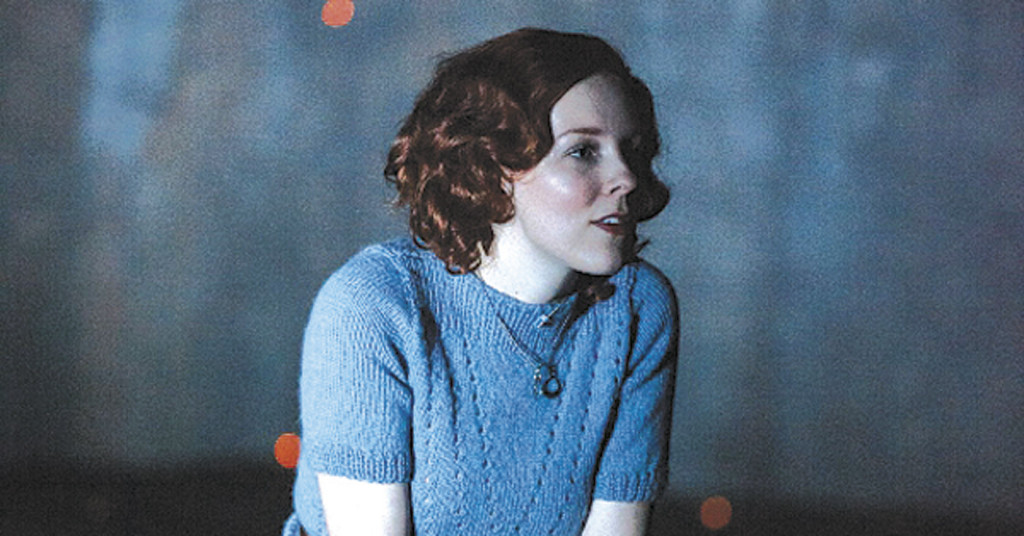 The genius of Naomi Iizuka’s “At the Vanishing Point,” which opened last week as part of the Brown-Forman Series at Actors Theatre of Louisville, is that it delves deeply into the multi-layered mysteries of its central metaphor.

And the beauty of this production is that director Les Waters (who directed an earlier version of the freshly revised play ten years ago, when it was part of the Humana Festival of New American Plays) and his production team have staged a piece of theater that gently probes those mysteries — but never disturbs them.

Step into the Pamela Brown Auditorium, and the first thing you’ll see is scenic designer Annie Smart’s set, a minimalist, starkly effective study in theatrical perspective that uses subtle angles and elevations to create the sense of an enormous sweep of space bounded by features that at first are barely noticeable, but eventually create a deeply specific sense of place. In fact, all the technical details of this production are outstanding. Costume designer Kristopher Castle, lighting designer Matt Frey, sound designer Christian Frederickson and media designer Philip Allgeier have built a world that seems open and simple. Simple, that is, until scenes are punctuated by sudden bursts of lighting and thunder, and until haunting figures (supplied by an ensemble that includes some remarkably disciplined youngsters, including Brandon Greenwald and Ava Johnson in speaking roles) slip furtively across the edge of our vision.

It’s a world where Waters and his cast give life to Iizuka’s richly poetic script with some truly magical acting.

As the play opens, a lanky man strolls on to the stage. “I want to show you something,” he says, then flicks on a projector that displays a blurred black and white photograph, a tangle of cryptic images. The Photographer (Bruce McKenzie, who originated this role a decade ago) talks about the physiology and psychology of vision. Then, in a sprawling, magisterial monologue he discusses music, photography, his work as an optician, his family and his wife. His talk is full of information, wit and the sort of seemingly random tangents and anecdotes that have been part of great storytelling since the time of Homer. And make no mistake: as the Photographer, McKenzie is one great storyteller — a thoughtful, observant man, relaxed, and passionately absorbed in his tales. So natural is his acting that there’s no visible trace of artifice even in a fraught moment when he stands on the precipice of a memory that plunges us into the rest of the play.

Over the next 90 minutes, the Photographer’s tangents and anecdotes — his passing mentions of people like a soldier with astigmatism or a girl in a school play — will ripple across a series of monologues that eddy back and forth through time. And as each tributary monologue joins the main body of the narrative, we’re swept along in a stream of events and connections that bind people and place together in a sweet and bitter flood of shared experience.

For lovers of acting, this production amounts to something of a bravura clinic – and some extraordinary acting comes from folks on the cusp of promising careers. Cameron Benoit and Ali Burch, members of the ATL Apprentice/Intern Company give standout performances. Benoit plays Pete, who lost his job at the old Fischer Meat Packing plant under wonderful circumstances and has gone on to become an expert — if slightly unbalanced — tour guide at the Thomas Edison House. He’s one of those folks who is, as he says, predisposed to be more sensitive to the vibrations in the universe — and Benoit does a masterful job of capturing the fragile, magic energy of this man who hears things the rest of the world can’t. As Nora, an ambitious young student at the Kentucky School for the Blind, Burch gives life to her uncommonly direct style and independent spirit.

Intricate personal and family stories play out in Rashomon-like segments. It’s as if we’ve wandered into a reunion picnic situated somewhere on the banks of the river of time, where people are eager to share their competing versions of their own singular present — and in so doing shape a collective past.

If we think Pete is quirky, his cousin Ronnie (played with a mercurial mix of fire and sentiment by Rebecca Hart) remembers him as an innocent child and wonders how he grew into a man with “about ten lug nuts loose in his head.” And where Nora is caught up in the excitement of an evening when she’ll be walking on stage as Miranda in Mr. William Shakespeare’s “Tempest” and sees the attentions of a young admirer as a pleasant distraction to be overcome, for that young admirer, Martin (played with wistful straight-laced solemnity by Gregory Maupin), knowing Nora is a defining episode in his life. And thanks to composer and cellist Ben Sollee’s musical framing (Sollee also offers up one of the spoken monologues), it’s one of the most turbulent and dramatic moments in the play — a moment that features a couple of fine performances

There is lyricism here, and gutsy poetry as well, as when Frank (Dan Waller) pulls us into the bloody, visceral life of a man whose life’s work is killing hogs; but in Iizuka’s words and Waller’s performance, even the bleak brutality of this world takes on a grand, messy dignity — a dignity that’s only enhanced when Maudie (Wendy Stetson) brings the story full circle in a perfectly pitched mood of irreverence and a sorrowful appreciation of the paradox that the point where things come together is always and forever vanishing.