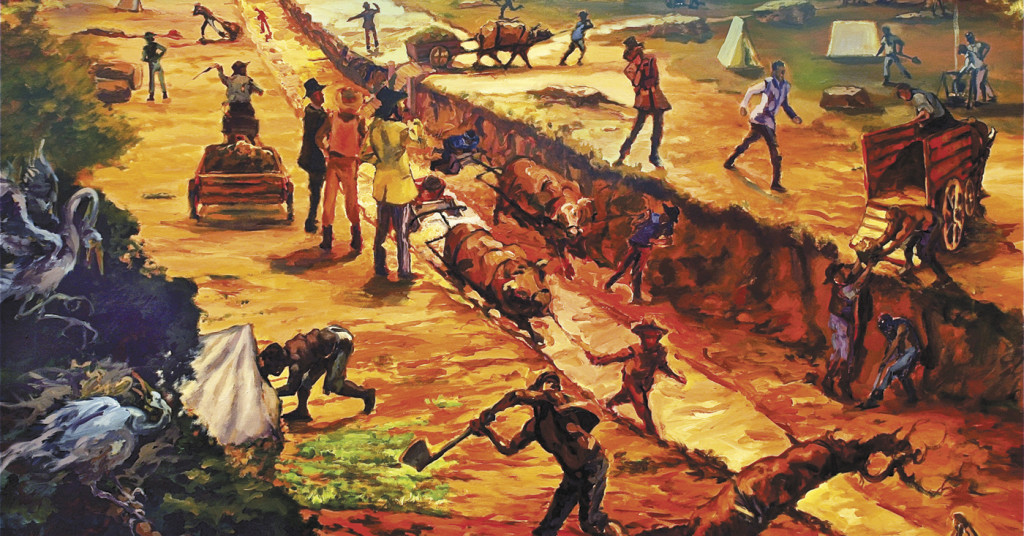 LEO: What sparked you to visualize the stories of the Underground Railroad?
Mark Priest: Listening to my son give a talk on Tubman that I truly enjoyed led me to research her life as well as other freedom seekers like Douglass.

LEO: Your research is extensive, including traveling on some of the escape routes in Maryland, Delaware, New York and Canada. Has the depiction of the people of the UGRR become a mission for you?
MP: Not so much a mission, but accurate truthful knowledge about of the ones I have chosen to paint and draw is important to me as I create narrative series on the subjects.

LEO: Is this the largest display of your UGRR series at one time?
MP: No, this is just a fourth of the work that has been produced. For instance, the Nalle series on display is only half of the work in that series. Though I have created new works in the series, the entire body of work is not on display. Only the second half of the story, which is comprised of some new paintings and drawings in the Nalle Series, is in the current exhibition. I have shown the series from beginning to end to the point that I had completed it in the past in Troy, New York, where the account occurred.

LEO: Where do you plan to go next with the series?
MP: I may continue the Douglass series in painting and prints — only time will tell.

LEO: Explain your artistic process, especially your use of different media for the same scene.
MP: I start with drawings and I do many thumbnail sketches to determine the composition. Next I refine the drawings to the point that they can be used in an exhibit. After the drawing is done I use them for painting compositions. In some cases, the drawing is developed in a print before a painting. My use of compositional studies is important. How I work with the scale of the figures juxtaposed one another is also important. I like to create a tension and crowded space that is familiar to the viewer, one in which he can easily enter visually through size and space, cropping the imagery out of the square of the picture plane allows the viewer to become apart of painting as a bystander as they stand and gaze at the work of art. This is the effect that I aim to create in most of my drawings and paintings. In regards to the use of color, I enjoy the Impressionists painters palette in that it can be utilized to portray powerful emotion, drama and form by using as rich a palette as possible.