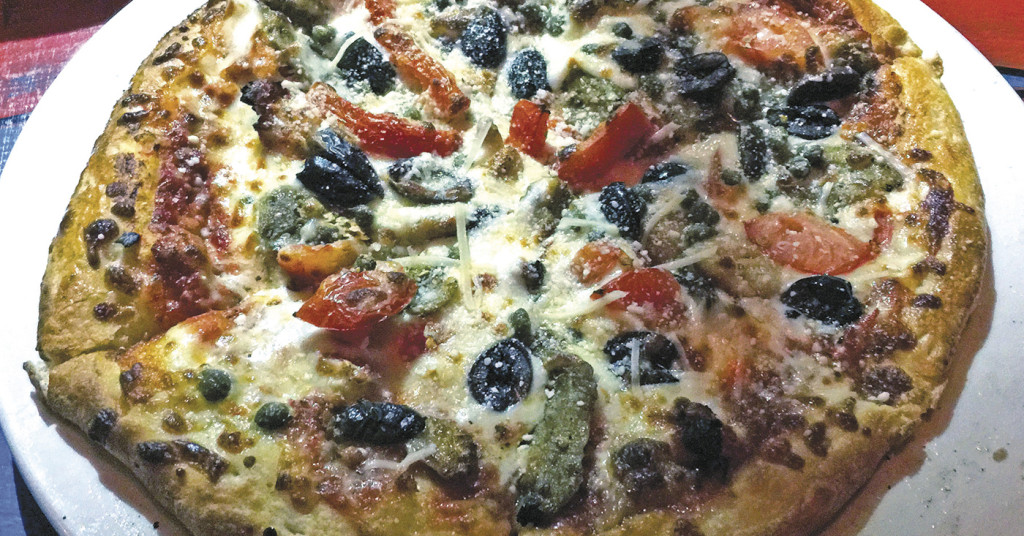 Who’d like to get in on a caper? I’m not talking about a hilariously wacky criminal plot. Even if it were victimless and presumably foolproof, I’m naturally nervous about activities that could land me behind bars. Nor an ancient Celtic jumping and bounding dance, either. I’ll take my exercise in milder doses, thanks!

No, I’m mentally munching into an edible caper, those little green BB-shaped things made from the pickled bud of a Mediterranean lily-like flower, an item that most of us buy in little briny jars from Lotsa Pasta and stash on a refrigerator shelf, never to be seen again.

One of the little fellas almost got away from me the other day, leaping off my pizza at Cafe Lou Lou and making its break for the door. I caught him before he could make a clean escape, though.

Wait! Wait wait wait! Capers? On a pizza? Is Cafe Lou Lou even a pizzeria?

Well, let’s slow down a little here. First, yeah, sure, Cafe Lou Lou has pizza, even if it flies a bit under the radar down at the far end of a long, varied menu, it’s exceptionally good pie, generously portioned on a good, crusty-bread base. I would rank it close to Caffe Classico in the rarefied niche of “great pizza from fine restaurants not primarily known for pizza.”
Now, backing up: Who puts capers on a pizza? Well, Cafe Lou Lou chef and co-owner Clay Wallace does.

And in its setting — Lou Lou’s signature “Mediterranean” pie, which goes for $18.50 large, $12.50 small — this caper makes sense. Its ingredients, a mix of Greek salad and ratatouille on a Euro-bread-style hand-formed round, sing of the Med’s sunny European shores. Sun-dried tomatoes, Kalamata black olives, roasted eggplant and roasted garlic come together with plum tomatoes, funky feta cheese and, yes, a ration of tangy-tart capers with a comforting slather of the traditional marinara and molten mozz’.

That’s my kind of pizza. If it’s not your kind of pizza, you can amuse yourself with any of a dozen more specialty pies, all at the same price, ranging in style from an avocado-topped California pizza to smoked salmon and goat cheese (and capers, too!) and even, get ready for it, a Hot Brown pizza, melding old-school Louisville and la familia Italia.

You can also choose your own favorite toppings for a custom pie, opening up an almost infinite list of possibilities. (Interestingly, capers are not included on the “build your own” list, but I’m pretty sure they’d throw some on if you ask politely.)
Cafe Lou Lou has been around long enough now to rank as a landmark, and its popularity remains undiminished since Wallace returned home from New Orleans and, joined by his mom, Helen Wallace, opened the original Cafe Lou Lou on Frankfort Avenue in Clifton in 2004.

Three years later they moved to the current St. Matthews location (literally “right across the street from where the old Sears store used to be”), bringing along the fun, funky art and the artfully bright red, blue and yellow tables. (A second location opened about a year after that at the Highlands’ Douglass Loop.)

The menu has evolved a bit, but it sticks to its mix of New Orleans Creole and Cajun flavors with the Mediterranean delights of Italy and Greece.

We settled in with our friends Bill and Margaret one recent evening, and immediately headed for the beer list, another realm in which Cafe Lou Lou shines.

Then we got serious about eating. Spinach and tomato lavash ($8), an appetizer with healthy spinach and tomatoes spread on cracker-crunchy Persian flatbread and baked with a blanket of mozzarella and Parmesan, resembled a crunchy, delicious mini-pizza.

Blue cheese polenta ($9), a longtime favorite, was a little less satisfying this time. Mild, dense polenta carried only a hint of blue-cheese flavor. It was loaded with barely grilled asparagus, portobello and onion slices, and roasted red-pepper sauce. Good, but it had a little too much going on.

Lou Lou’s calzones are famed for their girth, but Margaret thought her $11 veggie model’s bread-to-stuffing ratio was cranked way over on the “bread” end of the dial. Bill seemed very happy with a bacon-garnished iceberg wedge ($7 small, $9.50 large) and some kind of corkscrew pasta with crawfish.

The creamy, cheesy linguine carbonara ($12 small) tasted fine, in a gluttonish sort of way. So much cream! So much cheese! So much fatty bacon! Yeah, I realize I’m saying that as if it were a bad thing, but do count those calories.

Pro tip: When you go to Cafe Lou Lou, save room for dessert: Marsh Lynch, also known for our popular Industry Standard column, is Lou Lou’s pastry chef, and she is one fine pastry chef indeed. Her bread pudding ($6.50), fashioned from tender brioche with caramel and fine bourbon, was a real treat.