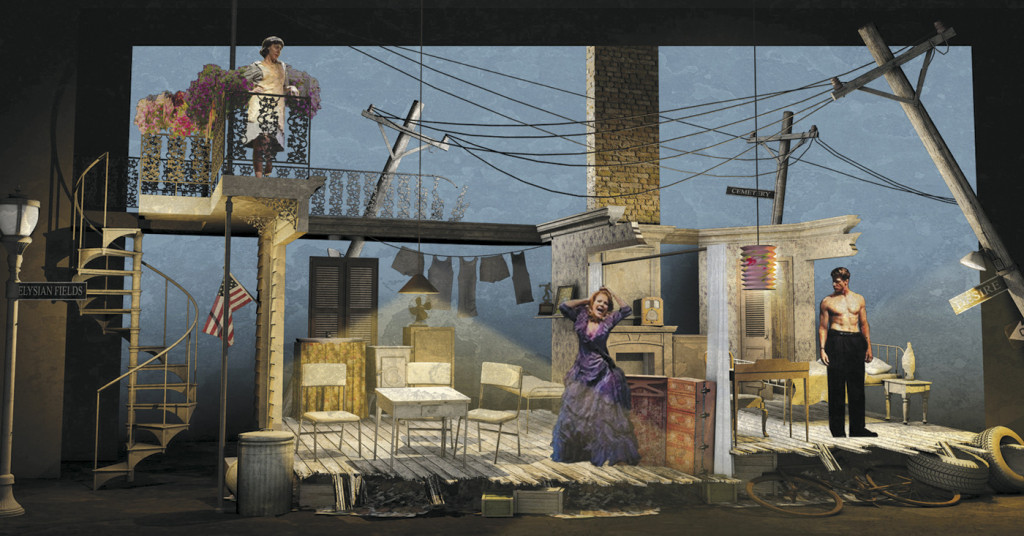 Andre Previn’s opera “A Streetcar Named Desire,” based on the Pulitzer Prize winning play by Tennessee Williams, opened in San Francisco in 1998 on a big stage, with big stars and a big orchestra — and went nowhere.

Previn’s opera called for an 80-piece orchestra to help the singers fill a 3,000-seat theater with sound. But all that was too big for the tale, according to Jose Maria Condemi, who directs a smaller scale “reduced orchestration” version of Previn’s opera to be unveiled by Kentucky Opera in performances Friday and Sunday in the 1,400-seat Brown Theater.

Generally, when one hears the words “reduced orchestration,” it’s as a euphemism that means the production is saving money by employing fewer musicians. That’s no doubt part of the equation – but in this case, a smaller sound seems more appropriate for the opera. And might help it succeed, as the original did not.

“The piece is a chamber story,” explains Condemi. “There are only six characters, and just three main characters. It takes place in a small apartment. So it is a very domestic, claustrophobic world.”

It’s into that closely crowded world that Blanche arrives uninvited to stay with Stella and Stanley — and a slew of emotions are unleashed in a two-room melting pot in a steamy New Orleans neighborhood.

On Broadway, the stars were Jessica Tandy, Marlon Brando, Kim Hunter and Karl Malden, with Vivien Leigh, from the London version, taking Tandy’s place as Stella in the 1952 movie directed by Elia Kazan.

In San Francisco, the opera’s stars included Renee Fleming and Elizabeth Futral, not to mention, Previn, himself. Now 85, Previn towered among the foremost conductors and recording stars of the 20th Century. He was also a concert pianist and composer. He was a musical TV host and won four Oscars for movie orchestrations of “Gigi, “Porgy and Bess,” “Irma la Douce” and “My Fair Lady.”

But Condemi says Previn’s “Streetcar” didn’t catch on and soon faded from the play list. Then for a time the piece was produced with the orchestra on stage: “The performers in costume, telling the story with minimal props, and few chairs. Like that.”

The current version gets back to a fully staged opera, though now sized for regional theaters. Condemi says Previn, himself, approved the slimming of the orchestration. The revival is a partnership of San Francisco Opera’s Merola Opera Program, Kentucky Opera and Opera Santa Barbara (California). After performances here, “Streetcar” will be produced in Santa Barbara in April.

“It is interesting with a piece like ‘Streetcar,’” says Condemi. “Everybody knows about it. You’ve seen the play. Or the movie. The play was on Broadway again just two years ago. It’s part of the American mythology. But, at the same time, the opera is a different animal, just by virtue of being an opera. In many cases the music comments on the action. Punctuates it.”

Mixing music into the dialogue is tricky. It’s one thing in Italian, say, but this opera is English. Generally, this listener would prefer the singers simply say what they need to and then sing songs.

It’s tricky for the performers, as well, says Anya Matanovic, who sings Stella. “Finding naturalism is tough because we’re singing things at a different pace than we would be speaking them,” says Matanovic. “So we’re trying to create this world of theater, with the challenge of doing it in a different tempo.”

Matanovic arrives with an impressive resume of traditional operatic roles. But Stella’s “Streetcar” is a step away. “I wanted something not just musically different, but dramatically different, because a lot of the opera stories are a little thin on plot and character.”

And she wished to find her character on her own.

“I had, of course, read the play and seen it years ago,” says Matanovic. “But in preparation these last few months, I actually chose not to watch the movie. I didn’t want to be stuck doing something that was the expectation of other people. So I may be a little different Stella than people are used to.”

On the other hand, baritone Wes Mason may be a familiar Stanley Kowalski. At a recent “Lunch and Listen” program on WUOL-90.5 FM, Mason shook up the audience, coming across crass and growling. Brooding like Brando. A seething force.

“Wait till you see him on stage,” promises Condemi. “In fact, we’ve been working to get Wes to pull it back a little. Keep it under the lid, so when it comes out it is really all there in the moment.”

Then there’s Blanche, sung by Maria Kanyova. The tragic catalyst of a story that cannot end happily.

“This is all tied up with the history of the Dubois family, and the family is tied up with the history of the South,” says Condemi. “We know Stella and Blanche grew up in a privileged family. But things came unhinged. Stella left the house when she was young and hasn’t had much contact with Blanche. She moved to New Orleans and embraces the diversity in marrying a Polish immigrant, who is as different as he can be from the men she grew up with. She’s broken away from her past and enjoys her life very much.

“Where Blanche is stuck in the past,” Condemi continues. “She’s older and more attuned to the values of the Old South. Clings to it, denies it has gone away. But then life puts her in a corner, no family left, no money left, and this huge load of secrets.”

And one day Blanche shows up on a streetcar named Desire, crashing into Stanley and Stella’s life. One hears the discord of that from the start in the music. Jazz discords from the pen of Andre Previn. “Streetcar” is not a jazz opera, but that’s its musical edge. Life played out on the “black keys.”

“This is a challenging piece,” Condemi says, leveling about what the audience will hear when the curtain comes up. “It is long,” he says. “It’s contemporary music. It takes some time to get used to it. It is actually very tuneful, very accessible. But not like an aria by Verdi or Puccini. It is a different way of writing.”