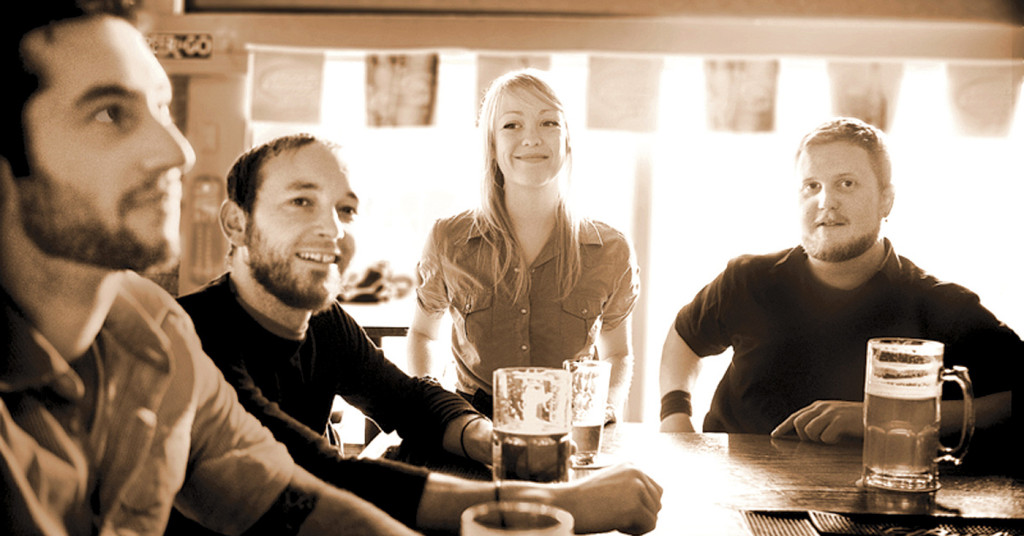 Murder By Death has never been afraid to throw a curveball. That lies in how they’re naturally built: their ominous gothic-folk manages to sound both rooted and futuristic, while their lyrics seem like things that Cormac McCarthy characters would take turns singing around the fire at the annual meet and greet. But it also has to do with how they perceive aging as a band: They would rather give you something weird and challenging than the same stuff twice. Being safe and graceful is the boring route — and a surefire way to fade away. So, that leaves them with the option of creating something thick and layered. Something that rocks their own boat. Something that just kind of says screw it and free falls. And, to my understanding, that’s kind of how the last 15 years juxtapose “Big Dark Love,” Murder By Death’s seventh studio album and maybe their most ambitious to date. It dives deeper down the strange well that ambient music can be and, because of that, it does come off as a bit trendy, but, damn, those creepy ’70s keyboards play well with Adam Turla’s emotionally-charged grizzled voice. In a way, it’s reminiscent of Dylan. (Go ahead, let out your sigh, but stay with me here.)

Every few albums, Dylan has dramatically changed his sound and, without that, we still wouldn’t be discussing him. If he would have essentially made “Freewheeling” a dozen times, we would have stopped caring. Sure, we wouldn’t be making fun of — or coming to the defense of — his material in the ‘80s, but taking the harder road on purpose certainly has value. And that’s “Big Dark Love.” Some people will like it, others won’t. But, that’s how the evolution of music works, I guess.
We caught up with Turla, who relocated to Louisville last summer, to talk about “Big Dark Love.”

On how this record was made differently.
The thing that we did differently for this record is that there are a couple songs that we just wanted to be a little more spare, a little more orchestral. So, we would go in [to the studio] and knock out a vocal and a guitar take and then we would start layering. And we would add this and then pull that. We experimented with a lot of different ways to approach the songs, which I thought was a cool way to approach it, rather than just having everybody show up and write it as if it was a rock song. I think that helped me find the result I was looking for, for certain tracks.

On why this record is more ambient and dreamy than usual.
I knew that I didn’t just want to do a rock record, so the ambient stuff just kind of came out a little more. There’s a little bit more of a psychedelic thing happening than we usually have. It almost has even a slight trip-hop feel. “Big Dark Love” — the title track — is more slinky and beat driven than a lot of our other stuff. Part of that was something that we found to be exciting and interesting. I know one thing that happened in the studio, that we really hadn’t intended, is that we found ourselves using a lot more old ‘70s keyboards than we planned. That was something where, we knew we wanted keyboard, but when it actually came down to getting the sound, we found ourselves really gravitating toward these really ethereal, strange-sounding keyboards and that was a fun surprise. You think you have these songs totally done, and then, suddenly, you’re like, ‘wow, this tone is crazy, I didn’t expect this sound in the song.’ And that was cool; to surprise yourself.

On why this record is a curveball.
It’s weird. And we have seven albums. And we’re not interested in repeating ourselves anymore than we have to. I think the stuff that’s a little harder to get, people will dig in and enjoy it more later. I like things that are sort of surprising and I’m not really interested in stuff that grabs you the first time. I like stuff that takes a little digging; stuff that’s maybe a little confusing. I find that to be more fulfilling in the long run. I’m excited for people to hear the basic song, then to hear what we did to screw up the song or make it weird.

On how writing songs is different for him these days.
We started this band when we were 18/19 years old. Our first record came out when I was 20. Our second record, I had just turned 21. I had some big ideas about what I was trying to do, but I had no idea people would still be listening to those records. I had no idea that I would still be playing music. I never really thought about it. The thing I think about the most when I think of now and then, is that you have to acknowledge the past as well as the future when it comes to writing. And you have to say, ‘Ok, well, I wrote this song already, [do I need] another song that sounds just like it?’