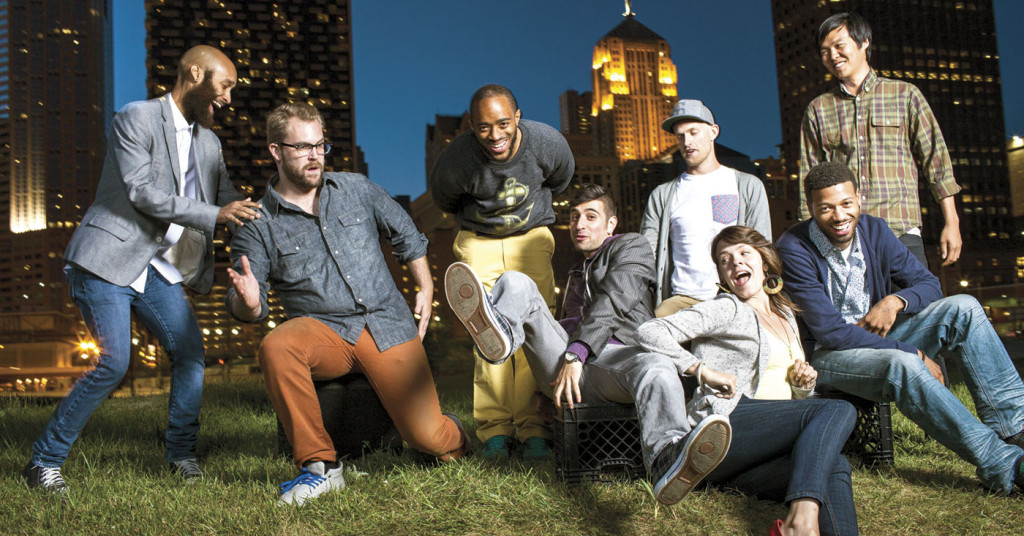 There is something incredibly celebratory about the music of Chicago’s Sidewalk Chalk. They function as a unit, as one cohesive whole that work together or not at all. That manifests itself into their sound, a brand of socially-conscious hip-hop fused with numerous other genres, cleverly rhymed and assembled with great care. An octet, Sidewalk Chalk is comprised of an emcee, a female vocalist, keyboards, bass, drums, a horn section and even a tap dancer.

It’s hard to define your own music, but keyboardist Charlie Cofeen is willing to try: “We describe our music as the evolution of hip-hop, soul and jazz. That means that we acknowledge that what we do is, and always will be, tied to music of the past, but that we are not bound by what hip-hop or jazz is ‘supposed’ to sound like.”

Trumpeter Sam “Trump” Harris adds, “As far as the evolution of our band musically, I would say that we’ve been expanding through the course of our three albums with finding progressive sounds and blending different texture combinations of our many elements. I feel that our progression is due to our diligence with constantly creating new material to share with our audience. From the beginning, it’s always been a natural process.”

Sidewalk Chalk thrives just as much live as they do in the studio — and it shows.

“There is no allegiance to the recordings,” trombone player David Ben-Porat says. “Sometimes we play the songs exactly like the record, and sometimes one of us tries something a little different and the rest roll with it. If that change sounds really awesome, that might be the new approach for that song for the next couple of shows. It keeps us on our toes and interested.”

Ben-Porat adds, “I would venture to say that our audience enjoys the surprise. It’s the essence of the moment that sparks us as humans. We thrive on playing live, so you might get the song how it was before, or it might be different. Either way, it’s heartfelt, and that’s what matters.”

This high energy in a live setting and their increased touring schedule resulted in their newest album being comprised entirely of live sets.

“‘Shoulder Season’ is the next logical step for us,” Sisney explains. “We spent more time on the road last year than any year before and this album reflects that. It’s a live album of all new songs, written on the road and recorded at some of our favorite cities across the country. Along with the CD is a full-length documentary showing our process and a look at our lives individually. The name is borrowed from the travel industry and describes the period between high and low season.”

Sidewalk Chalk has spent a lot of time in Louisville, especially recently, but they didn’t always have a strong presence here. It was something, like their sound, that grew through hard work and the ability to figure out how the puzzle fits together.

“It took a long time for Louisville to warm up to us,” Cofeen says. “For a while, we couldn’t find the right venue, right part of town, the right night to play. We were about to take Louisville off the list for a while, but then we played Haymarket and the city showed its true colors. Now, this is one of our favorite places to play. There’s a special energy here, where people are at the show both to listen and have a kick-ass time. There are a handful of fans that have been with us from the beginning in this city, and we can’t thank them enough for helping us grow here.”