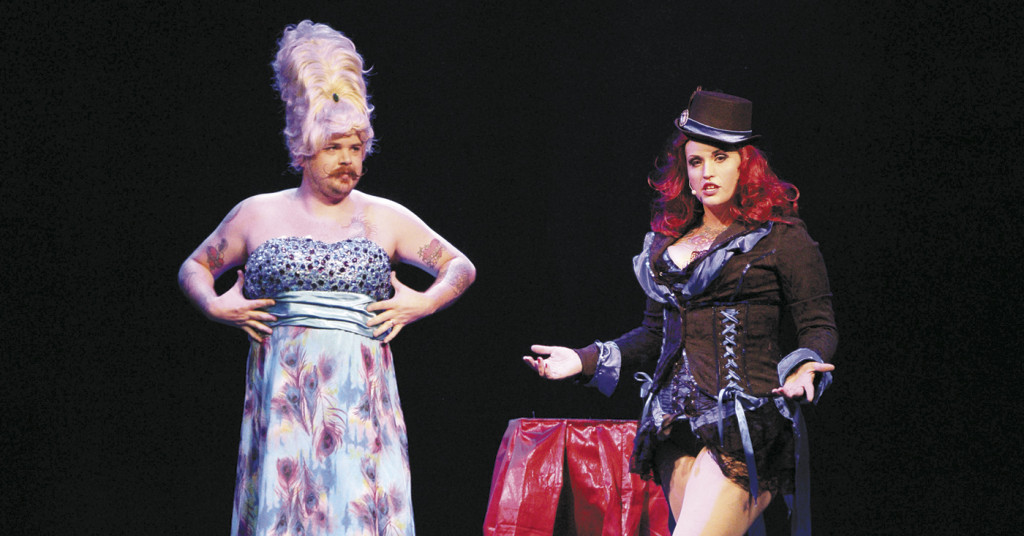 Inside The Art Sanctuary, the Va Va Vixens are hard at work rehearsing for their sixth annual Valentine show, “Va Va Valentine: A Faerie’s Tale.” The air is charged, electric with the spark of excitement and nerves, seeing as the show is opening in a mere five days.

Every year, we attempt to make it bigger, better and more hilarious … and mission accomplished!” Vixens manager/producer and president of Art Sanctuary Lisa Frye tells me, a few days before the rehearsal. “This show is quite a spectacle; we have more performers and more amazing costumes than ever. This way, we were able to capture all of our favorite fairy tales and bring them to life, Vixen style!”

Onstage is one of the final run throughs before opening night, and Lee Ann Cooper and Deanna Calvert who play Mother Goose and Fairy Godmother, respectively, are running through their lines. Offstage, everyone is frantically buzzing around the room doing last minute costume fittings, quick changes, solo rehearsals, maintaining props and countless other minute tasks that are required to make a show of the Vixens’ class and quality happen so consistently.

Frye watches on, staying mostly on her feet so her attention can easily be diverted to where it needs to be around the room, depending on what issue may arise. She praises the performers with her special brand of interjectory compliments: “It looks so ridiculous!” or “That’s something special” and “the cutest Snow White ever.” She gives the Vixens notes and direction like a genteel football coach in a half-time locker room.

“This show has been a bear,” she tells me. “There were more ideas on the table than we have ever had for any show in the past. Everyone was just so excited about the theme. It is definitely the largest and most technical show that we have ever created. Because of this, some performers have been rehearsing four to five nights a week for months.”

All of those ideas and all of that rehearsal brought “Va Va Valentine: A Faerie’s Tale” to life. It’s a whimsical, sexy, comical farce with the innocent, mystical bedtime stories of our youth at the heart of the show. As is the Vixens’ way, they aren’t trying skewer them, but rather offer a less than subtle nod to the characters and stories that meant so much to us then, and are still a part of us as adults.

This show has been a long time in the making; it’s a theme they had kicked around for years, letting it marinate on the table with lots of unused show ideas (including a U.S.O. show, and “Alice in Vunderlund,” a Vixens retelling of Alice’s “true” story in Wonderland). “We have had a long list of “Va Va” themes since the beginning,” Frye says. “This is one that we have waited to do for years, so that we could actually do it right. The costumes are stunning! The numbers are mind blowing!”

Some of the mind-blowing numbers include a spider web dancing sequence in “Little Miss Muffet,” a hilarious “Emperor’s New Clothes” and a comically dark “Little Red Riding Hood.”

If you go, you should know that a Va Va Vixens performance is a rich experience: There’s music, comedy, acrobatics and aerials, but that’s just onstage. The atmosphere in the whole venue takes you back to a roaring ‘20s speakeasy with a kissing booth, cigar girls and waitresses all decked out in their sexy, retro outfits. Walking through the door feels like you’re stepping back in time to a bygone era.

Va Va Valentine is generally the Vixens biggest show annually, but they try to do two others a year because each show takes nearly four months to bring to the stage. In the meantime, the Vixens are also putting on smaller performances for corporate and private events all over town. Everyone involved with the Vixens is actively involved with the local art scene, and it would be impossible to explain how essential the troupe’s contribution to our city’s cultural lexicon has been over the years. One thing that would be hard to overstate, is their contribution to each other’s lives.

“I love everything about Va Va Vixens,” Frye gushes. “We are a giant family and have been to hell and back with one another. I wouldn’t trade any part of it! I am constantly humbled by their creativity, passion, strength and power, their versatility and adaptability. They are all amazing human beings and I am so proud to be a part of this group.”