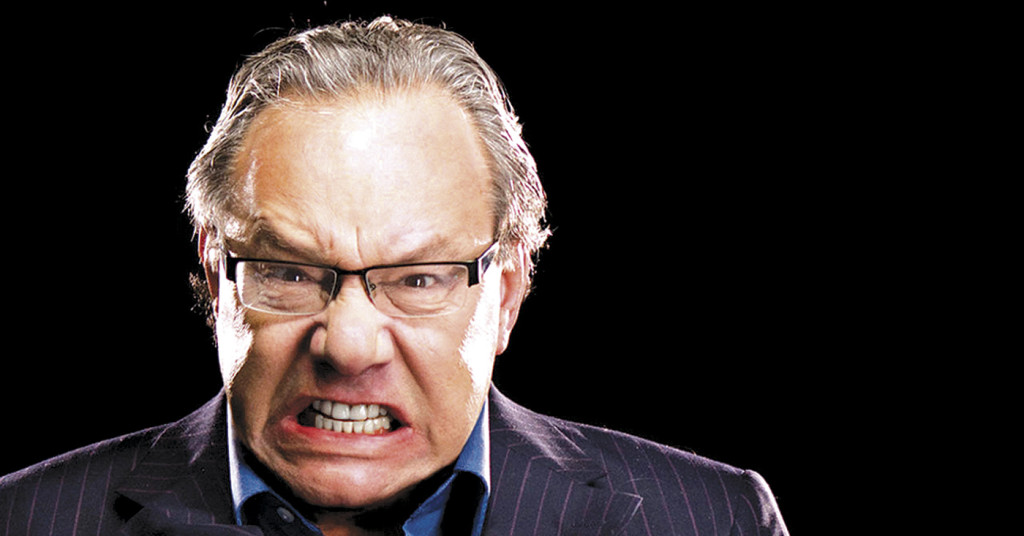 Lewis Black is mad. Stark raving mad all of the time. At least that’s the Lewis Black we’ve seen on TV for the last two decades. His animated hands, his frustrated yell and raspy irritated voice has led him to being one of the most recognizable faces in comedy … and one of the most outspoken critics of modern politics.

Black started his career as a Yale-educated playwright working in Off-Broadway theaters that barely even had seats. He began doing stand-up in his mid-30s when theater proved it wasn’t nearly as lucrative as he imagined it would when he was a young man. Since turning his attention to stand-up, he has been on TV, in movies and consistently on the road, year in and year out, playing stages all over the country. This weekend he will be performing at the Louisville Palace Theater. He took some time to talk with LEO about what has been angering him lately.

LEO: You seem to have made it through town quite a bit over the past few years.
Lewis Black: Yes. You all have great food. And what’s that theater? The Humana Festival.

LEO: Actors Theatre.
LB: Yes, yes. That is a great theater. They’ve never done any of my work, but my friends have had some of their work done there. It truly is a great thing for a city to have.

LEO: What drove you to the political side of comedy?
LB: Well, it started early on, but originally it was a much smaller portion of my set. But I was born and raised around Washington, and there was always something that bugged me about was going on. And I’m funnier when I’m angry, so those guys just became the focal point for my anger. I still try not to make it more than one-third, sometimes half of the set, because these assholes in Washington don’t deserve that much time.

LEO: Is it harder doing political humor because you have a shorter shelf life with the material?
LB: They really don’t because these guys keep coming back. Cheney keeps coming back. Idiots don’t have a shelf life; they never leave the shelf. Sometimes the challenge is that you feel like you’re repeating yourself and telling the same joke over and over. It just happens to be about someone different this time, like this bunch of idiots that are planning to run for president. I want to know what “friend” turned to Rick Perry and told him he should go for it?

LEO: Who do you think is going to run for president in 2016?
LB: I don’t care at this point. I would like us to actually focus on things that need to be done now because what we’re doing is focusing on who’s going to run; we’re missing the fact that nothing is getting done. Why these people don’t have to get anything done is beyond belief to me. And then they both point to the other side. I don’t care, the blame game has to stop.

They’re already lobbying for position in 2016 today by the votes they’re having. Fuck you! Do the work you were supposed to do. So you’re going to vote for the 56th time to repeal National Health Care? Really? You’re going to do it for the 56th time? We know it’s not going to pass at point … don’t you get it? The problem is the way it’s written, so sit down and rewrite it. Do the work that has to get done. It doesn’t help for you to get up and say this crap anymore. You tried. It didn’t work. It’s called, “tough shit.”

LEO: Can we cross our fingers and hope you get elected
and fix it?
LB: I’m not going to fix it. I couldn’t be surrounded by those people.

LEO: Did you go see “American Sniper”?
LB: I did. I thought it was slow. I mean it. I was kind of stunned. I thought Bradley did a great job – but I thought “Hurt Locker” gave more of a sense of it. But it’s always hard for me to watch those films because I did three U.S.O. tours, and it just brings it all back and what we put our soldiers through.

LEO: It is shocking how little after care we offer soldiers these days.
LB: Oh, it’s disgusting. What they have done is shameful … all of them … to have allowed this to occur. These guys are fighting an uphill battle every day to get the proper care. Really? Now they want us to raise the money on our own to make sure these guys are taken care of, and I’m happy to do it – but that is fucking federal government’s responsibility to care for the men that defended this country.