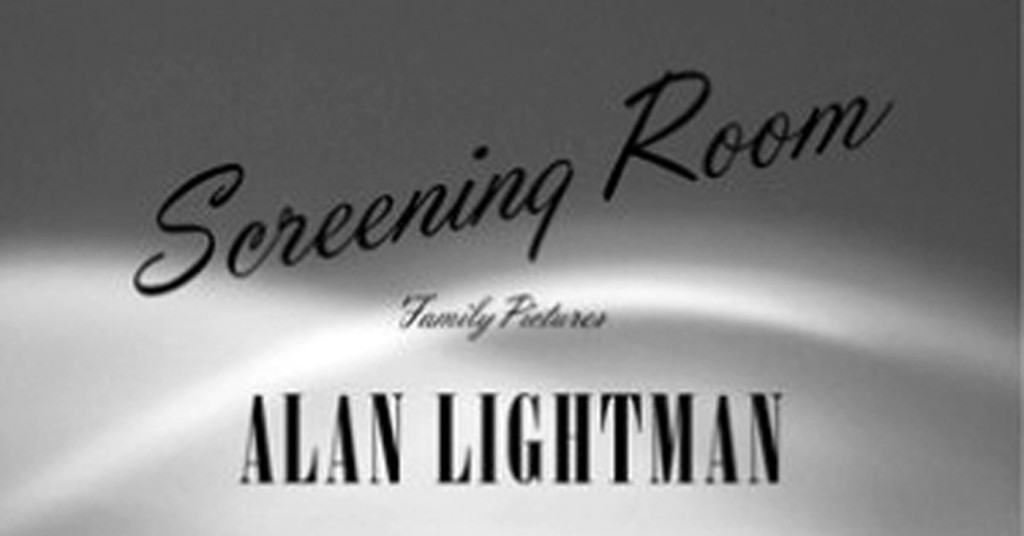 Alan Lightman was trained as a physicist and became the first person to hold a dual faculty appointment in science and the humanities at MIT. He can write nonfiction about the cosmological and the very personal, and has joined the two in fiction with bestselling results (“Einstein’s Dreams”).

Carmichael’s Bookstore, with the Kentucky Science Center and Bristol Bar & Grille will host Lightman on Monday night at the Bristol on Bardstown Road. Lightman will speak with Andrew Spence from the Kentucky Science Center about the newly published “Screening Room: Family Pictures.” This is a chronicle of Lightman’s family, which rose to prominence in Memphis in spite of anti-Semitism and with the help of the film industry. The Lightmans had a thriving business as theater owners — and were guided and manhandled through it all by the unique M.A. Lightman, the grandfather of the author.

The book looks straight into the face of many forms of intolerance. Generations clash, whites hold down blacks, and as Alan Lightman shared in a recent phone conversation with LEO, “In the time I was growing up, every Southerner felt an inferiority complex — or at least felt that the Northerners looked down on them.”

The ways in which various forces might bring about change are a beautifully handled subtext in the book. As a youngster, the author joins one of his brothers in fashioning an imaginary creature in the style of Judaic mythology to deal with the impacts of familial tensions. Elvis and Martin Luther King Jr. are recalled in their appearances in the lives of the Lightmans through the 1950s and 1960s — along with a parade of local characters who made progress in and for Memphis.

LEO: “Screening Room” is quite a change from your novels, but the time was right, wasn’t it?
Alan Lightman: I’d been intending to write about Memphis for a long time, and actually, I finished a first draft of this book about five years ago. I decided not to publish it while my father was alive, as it’d be upsetting to him. I waited until he passed away, and spent another year revising it.

LEO: Did you know how much you wanted to fictionalize in this book?
AL: I wanted the book to have the feeling of a literary work — of a storytelling. If you want to tell a good story, you’ve got to fictionalize a little bit, because you just don’t have all of the facts from real life to create scenes and dialogue. What I try to do is, every character who is a real character — and all of the primary characters are real characters — when I fictionalize at what I call “embroidering,” I always try to stay true to their character. I did not put in any dialogue that I thought they would not have said. I did not put them in any scenes that I thought they would not have participated in. I tried to present true pictures of all the main characters. There were one or two characters that were totally made up, and I say that in the notes of the book.

LEO: The “phasma” — the invented spirit — did you believe you’d be carrying that notion around with you to use in a book someday?
AL: I had sort of an unconscious idea, because my grandfather M.A. Lightman was a figure larger than life. He was a tremendous force in our family, and a force in the world. For me and for other people, he took on almost mythic proportions. The idea of creating a mythical apparition or a magical being that was attached to him sort-of expressed the feelings I had about him. So as a literary device it fit perfectly with our emotional and psychological picture of him.

LEO: What do you think of memoirs as a way of bringing about social healing and common good when we’re recounting lessons learned but also harsher things that are still with us.
AL: History — and especially personal history — is part of what makes life. It enriches us. It affects our understanding of the world and who we are and where we come from. So it’s important to remember our past. I do think that memoirs are a form of healing sometimes even more than academic histories of a time and a place — because the memoir, by definition, is very personal — especially if the memoirist has gone through a transformation of some kind, and has a broader perspective of what he or she has gone through and what the country has gone through.

LEO: One hot topic in physics today is the idea of the multiverse. As a physicist, do you think there are different editions of this book floating around somewhere?
AL: [laughs] I hope that there are, and I hope that some of them are better written. With lots of universes, I’d have a lot of shots at a bestseller in one.

Complimentary appetizers and a cash bar will be provided by the Bristol. Tickets are $10 at the door or $5 in advance. For tickets and information, visit carmichaelsbookstore.com, call 896-6950 or visit one of Carmichael’s three locations.