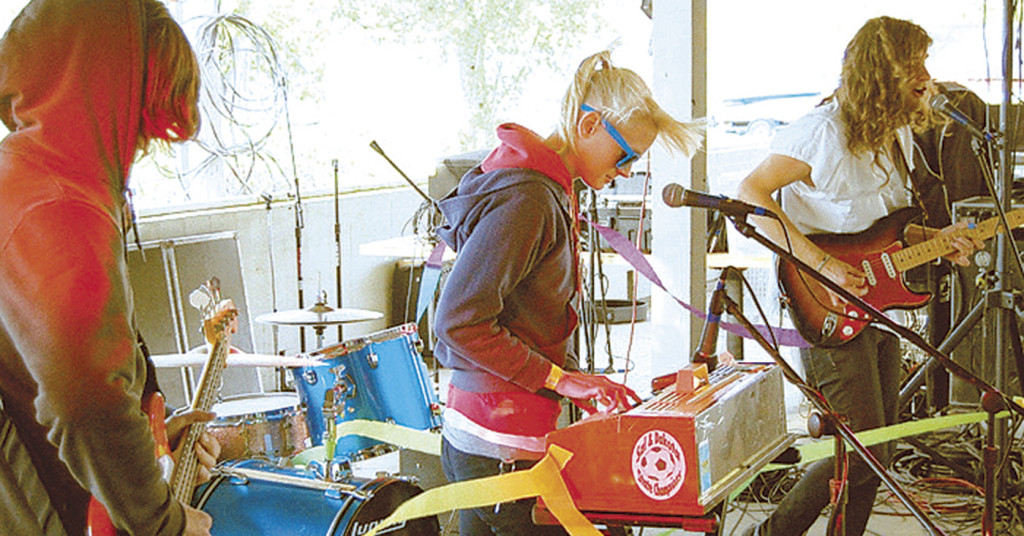 Giving Up came to be in the small town of Garner, Iowa, where three teens conquered boredom with creative output. In 2006, they began their young careers as a rock band, bonding over music, video games and wine.

“We are all kind of weird from growing up there,” says guitarist Mikie Poland. “We learned to live and listen and love in this weird part of the country. Music being an emotive vehicle of communication, I guess it’s intrinsically tied to the environment that you are a product of.”

Two albums and two split cassettes down the road, Giving Up shows no signs of quitting. The latest release is a split cassette with Boston duo Sara Lee, subtitled “Great Friends,” which fueled a recent tour last year. Giving Up currently tours with label mate and friends, Life Partner — “angelic-voiced punk songs born from this beautiful part of America. Seriously one of our favorite bands.”

In two words, Giving Up calls itself “cute” and “gross.” When it comes to influences, part of it is “trying not to get bummed out on people littering, or negative vibes, or all the gnarly, terrible shit on the news,” Poland says. “Or maybe totally embracing all of that, and letting it light a fire under your ass.”

Giving Up delivers just that with dashes of sarcasm, humor and idiomatic hooks relating to a bummed-out, Midwest basement band. They’ve since moved away, but occasionally return to that small Iowa town to “write songs, goof off and feel feelings.”

Catch Giving Up, Life Partner and Neighbor at the New Vintage, Monday Feb. 16. Bring $7 and some friends.