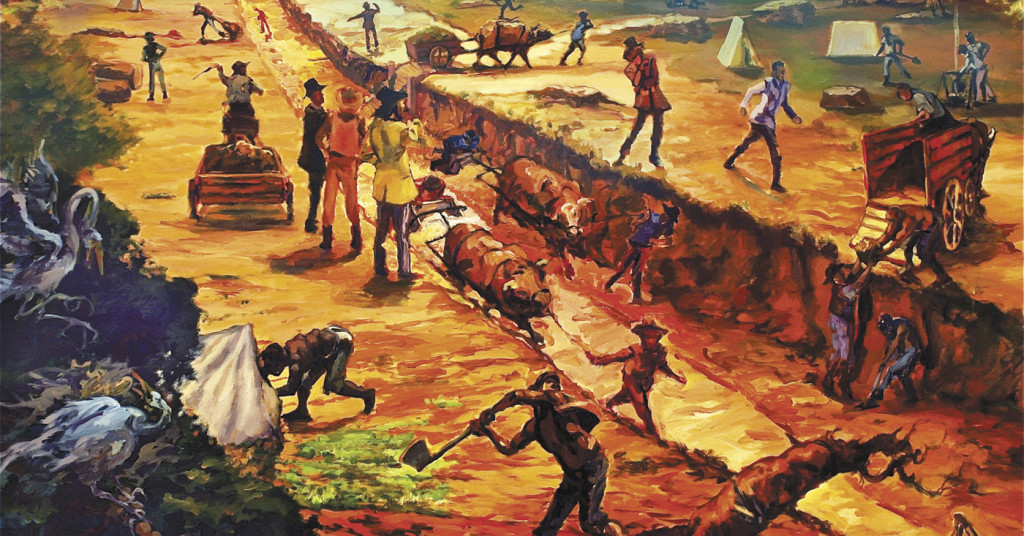 It has been said that the Holy Roman Empire was not holy, Roman or an empire. A similar statement can be made of the Underground Railroad, the clandestine network that succeeded in bringing an estimated 100,000 slaves to the North.

The Underground Railroad (UGRR) is the inspiration for a body of work created by Mark Priest, fine arts professor at U of L. His “Underground Railroad 2015” is vast and best explained by numbers: two current exhibition sites (U of L’s Cressman Center and Schneider Hall Galleries), four series on display (on Frederick Douglass, Charles Nalle and Harriet Tubman as well as the building of Stewart’s Canal), 74 works of art, 2003 (the year he started creating his UGRR art), and one website (markapriest.org).

Priest began visualizing the UGRR after his son wrote a paper on Tubman. “It had so much intriguing history and reality about it,” he says. “It inspired me to start the series.” His interest led him to travel some of the escape routes in Maryland, Delaware, New York and Canada. Using the language of the rails, UGRR referred to guides, such as Tubman, as “conductors,” hiding places were “stations” and the escaping slaves “passengers.”

“I want the viewer to share both positive and negative experiences of the freedom seekers, their families, masters and passengers on UGRR,” Priest states. “My aim is not to glorify them, but to acknowledge their fortitude and love of family and neighbor, and to celebrate the value of all human life. In doing this, I hope to candidly portray the enormous effort that changed the tide of history for the African-American.”

Priest is an artist comfortable with many media, especially painting, drawing and printmaking. Occasionally he created the same scene in acrylic, graphite and etching. He certainly doesn’t shy away from bright colors, often using them for emphasis. “Underground Railroad 2015” is a summation of Priest’s superb skills in technique, design and storytelling.

The Schneider Hall Galleries display the bulk of the art in “Life of a Freedom Seeker: Paintings and Drawings.” The small Tubman series focuses on her attempt to rescue her brothers in 1854. The Stewart’s Canal series depicts the digging of the Maryland canal in the early 1800s.

The most powerful series in the Schneider Hall Galleries is about a person I did not know, Charles Nalle. He escaped from Virginia to New York in 1858; his owner later found him in Troy, an abolitionist town.

Viewers are thrown right into the climax of Nalle’s life, a physical and verbal battle that eventually resulted in his freedom. Priest painted his story on large canvases, almost as if they are storyboards for a film. In fact, they are quite cinematic, with close-ups in the foreground leading us into the action, as in “1000 Person Street Shuffle.”

A public symposium on the UGRR is on Feb. 5 from 1-5 p.m. at the Schneider Hall Galleries, followed by a reception. Another reception is at the Cressman Center during the Feb. 6 First Friday Trolley Hop.