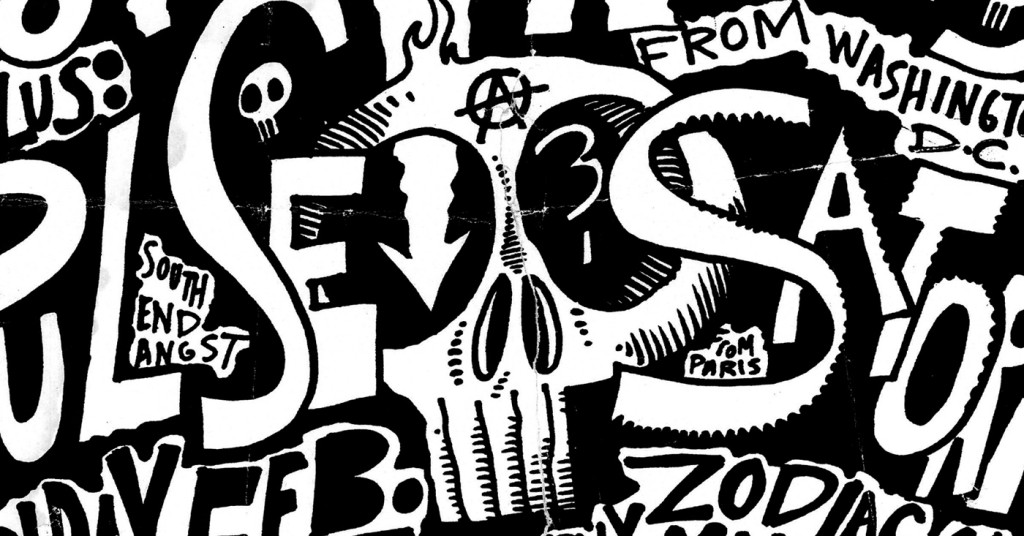 There was a time, before Facebook or Myspace, when flyers were the only means local bands had to advertise their shows. During the early ‘90s, the height of Louisville’s independent music scene, it seemed every telephone pole in the Highlands was plastered with these colorful paper and ink collages that were usually mass produced in caffeine-fueled, late-night copying sessions at Kinko’s. Some of the best of them have been compiled in an upcoming book called “White Glove Test: Louisville Punk Flyers 1978–1994,” which is being published by the Chicago indie rock label Drag City later this year.

“Flyers are not unlike graffiti in a lot of ways, instant advertising done quickly and cheaply,” says local writer Stephen Driesler, one of the book’s editors. “Part of what is interesting about them is their ephemeral nature. These are works that were usually made in an hour or less, probably printed and stapled up on the same night. It is amazing how many of them survived.”

Driesler is one of the six editors of “White Glove Test,” which takes its name from a song by The Endtables, an early Louisville punk band. The book’s other editors are musicians and/or longtime documenters of the local indie rock scene: Mike Bucayu (Kinghorse, Maurice), Tim Furnish (Crain, Parlor), John Kampschaefer, Douglas Maxson (Dickbrains, Your Food), and Shawn Severs. Driesler says the editors’ pedigree was important because it meant they knew exactly where to find the flyers – that is the ones they didn’t already own.

“Tim made a ton of flyers himself, not only for his band, Crain, but for contemporaries like Rodan,” Driesler explains. “Douglas Maxson made flyers back in the early days and he had those. Mike and I were in the middle, a little older than Tim and a little younger than Doug. Between the six of us we were able to span the whole timeframe that we focused on, which we saw as the true golden age of flyers as street art.”

John Kampschaefer died in 2013 before the project was complete. In all, the other editors collected 1,500 flyers. Driesler admits that their meetings were sometimes contentious as they whittled that number down to the 750 that appear in the book. But there was also a lot of consensus among the group. “Nineteen ninety-four seemed like a natural cutoff to us,” Driesler says. “Endpoint played their last show on Dec. 30, 1994. The huge all-ages shows stopped happening for a number of reasons after that. Concurrently, the city started taking a less tolerant stand on flyering. But most important was the rise of the Internet. Bands still make flyers, but they are not as essential as they were then.”

Driesler and company reached out to Drag City for help on the project because the label has released a number of albums by Louisville artists like Bonnie Prince Billy (Will Oldham), King Kong and David Grubbs. The label has not announced an official publication date for “White Glove Test,” but the Kentucky Museum of Art and Craft is giving local music fans a sneak preview. The museum is hosting an exhibition of about 150 flyers from the book. Seeing the flyers displayed in chronological order on the gallery walls is like watching Louisville’s indie rock history unfold before your eyes. The exhibition begins with Louisville’s first punk band, No Fun, which played its first show on Derby Day 1978, and follows the development of the indie rock scene up to that last Endpoint show.

The opening during the Feb. 6 First Friday Trolley Hop from 5-9 p.m. will be a class reunion of sorts for members of the local indie rock scene. No Fun vocalist Tony Pinnotti and guitarist Tara Key, also of the Babylon Dance Band, are expected to be there. At 10 p.m., there will be an after party at Seindenfaden’s Cafe. Kim Sorise will DJ the event, but between sets Driesler promises to play blocks of early Louisville punk. The Germantown music venue New Vintage will also celebrate its fourth anniversary with a “White Glove Test” after-after party on Saturday, Feb. 7 at 9 p.m. Driesler says it will include more old school jams and nostalgia.
“Some of those flyers were visible on the streets of Louisville for years,” he says. “It was really a different era in that regard.”