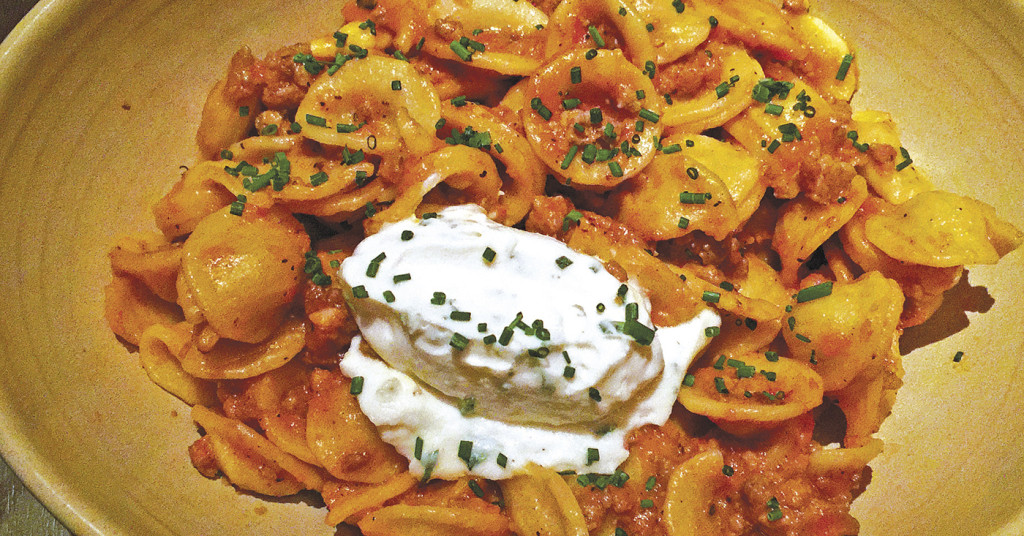 The Orechiette at 8Up | Photo by Robin Garr

Even after many years of wisecracking about food, I have to doff my toque to Calvin Trillin, whose culinary scribblings in The New Yorker and elsewhere surely qualify him as the funniest food writer ever.

So, upon my recent visit to 8UP, the self-described “Elevated Drinkery and Kitchen” atop the new downtown Hilton Garden Inn, it was with great glee that I went a’Googling in search of my favorite Trillin quote about rooftop eateries.

Dang! I couldn’t find it. Oh, sure, Calvin had plenty to say — and not much good — about rooftop restaurants. “I never eat in a restaurant that’s over a hundred feet off the ground and won’t stand still,” for instance.

That’s not the quote I wanted. The way I remember it, Trillin said, “The quality of restaurant fare is inversely proportional to the building-top view.” But apparently he didn’t say that, or if he did, Google missed it. Or maybe I made it up, in derivative homage to the master.

8UP, with its oversize outdoor patio jutting out over the street with a bright sign inviting passers-by to “Hang Up,” is stunning in architecture and decor, a vast, multi-room complex walled in glass, with an oversize bar and dining rooms open to that rooftop view. I’d rank it among the city’s most spectacular venues.

But let’s be frank: You can’t eat architecture, or a view. I think this is what Trillin is getting at with his snark on rooftop dining. The view may bring people in, but it takes great food and service to keep them coming back. How does 8UP stand up?
Well. It certainly wasn’t bad. Much of our dinner was very good, but a few dishes were only so-so. Our server, David, was exceptional: cordial and professionally on-task without being intrusive.

For what it’s worth, 8UP’s general manager Len Stevens has left the building, and executive chef Russell Kook will blast off for Chicago later this month, so things might be a little shaky over there.

Lack of management skills may have helped explain an odd encounter that Mary and I and our friends Anne and Don had when we inquired about meatless options, which are non-existent on the dinner menu except for salads. The small-plates bar menu has some interesting veggie-based items, but — Catch-22 — bar menu dishes are not available in the main dining room.

A bit of whining persuaded them to relent, but this policy seemed odd for an offshoot of an upscale Atlanta-based chain that bills itself as “designed to please the sophisticated palates.”

Charred Spanish octopus ($14) was delicate and succulent, not the least rubbery, with a haunting smoky flavor.

Mussels steamed in beer ($13) were a hit, too, tender and flavorful, with green chiles and bourbon butter to kick them up a notch.
A “small plate” of tempura green beans ($7) wrested from the bar menu was another big hit: Crisp, fresh green beans were lightly cloaked in Japanese-style batter and deep-fried. A spicy sesame aioli came alongside, but the beans were so good that sauce was unnecessary.

Orecchiete with lamb sausage and creamy ricotta ($13) was flavorful if a bit greasy. Crumbled sausage made a sauce akin to ragu bolognese for thick orecchiete (“little ears”) pasta. A touch of mint scented the ricotta.

Scottish salmon ($26) was plated with smoky eggplant puree, cauliflower and pine nuts. Sides of creamed spinach and roasted cauliflower (both $6) were both good.

As dinner wore on, we began to recognize that someone in the kitchen had a very heavy hand with the salt shaker. Save for the bar menu items and salads, everything seemed over-salted. “They would have all been so much better with less salt,” Anne said.

Desserts (all $7) left us with mixed impressions. Salted butterscotch pudding was topped with Heath bar crumble and whipped cream. It was delicious, but I can’t describe its failed presentation without resorting to grade-school toilet humor. Wood oven apple walnut crisp with bourbon ice cream was very good; but a chocolate tart failed via an impermeable chocolate crust that should have been started over.