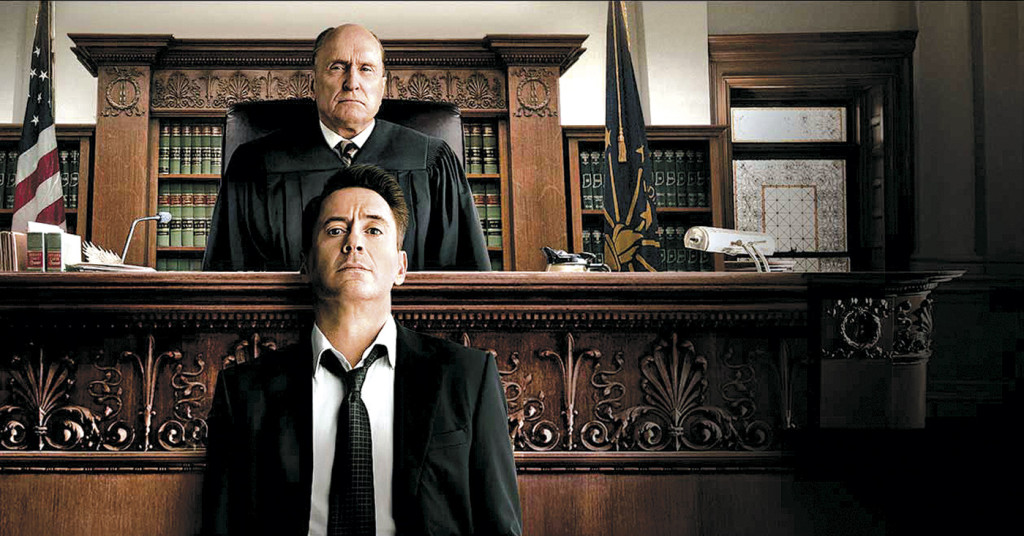 FURY
2014; $22.98; R
We won’t go so far as to call this Brad Pitt WWII tank-tale a misfire, but it did seem an odd entry at theaters for late October. Pitt is the commander of a Sherman tank with Shia LaBeouf and Logan Lerman among his 4-man crew. After some bloody carnage they set out alone on a hopeless secret mission deep in Nazi territory. Incredibly brutal, especially in the “look what one man can do to his brother” torture/killing scenes as the filmmakers strive to make a profound statement about the futility of war and the sanitized way that Hollywood has portrayed it in the past. Or maybe they just like cruelty.

THE JUDGE
2014; $22.98; R
This minor drama exists only as an excuse for Robert Duvall and Robert Downey Jr. to share a stage. Thank you God! Downey is a big-mouthed big-time lawyer who returns to his little Hoosier hometown to bury his mother – then steps in to represent his estranged father (Duvall), a respected judge, on trial for murder! These two wildly dissimilar Hollywood vets turn the “minor drama” into a master class for would-be thesps, and fans have pressed for Oscar nominations. Vera Farmiga, Billy Bob Thornton, Vincent D’Onofrio, Leighton Meester and a host of other lessor lights battle for remaining screen time.

ABSTRACTION
2013; $21.98; UR
While advertised as an action-crime story, in reality this is a straight-up drama about a pair of clever criminals and an even more clever woman. Thieves Hunter Ives and Richard Manriquez watch their latest heist go up in smoke, forcing them underground. That’s when Ives falls for sexy Korrina “Horrible Bosses 2” Rico, who floats the idea of an “easy” one-time half-million-dollar art heist. What happens next is surprisingly inventive and original for such a low-budget film. Nicely done; worth your time.

A-CHANNEL
2011; $19.98-59.98; PG-13
A welcome Blu-Ray release of the wildly popular anime franchise noted for its humor and exceptional animation, despite a seemingly bland premise. Four young girls learn about life and love at an all-girl school, relying on their close friendship to smooth out life’s bumps. Japanese society has never discouraged feelings of romantic affection between youngsters, treating them as a healthy part of growing up, making this a parent-approved and completely innocent slice-of-lifer with zero “fan-service” scenes between its adorable cast of skinny, uniformed big-eyed waifs. Adorable.

BOMBSHELL BLOODBATH
2014; $22.98-24.98; UR
Fellow fans of no-budget shock-cinema will enjoy this unrepentant — yet high-quality — gore-fest starring Alex Elliott, soon to be seen in the upcoming “Night of the Living Dead: Genesis.” But the real stars are clearly the exceptional makeup artists who created the flick’s impressive zombies: They are ghastly creations along the lines of “The Walking Dead,” if even more imaginative, with a definite nod to ’70s/’80s Italian horrors. With an attractive cast of veteran indie-horror actors, tight direction and great dark humor, this is definitely worth your time.

CRIME SCENE CLEANER
2011; $29.98; UR
Better known in its native Germany as “Der Tatortreiniger,” this series has become a hit every place around the globe it has been broadcast. The simple ongoing saga of Heiko “Schotty” Schotte, a HS dropout who now cleans up the blood, shit and sputum of crime scenes once the police have finished with them. His only goals in life? A hot girlfriend and a fast car! And, uh, to be Germany’s greatest-ever crime-cleanup-guy. The comic misadventures usually begin once the bereaved families show up, pushing their own agendas. Original and funny as hell; you just gotta see this!

THE COLOR OF TIME
2012; $13.98; UR
James Franco continues his search for unique opportunities and new horizons. Here he plays Pulitzer Prize-winning poet C.K. Williams, a man famously haunted by loss, heartbreak and memories of his first sexual experience, despite having a perfect wife (Mila Kunis) and young son. But what makes this movie unique is that it has 11 writer-directors, each looking at the man’s life in turn from their own perspective. One of the most surprising movies of recent memory, with an all-star cast that includes Jessica Chastain, Zach Braff, Henry “Restless” Hopper and Bruce “Evil Dead” Campbell.

THE PIRATES
2014; $20.98; UR
This Korean tale is such an off-the-wall hoot that we just couldn’t resist telling you about it. A new emperor is about to take the throne when a thief steals his all-important Royal Seal — which then gets swallowed by a whale! Lured by the massive reward, every dreamer, thief, pirate, scumbag, scallywag, marauder, privateer, buccaneer, corsair and nogoodnik in the land commandeers a boat and sets out to retrieve it, regardless of the danger. Stars Ye-jin Son, Nam-gil Kim and a host of soon-to-be fish-flakes. How could this not be great?

THE STORY OF WOMEN AND ART
2015; $21.98-34.98; UR
Women, it has been said, are the only works of art — which has made it difficult for them to be artists: society wants them on the canvas, not holding the brush. This 3-part doc from the BBC follows the trials and invention of female artists from the Renaissance on as they struggle to express themselves in some way other than lounging on a divan, exposing their charming secondary sexual characteristics. We found it interesting that their output has influenced our daily lives — clothing, products, comfort, lifestyle, etc. — far more conspicuously than the work of men. Worth your time.

*** More Recommended Videos for our On-Line Readers, Only!
HENRY V
1989; $19.98; PG-13
Over a quarter-century ago Kenneth Branagh drank deeply from the Well Of The Bard in his campaign to be the next Olivier, receiving an Oscar nomination for this portrayal of the 15th-century British ruler who leads his troops into a lopsided death-match against the French. A bit long for our tastes, but Branagh makes it all seem worthwhile – and with dated DVDs now going for $90 or more, this nice, clean Blu-Ray makes us scream, “For this relief much thanks; ‘tis bitter cold. And I am sick at heart!”

JEAN DE FLORETTE / MANON OF THE SPRING
$19.98; PG
The classic French double feature, dubbed instead of subtitled for those who prefer that sort of thing. In the first, city-boy Gerard Depardieu moves to the blissful sticks after inheriting the family farm from his mother, unaware that greedy neighbor Yves Montand has put in motion a clever scheme to steal the land for himself. The second finds doe-eyed nymph Emmanuelle Beart (“Mission Impossible”, 1996), whose nude cinema work so brightened the ‘80s and ‘90s, going postal as only a woman can on the man who killed her father and stole the family farm (Montand, again).

KINGDOM OF DREAMS & MADNESS
2013; $24.98-29.98; PG
Even if you don’t know the name Studio Ghibli, then you certainly know the films “Princess Mononoke” and “Spirited Away”, two perfect products of its founders, Hayao Miyazaki and Isao Takahata. Arguably the world’s greatest animated filmmakers, these two very private men have never allowed outside cameras inside their sacred studio – until now, as Mami Sunada follows them during completion of Miyazaki’s final film, “The Wind Rises”, and Takahata’s “The Tale of The Princess Kaguya.” A most welcome visit, indeed.

LOG HORIZON: COLLECTION 2
2014; $39.98-69.98; UR
More from this surprising anime series about a massive online role-playing game that swallows 30,000 of its most ardent fans, trapping them in the game’s alternate reality. In this second season, the main characters have succeeded in quelling the goblin invasion to establish a working society. Now they must decide whether to stay in their safe city or set out to explore more of the world of the Elder Tales. Marked with clever, mature plots, fantastic artwork (there are college art courses which pick apart each scene for composition and analysis), rich music, fully realized characters and effortless dialogue, this is the anime series for people who don’t think they like anime.

MARIE’S MIND FOR MURDER: SET 1
$39.98; UR
Another German TV import that’s so good you won’t mind reading the subtitles. Inspector Marie Brand (Mariele Millowitsch) is easy to underestimate: She often doesn’t seem focused or even interested in what’s going on around her. But that’s because he mind is lasered into details that everyone else is missing, those seemingly insignificant clues that, taken together, reveal volumes. Plus this lady’s got the best bullshit detector in the business. When assigned to be the official pain in the ass of ace Inspector and self-professed lady’s man Simmel (Hinnerk Schönemann), he works feverishly to be shed of her until he sees what she can do. Now they are the best team in the murder business. Truly outstanding TV.

NICOLAS LE FLOCH: VOLUME TWO
2009; $29.98; UR
Four big episodes from this wildly entertaining and very authentic French TV series set in 18th century Paris, the perfect place for a dashing young police commissioner to ply his trade. The set starts with a murder, the work of master thief, “The Claw”, leading to a smart and exciting chase through churches and brothels, stately mansions and urine-soaked alleyways, allthewhile collecting clues and bedding bodacious beauties as required to stop this bandit once and for all. Jérôme Robart from “A Burning Hot Summer” plays the sleuth with an exuberant combination of experience and surprise. Engrossing and fun.

RED VS. BLUE SEASON 12
2014; $9.98-14.98; UR
Can you believe that this Halo-inspired comedy/action series from those fair-haired lads at Roosterteeth is still going strong after a dozen seasons? Amazing. Two discs – over 2 HOURS – of silly scifi mayhem and unabashed tank romance for the price of a Happy Meal. Remember to stock up on Red Bull.

SILENT YOUTH
2012; $24.98; UR
Another in the recent wave of innocent young Gay love stories, this one from Germany. Two boys, Marlo and Kirill, literally bump into each other on the streets of Berlin. The first is instantly infatuated with the second, and spends the rest of the day following him around town. Confused by his thoughts he imagines several clever ways to introduce himself. He finally does, of course, setting in motion a flood of feelings that are exciting and confusing for both.

THE REMAINING
2014; $22.98; PG-13
Clearly inspired by “Left Behind”, this invokes the Christian”Rapture” myth to interesting – if not entirely original – effect. All Hell literally breaks loose at a wedding, leaving six friends to decide what they’d rather pray and die or run and live. The best reason to watch it is the cast, lead by Alexa “Spy Kids” PenaVega, who has grown into not only a strikingly beautiful woman, but one helluvan actress. Fans of YA TV will also recognize Shaun Sipos of “Vampire Diaries”, Bryan Dechart from ABC’s “Jane By Design”, and Italia “Chasing Life” Ricci.