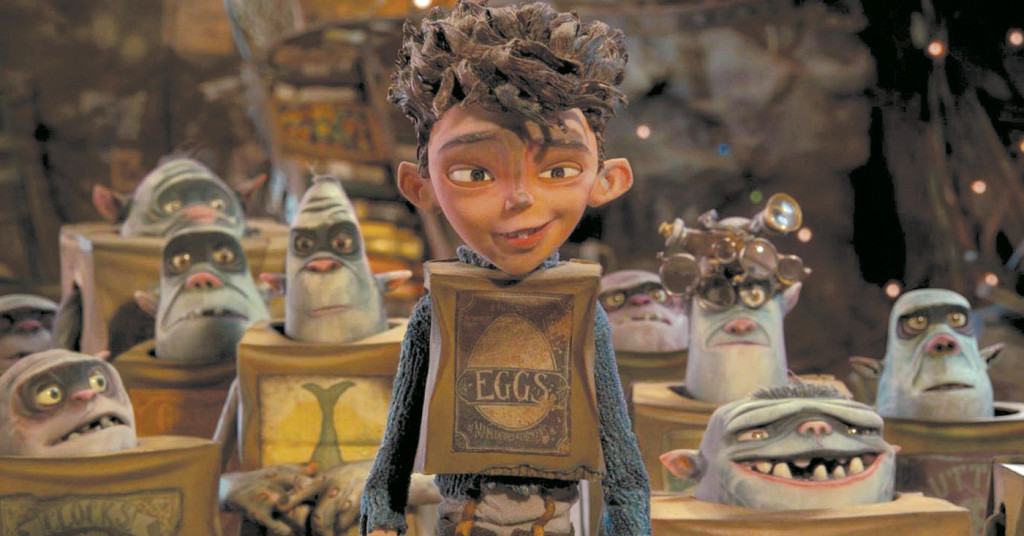 THE BOX TROLLS
2014; $33.98; PG
Regular readers know that we are unabashed loons for stop-motion animation – and this screwy fable has certainly raised that bar to new heights! In a sort-of-Victorian village, babbling creatures dressed in old cardboard boxes emerge at dusk to gather scraps of machinery and new, uh, old cardboard boxes. Legend declares that they are baby-stealing monsters, but in truth they are harmless, lovable oddballs: easy scapegoats for everyday misfortune. An orphaned human boy, raised as one of their own, becomes aware of who he is and, teaming with a feisty young girl, sets out to save his friends from obliteration at the hands of the town’s evil Snatcher. Lots of great voice work all around, but the visuals are clearly the star. Our highest recommendation.

THE MULE
2014; $14.98; UR
This little gem slid in under the radar from Australia and completely blew us away! Angus “Insidious” Sampson plays a would-be first-time drug mule. When spotted by Detective Hugo Weaving with a butt-load of narcotics, he has nowhere to go. So he doesn’t. Go, that is: He decides to simply not poop: withholding the evidence until he can assure his freedom, leading cops, drug dealers, family and friends on an hilariously dark journey. Supposedly inspired by real events, this is an absolute must-own. Our highest recommendation.

ALIEN RISING
2013; $21.98; UR
Lance Henriksen and John Savage may share star billing, but TV faces Amy “Buffy” Hathaway, Brian “Charmed” Krause and especially B-movie vet David Vescio are seen more often in this low-rent tale of spooky alien tech with time-travel options. Yeah, that kinda reminds us of “Edge of Tomorrow” too, but this goes in a different direction. Pairs well with cold beer and an old, comfy couch.

ANNABELLE
2014; $22.98; R
This prequel to “The Conjuring” provides backstory for the demonically infested doll who appeared in, but had little to do with, that film. Here she starts as a gift to pregnant Mia (played ironically by Annabelle “Pan Am” Wallis) from loving hubby and former soaper Ward Horton, only to become a vessel for storing evil by the local satanic cult (apparently they were all out of Tupperware). Of course, this is just an excuse for those patented shock scenes created by the film’s real stars, our buds at KNB EFX. Fun stuff.

BY THE GUN
2014; $24.99; R
A straight-up low-rent Goomba mob saga starring Ben Barnes (“The Words”) as a charismatic tough who works his way up Boston’s crime ladder to the point that he becomes a problem for the Don’s second-in-command. Add in a couple of obligatory cameos (Toby Jones, Harvey Keitel), a few bare boobs (Julie Ann Dawson), and you got you’-self a freakin’ mooovie!

LUCY
2014; $22.98; R
Right up front: This is a silly damned flick, created by Luc “The Fifth Element” Besson for the sole purpose of displaying Scarlett Johansson’s profound physicality as she marches headlong into the camera. Repeatedly. Yes, the man is truly a visionary. Plot? Oh, some nonsense about SJ having a belly full of magic drugs that give her the power to bend all of reality to her will. Frankly, she can bend us any way she wants; reality be damned. Morgan Freeman pops up occasionally to intone snippets of expository nonsense in his deep, resonant voice. Fun.

MEN, WOMEN & CHILDREN
2014; $19.98-29.98; R
Director Jason “Juno” Reitman’s latest explores the Internet, or more accurately: how our society has embraced today’s communication overload to the detriment of family, friend and sexual relationships. With an outstanding cast that includes Adam Sandler, Jennifer Garner, Rosemarie DeWitt, Judy Greer and Emma Thompson, Reitman paints focused vignettes where each character represents a particular social failure, suggesting that we – both personally and as a society – need to grow out of this infantile fascination with cellphones and social media, or humankind, itself, is doomed.

ON GOLDEN POND
1981; $19.99; PG
Henry Fonda (in his final role) and Katharine Hepburn both won Oscars for this nicely prickly tale of old folks and their adult kids and grandkids that succeeds in being sentimental and loving without being soft on anyone concerned. When Fonda and Hepburn visit their lakeside summer home, estranged daughter Jane Fonda, her new man Dabney Coleman, and his son Billy come to visit. Hank bonds clumsily with the kid and everyone learns something about Life. Corny? Not on your life! This thing rawks in a way that’s hard to describe, but never fails to move us. Now available in a Blu-Ray Collector’s edition.

THE ATTICUS INSTITUTE
2015; $19.98; UR
Bearing the tag line, “Based on the only case of Demonic Possession recognized by the U.S Government!” this spooker from the makers of “Annabelle” details the “true” events at a 1976 psychology lab that ended with the military storming the place to “protect national security.” Why the military? To weaponize all this demonic power, of course! Noisy dumb fun.

WELCOME BACK, KOTTER: SEASON TWO
1976; $24.98; UR
Season Two of this groundbreaking urban comedy took several field trips out of the classroom, with Mr. Kotter (Gabe Kaplan) escorting the Sweathogs to boxing rings and museums. Meanwhile, at home, Mrs. Kotter (vastly underrated Marcia Strassman) struggles with the demands and joys of pregnancy. The trip to the museum has to be our favorite of the season, if only for the presence of the inimitable John “Gomez Addams” Astin as a cracked curator who weirds everyone out, yet sparks the curiosity of Barbarino (John Travolta). Also available in a complete-series boxed set for under $100.

A WALK AMONG THE TOMBSTONES
2014; $22.98-34.98; R
Hey, Liam? Liam Neeson! Can we have a word with you, dude? Ya know we love you like a brother, and this whole “aging ass-kicker” genre you’ve created simply rawks big time. But, dude! You need to do something else every once in a while so people don’t forget what a damned-fine actor you are, ya’ know? Okay, so this time you’re bustin’ heads to save a beautiful woman and … uh, wait … you’re always bustin’ heads to save the beautiful woman, aren’t you? We aren’t complaining, mind you: Nobody plays a brooding, lethal detective-hulk like you. We’re just sayin’ you should mix it up, ya’ know? Any chance you’d consider doing a sequel to “Schindler’s List?” Great flick, by the way.

LOOKING: SEASON 1
2014; $22.98-39.98; TV-MA
To be perfectly honest we had never heard of this HBO Gay comedy before, but we won’t make that mistake again. Jonathan Groff, Frankie J. Alvarez and Murray Bartlett star as three close friends/roommates fishing for hookups in San Francisco. And the best thing about it is that it has such a breezy, lightweight feel. There’s none of the social “importance” that weighed down “Queer As Folk”: just three guys on the prowl, looking for some laughs. And speaking of laughs, Scott “Quantum Leap”/”Star Trek: Enterprise” Bakula is in a half-dozen episodes this season that completely blew us away. The guy has some serious comic chops.

RUDDERLESS
2014; $19.98; R
First-time director William H. Macy does a damn-fine job with this dark comedy/drama that culminates in a very natural, believable life-affirming conclusion. Billy Crudup stars as a grieving father, wracked with guilt that he didn’t know his late son better – until he finds a pile of the son’s unpublished songs and begins playing them around town. This attracts the attention of complete stranger Anton Yelchin, who forms a band called “Rudderless” to promote the songs. We agree that all sounds hokey, but you can thank Macy’s storytelling skills for making this such a joy. And watch for nice bits by Felicity Huffman and especially Selena Gomez in small roles. Worth your time.

THE ZERO THEOREM
2014; $25.98; R
Director Terry Gilliam (do we really need to go on?) brings us another of his patented flights from insanity to brilliance, clearly the most focused thing he’s done since “Brazil.”  Christoph Waltz stars as a mad computer guru, hired to complete the ultimate project, one that will either divulge The Meaning Of Life, or prove forever and always that there is none. Of course, this being Gilliam, the journey is populated with herds of truly bizarre and confusing characters, including supervisor David Thewlis, flirty Mélanie Thierry as His One Desire, Matt Damon as The Boss, and Tilda Swinton as the pyscho-medic, Dr. Shirnk-ROM. To say more would be superfluous. Like life, you just have to experience it yourself.