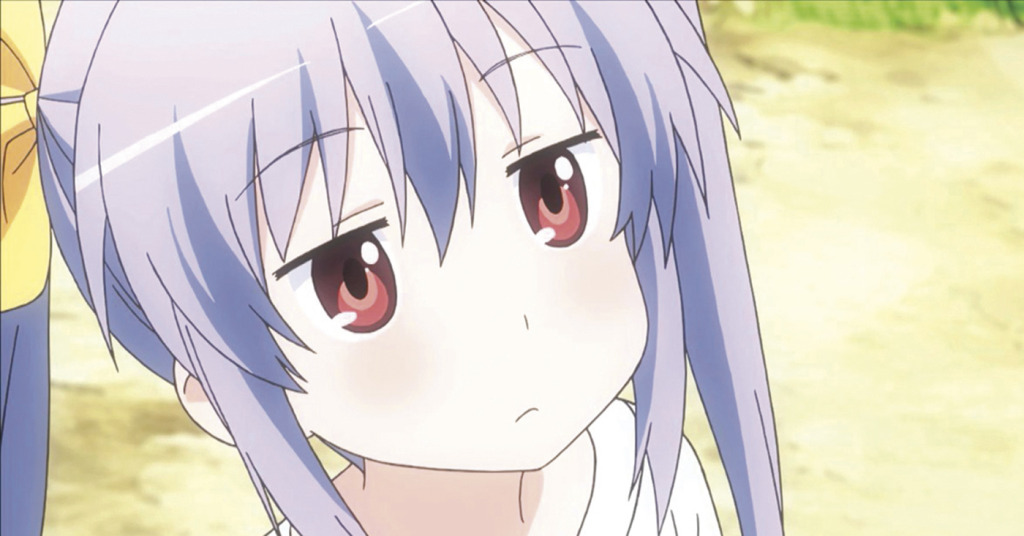 NON NON BIYORI
2013; $34.98-59.98; UR
This week we present a contrast in “fan service”: a term suggesting the level of nudity, sex, violence and gore in Japanese animated offerings. “Biyori” is a perfect example of the “slice of life” genre: With no fan-service, it is the simple, ongoing tale of the rural life of six girls aged 6-14, the only students at a small, isolated grade/middle school. The plots aren’t as much about conflict resolution as they are the evolving viewpoints of the group. Gentle, thought-provoking, and occasionally laugh-out-loud funny, this show is most popular among women and young girls.

QWASER OF STIGMATA: COMPLETE COLLECTION
2010; $69.98-99.98; UR
At the other end of the spectrum lies “Qwaser”, which combines social dysfunction, martial arts, supernatural creatures, religious Adepts, the Virgin Mary, and Qwasers — beings who maintain their magic-like power over the elements by suckling the breasts of special young girls called “Maria.” Not surprisingly, there is a great deal of fan-service to be found in its convoluted plots: teasing nudity, slobbery nipples, lesbian encounters, feel-ups, bad boys and bondage. The fan base includes adult men and teens of both sexes.

A HORSEMAN RIDING BY
1978; $35.98; UR
A good-natured stiff-upper-lip drama series that could only have come from the BBC. Nigel “Chariots of Fire” Havers stars as a wounded war vet, the new Squire of Sorrell Valley circa 1902. It’s a tough gig, which he nearly abandons until meeting fiery “modern woman” Fiona Gaunt (“War & Peace”) and the more traditional Prunella Ransome (“Far from the Madding Crowd”). Ultimately, this well-remembered series, based on the books of R. F. Delderfield, is a study in how to preserve the good things in the world while everything around you changes. Timeless.

BAD TURN WORSE
2013; $19.98-22.98; UR
We make no apologies for our love of indie films, and this flick is a perfect example why. A trio of teens in rural Texas desperately wants to escape their expected future at the local cotton mill. This leads to a string of bad decisions, putting them in the cross-hairs of local crime boss, Mark Pellegrino (“Being Human”). The three – Jeremy Allen White (“Shameless”), Logan Huffman (“V”), and skinny-cute Mackenzie Davis (“Breathe In”) – are so believable and well-written that you quickly forget you’re watching a movie and become immersed in their plight. Good stuff.

CAPRICORN ONE
1978; $9.98-24.98; PG
A fondly-remembered ‘70s turkey from director Peter Hyams. James Brolin (“Marcus Welby, M.D.”) leads an all-TV-star cast in this tale of a NASA mission to the Red Plant that is faked after a lethal design flaw is found in the capsule. Problem is … the returning (empty) ship is destroyed in splashdown! Whoopsie. So, how to explain those pesky live astronauts? Brolin eats a raw snake. Finally available on Blu-Ray.

JIMI: ALL IS BY MY SIDE
2013; $16.98; R
Johnny Allen “Jimi” Hendrix left New York in 1966, a penniless session player who made others sound good. But just one short year later, after a stint in London clubs and his breakthrough performance at the Monterey Pop Festival, he would win world-wide acclaim — and be dead in three years. This biopic starring André Benjamin takes us inside that pivotal year with an intimate and humanizing look at the trials of a superstar in the making, a man totally unprepared for the machinations of record companies (who would make more money from his death than they could ever have made from his life) and his insatiable need to create.

STINGRAY: THE COMPLETE SERIES 50TH ANNIVERSARY EDITION
1964; $27.98-34.98; UR
Stand by for action! Man, are we in geek heaven as Shout!Factory releases this wooden chestnut from our childhoods. Bill likes to tell of his Dad sleeping in on Saturdays — until little Billie, sneaking into the living room, powers up the big GE console with a whump! at 6 a.m. to watch “Stingray” or one of the other Gerry Anderson SuperMarionation classics. Many ass-whoopings later and he’s still a big fan. Thirty-nine super-submarine adventures, plus a neat featurette, all from 1964-65 with puppet-heroes Capt. Troy Tempest, Lt. George “Phones” Sheridan, Commander Shore and curvy Lt. Atlanta Shore — voiced by Lois Maxwell, 007’s original Moneypenny! Previously valued at $150, now here for all to own for less than $35. What a time to be alive.

THE FACTS OF LIFE: THE COMPLETE SERIES
1979; $179.98; UR
In one of TVs most popular YA dramedies, Lisa Whelchel, Kim Fields, Mindy Cohn and Nancy McKeon starred as mismatched girls trying to find themselves at a NY boarding school, mothered over by Charlotte Rae as “Ms. Garrett.” Famous for taking on very serious subjects for its day, this was a favorite of parents and young girls, and all the stars went on to successful careers both in front of and behind the camera (buxom Welchel co-starred in Tyler Perry’s “A Medea Christmas”). Watch for guest stars including a young George Clooney, Molly Ringwald, Jami Gertz, Eve “Jan Brady” Plumb and Mayim “Big Bang” Bialik.

TWO MOTHERS
2013; $24.98; UR
This German-made drama about a same-sex couples’ attempts to have a child is one of the most real and intimate things we’ve ever seen. Artificial insemination is routine for “normal” German couples, but lesbians must go through an expensive legal process clearly designed to dissuade, and the women’s personal decision to exclude the sperm-donor from any future parental decisions doesn’t help. Painful, honest and disturbing.

Katharine Isabelle, who famously portrayed distaff-werewolf Ginger in 2000’s terrific “Ginger Snaps”, is having a ball in this steamy actioner as the amnesiac hottie who stumbles into a roadside diner — the only thing she remembers for sure is that her lover has just been murdered! Fortunately the great Christopher Lloyd is there to help (or is he?), in one of a number of supposed “Back To The Future” references that fans have noticed/invented. A fun case of time-line disorientation with Kyle Schmid (“Copper”, “Being Human”), Jesse McCartney, and a cameo by Michael Ironside. We liked it!

We often herald British dramas as vastly superior to our own, and this series is a perfect example. Imagine your favorite TV cop show, but with realistic blood, gore, and disgustingly blue dead bodies. Then note that the police – flawed individuals beset by drink, violent outbursts, and poorly-chosen sexual dalliances – don’t really have a clue, they’re just average people doing the best they can. Redheaded Kelly Reilly (“Sherlock Holmes”) and Ciarán Hinds (“Tinker Tailor Soldier Spy”), lead a powerhouse cast in some of the best TV we’ve ever seen. Four discs; almost nine hours of superb suspense and mystery.

One of the most notorious films in history, this Werner Herzog chestnut tells of a crazed Peruvian plantation owner (Klaus Kinski) who dreams of staging a grand opera in the little jungle town of Iquitos. Being quite mad and quite rich, he hires a men to literally carry a 300+ ton steamboat through the jungle. Now available on Blu-Ray – but make sure you also buy a copy of “Burden of Dreams” (1982), the even more incredible behind-the-scenes story of the making of “Fitzcarraldo”, with real local natives dragging a real steamboat through the Amazon jungle!

Ian “Pillars Of The Earth” McShane returns as the titular antique dealer/antihero in this rakish BBC series, a man whose only talent seems to be getting into trouble. With his home and headquarters now repossessed, he has no choice but to turn to the dark side, launching a scheme with a priceless Stradivarius that he, Eric and Tinker ((Chris Jury and Dudley Sutton, both from “EastEnders”) market as a “real fake.” These con-games don’t exactly help his relationship with Lady Jane Felsham (Phyllis “Downton Abbey” Logan), who must continually save his bacon via comic non-intervention. A truly addictive series that we simply can’t get enough of. Recommended.

ONCE UPON A TIME IN SHANGHAI

Kung-fu superstar Sammo Kam-Bo Hung, who generally works behind the camera these days, making only cameo appearances in movies, assumes a major role in this actioner featuring both Andy On (“Special ID”) and Philip Ng (“Zombie Fight Club”). The plot is inconsequential – essentially a remake of 1972’s “Boxer from Shantung” – to On’s nearly superhuman fighting skills and Ng’s brutal homage to Bruce Lee’s physicality. With just the right mix of humor, drama, and acrobatics, plus a treasure trove of Kung Fu cameos for those in the know, this thing rawks.

A perfect example of how not to make a movie. Super-directors Walter Hill, Francis Ford Coppola and Jack Sholder collaborated on this potentially groundbreaking space-opera, then removed their names from the credits after seeing what the studio did to their work. Imagined as a man-against-God opus with “2001” and “Altered States” elements, it’s now just another space-rescue retread ending in a big special-effects explosion. Still entertaining, and this new Blu-Ray includes some of the stuff the studio cut out, with Robert Forster, James Spader, Angela Bassett, and Peter Facinelli.

ZODIAC: SIGNS OF THE APOCALYPSE

This SyFy Channel howler “stars” the great Christopher “Back To The Future” Lloyd as “first guy in the credits”, but greater screen time goes to Joel “NCIS” Gretsch, Reilly “Supernatural” Dolman and absolutely adorable unknown Andrea Brooks from Canada’s “Un-Real” as Ms. Nubile Eye-Candy. When a cheap special-effect signals the end of the world, only the combined talents of humanity’s worst actors can save us – and only during that mysterious seven minutes between “last commercial” and “roll credits.”