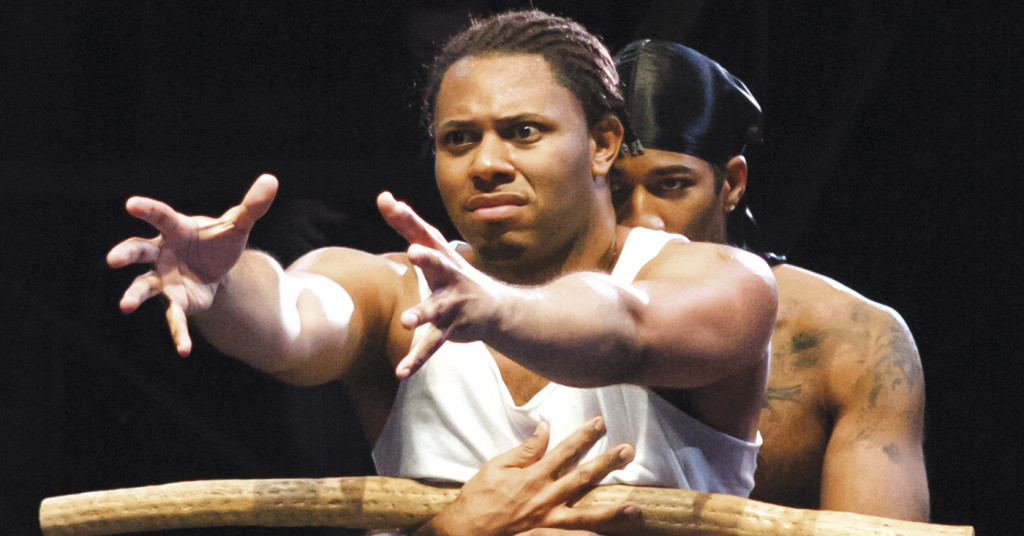 It would be a brilliant programming stroke if it had been planned – but in some ways it’s even more satisfying that it happened by chance. Actors Theatre of Louisville and Pandora Productions are simultaneously presenting two acclaimed plays that explore the nature of identity, choice and destiny through the metaphor of a triangle. At ATL, the story plays out in a deep southern drawl against the backdrop of the African-American experience in Louisiana. At Pandora, it’s told in a British accent and deals – on the surface, at least – with complicated issues of gender and sexuality.

This is a rare opportunity to see two very closely related contemporary masterworks that inform one another in a very distinctive way. Whether you’re a student of theater, a lover of story-telling or just looking for an entertaining and thought-provoking experience, you should try to see both.

‘The Brothers Size’
A summary of Tarrell Alvin McCraney’s play “The Brothers Size,” which opened last week at Actors Theatre of Louisville, sounds much like a stock Blaxploitation flick. Newly released from prison, Oshoosi Size (Larry Powell), a blithely immature ex-con has just returned to his Louisiana home and taken up lodging with his brother Ogun (Che Ayende). Ogun is a hard-working auto mechanic who owns his own business. He’s a stern fellow, whose concerns and hopes for his brother lead him to fume and fulminate about the latter’s layabout ways. Then,Oshoosi’s erstwhile fellow-inmate Elegba (Ronald Kirk) appears on the scene, and we immediately know that Oshoosi’s future is fraught with difficult choices and uncertain outcomes.

A program note alerts us that the tale is inspired by Yoruban storytelling traditions and that the characters are named after orishas – entities that manifest specific dimensions of the unifying Yoruban deity Olodumare. Thus, Ogun is the orisha of war and iron, patron of blacksmiths and warriors; Oshoosi is a wandering hunter who represents and advocates those who are imprisoned; and Elegba is a trickster and troublemaker whose role is to feed the gods by luring people into missteps.

But if the script aspires to a mythopoetic grandeur, it expresses itself in stereotypical dialect that seems ripped from those flicks – or a less than stellar hip-hop soundtrack. And it’s hard to tell whether the audience laughter that frequently erupted on opening night was a response to genuine wit or simply to the shock value of frequently used racial epithets and discussions of women laced with locker room rhetoric.

I’m inclined to think it’s the latter, but in fairness “The Brothers Size” has earned rave reviews everywhere it’s played. It’s a youthful work, written while McCraney was a student at the Yale School of Drama, and it looms with promise (it’s part of a trilogy that has also earned critical acclaim).

Here, McCraney’s characters are exciting because they are, at root, clashing manifestations of a unifying impulse, and under Tea Alagic’s direction those tensions ignite in powerful performances that define the designated archetypes. In this world, character – not choice – seems to determine destiny. And all three actors embrace their fated roles with a fierce single-mindedness that is technically astonishing. The production offers an outstanding fusion of physical and verbal virtuosity.

There’s another virtuoso performer on the stage as well. Throughout the production, percussionist Ben Williamson weaves a nuanced web of pulsing, whirring, shimmering sound that punctuates, comments on, and sometimes undermines the action and the dialog. And there are moments when those beats, spoken rhythms and chanted cadences build into a riveting, and satisfying blend.

At the end, the hard-edged archetypes yield, iron bends and the brothers try a little tenderness. The result is a bittersweet emotional payoff that is as satisfying as it is conventional.

‘Cock’
There’s nothing even slightly conventional about Pandora’s “Cock,” by Mike Bartlett, at the Henry Clay Theatre. Even the title yielded a delicious bit of controversy when it opened Off-Broadway in New York. The New York Times reviewer famously couldn’t use the actual title for fear that readers would be offended. Instead it was referred to as “The Cockfighting Play” — presumably because a blood sport involving poultry is less offensive to readers than slang for a male body part.

And it’s true that the cockfighting metaphor is embedded in the story, which is staged on a simple ring and plays out in rounds punctuated by the sound of a bell.

On the surface, “Cock” is the story of a love triangle. John (Zachary Adam Hebert) and M (Neill Robertson) are a gay couple and seem happy enough, though we quickly learn that John is a cautious, risk averse sort and M is a guy who is ready for anything. Then one day John strikes up a conversation with W (Melinda Beck). One things leads to another, and John finds himself torn between not just two lovers, but two notions of his own identity and two visions of his future life.

Intricate back-and-forth sequences and brilliant dialogue pull us deeply into the uncertain landscape of John’s dilemma and the anguish it brings to his two lovers – and to M’s father F (Tony Prince). And this is a script rich in ideas and language. There is plenty of sex talk – but even the most intimate discussions never once yield to locker room cliché.

And under J.R. Stuart’s direction, the performances are marvels of insight. Hebert walks an actor’s tightrope as he plays a character who is simultaneously wreaking emotional havoc on the two people he ostensibly loves. Robertson brings a mercurial flexibility to his role, sometimes cultivating an ironic campiness, sometimes melting into despair and sometimes flying into an unrestrained fury. Beck is innocent, but wily. And Prince’s rustic authenticity adds a satisfying dollop of gravitas to the proceedings.

And though it’s the story of a love triangle, here the triangle itself is a gateway to something more profound, and never — even at the end the play — never compromises its integrity. •