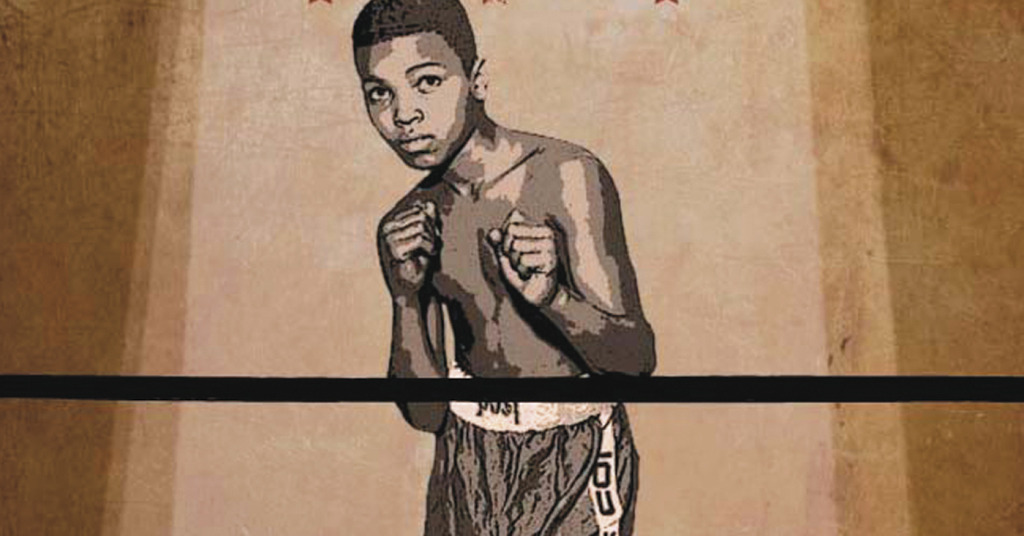 A couple of years ago, Peter Holloway, executive director of Louisville’s StageOne Family Theatre, phoned playwright Idris Goodwin to propose the idea of writing a play about the young Cassius Clay. In a phone interview from his home in Colorado Springs, Goodwin recalled the moment: “Before he could even get the words of out his mouth, I was saying, ‘Yes! Are you kidding?’ I thought there might be some kind of a catch – like maybe first I’d have to write a play about Rutherford B. Hayes or something.”

But there weren’t any catches. And thanks to a partnership between StageOne and the Muhammad Ali Center, Goodwin’s new play, “And In This Corner … Cassius Clay” opens Jan. 17 – Muhammad Ali’s 73rd birthday – with a gala world premiere followed by weekend performances through Feb. 14.

Goodwin is no stranger to Louisville. He’s contributed twice to the Actors Theatre of Louisville Humana Festival of New American Plays, first in 2012 with his innovative hip-hop-inflected play “How We Got On,” and last year as co-author of “Remix 38.”

The opportunity to explore the young Cassius Clay was especially appealing, says Goodwin, partly because it’s a story that isn’t well-documented, and partly because it takes place in a seminal period in American – and Louisville – history. “In my household, Ali is one of the figureheads. He’s a hero. So having the chance to write this play is like a dream for me.”

The Ali Center furnished Goodwin access to archival resources, introduced him to Louisville neighborhoods and history and helped him make contact with people who grew up alongside Ali in the Parklands neighborhood in the 1950s. He interviewed people like Bob Coleman (who now serves as a volunteer at the Ali Center) and Gordon Brown (now President and CEO of the Home of the Innocents).

“What I learned from those interviews turned out to go beyond facts or factoids,” says Goodwin. “It gave me a sense of what it was like to be a young person in Louisville in that time – and how exciting it must have been to be a young black kid right at the precipice of the Civil Rights movement.”

In some ways, those interviews really shaped the nature of the play, says Goodwin. “It is a coming of age play,” he says.
“There are people who played a role in Clay’s life, and there are moments where boxing helps Clay realize things about himself and who we wants to be, about his sense of responsibility.”

But Goodwin, who grew up in the Detroit suburbs, said it also came to be a play about community. “In a way, it became sort of a tribute to my parents and their generation, and the way they talked about their lives and growing up during that period of African-American migration when a generation of people were moving north to look for jobs and to get away from Jim Crow and segregation and the Klan.”

The stories he heard about Louisville, said Goodwin, were much like those his parents told about Detroit.  “It seemed very familiar to me. People moved to these cities and they formed neighborhoods that became extensions of the Southern communities they had left behind. Moms knew one another and looked after each other’s kids. Dads were around. It was a period before the Vietnam War, before the heroin epidemic and the crack epidemic. There may have been clearly defined lines of segregation in Louisville, but there was also a healthy, self-sustaining blue-collar black economy.”

Goodwin is careful not to romanticize the period. “It wasn’t perfect,” he says. “But it was a time when the community seemed just a bit more conscious of itself, a bit healthier. And as I was talking to people I came to realize this is really a play about how a city and a community produced this young man and sent him on his journey. As a playwright, it was an exciting way for me to put myself in that time period and imagine walking in the shoes of this great person.”

Writing about Ali, says Goodwin, also filled him with a great sense of responsibility. “I think about all the years I spent being a bad playwright and learning how to do this.  I just thank God this chance came when I feel like I know how to do it.”

“And In This Corner … Cassius Clay” features Chicago-based actor Justin Cornwell in the title role. It’s a homecoming performance for a young actor, who has already earned a few TV and movie credits. He’s an Eastern High School graduate and former University of Louisville theater student.

The play opens with a gala premiere on Jan. 17. The production then continues with evening performances through Feb. 14.