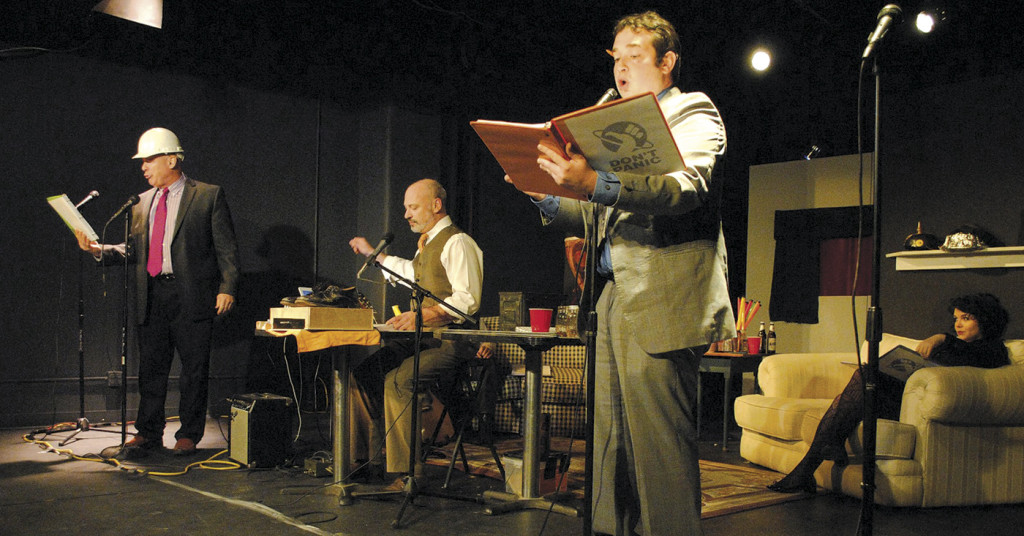 'Hitchhiker's Guide to the Galaxy'

This season, both of Louisville’s Spanish language theater companies — Teatro Tercera Llamada and El Delirio Producciones — have staged works by Ott. And based on that small sample of the prolific playwright’s work, it’s clear that Ott has an all-encompassing imagination that thrives on that sort of freedom.

Last fall, Teatro Tercera Llamada staged Ott’s “Monstruos en el Closet, Ogros Bajo la Cama” (“Monsters in the Closet, Ogres Under the Bed”), a harrowing drama that tells the story of the 9/11 attacks in the voices of the Twin Towers themselves. It was a sublime production, full of extraordinary imagery and ideas.

Last week, El Delirio opened Ott’s “Divorciadas, Evengelicas y Vegetarianas (“Divorcees, Evangelists, and Vegetarians”) at the Bard’s Town. This, too, is a brilliant production – and it’s staged with English supertitles for those of us whose Spanish isn’t facile enough to keep up with the rapid-fire energy of this cast of three.

The action starts on a noisy Metro platform (kudos to Gabriela Castillo, very effective lights and sound), where brassy, vampish, narcissistic Gloria (Angie Williams) is furiously complaining about her current boyfriend’s neglect of her rather considerable needs to a hapless fellow traveler, Beatriz (Clarena Francis). Gloria is a flamboyantly raunchy expert on the nuances of male misbehavior (and on the benefits of a meat-free diet). And she barely notices that Beatriz is a shy retiring type. In fact, she takes such slight notice of Beatriz that even after long acquaintance, she continues to garble her companion’s name in ways that grow increasingly outlandish as the play proceeds.

And as the play proceeds, we learn that much of Gloria’s world view has been shaped by her droll obsession with Kim Basinger’s character in the movie “9 ½ Weeks.” As the serious Beatriz pushes back against Gloria’s profanity, Ott weaves a fine comic clash of values that culminates in a startling moment (no spoilers here) where Gloria actually notices something beyond herself — something that adds a sober note to the rest of the play.

But for Ott, that sober note never impedes the comedy.  Soon Gloria and Beatriz are joined by Paco (Guillermo Solano), a devoutly religious usher at a movie house where he often is forced to usher with eyes shut in order not to see the sinful sights on the screen (where it seems “9 ½ Weeks” is playing). In Ott’s original script, “Paco” is actually a woman named “Meche,” — but no matter, Solano’s portrayal of a paradoxically sexless and sex-obsessed evangelist is brilliantly pitched, especially when Paco turns on his evangelical energies, starts speaking in tongues, and tries to exorcise the demons he thinks have taken control of Beatriz — who seems also to have learned a few things from Basinger.

It’s a flat-out funny script, and the performers revel in the verbal pyrotechnics and the physicality of Ott’s comedy. But there’s more to it than that. It turns out that besides writing plays, Ott also translates English language plays into Spanish — and one of the folks he’s translated is David Mamet — and like Mamet, Ott is one of those thinkers who searches for deep ideas in earthy images.
Some of last week’s performances were sold out, so it’s wise to call ahead for reservations.

Last fall at Walden Theatre’s Slant Festival, this production won the “Audience Award.” Alas, I didn’t see it at the Festival – but I did see it last week. In an email, Doug Schutte, the company’s Executive Artistic Director, indicated that the production will likely be dropped from the repertory.

That, I think, would be a shame. Created and performed by company members Beth Tantanella, Ebony Jordan, Cara McHugh and Jake Beamer, this Oedipus, which ran last weekend with a 10:30 curtain, is pretty much the perfect late-night entertainment. In Sophocles’ tragedy, the story of Oedipus is a deep reflection on the workings of fate. The Bard’s Town parody is more akin to the comedies of Aristophanes and Plautus. It’s a riotous mix of crowd-sourced decision-making and drinking game. Whenever the characters find themselves at the crossroads of destiny, the audience gets to make the call and see how things play out. And whenever the word “mother***er” is spoken, the audience is invited to raise a glass.

When I described this to a friend, he said, “It sounds like improv.” It might sound like it — but it’s not. This was a finely honed comedic performance. As smart and witty as could be. Hey, besides the original characters from Sophocles’ version, it also included astute analysis from none other than Sigmund Freud himself.

If you’re a fan of The Bard’s Town Theatre, you’ve likely seen the company’s perennial Elvis-infused holiday production, “Kings of Christmas.” “Oedipus” is of the same high quality. My plea: Save “Oedipus Rex: The Real Motherf***re” from the fate of obscurity. Tell the folks at Bard’s Town that Oedipus deserves a return engagement.

“Hitchhiker’s Guide to the Galaxy” at The Alley
One last note: The Alley Theater is in the middle of a two-weekend run of the first two parts of the original BBC Radio version of “Hitchhiker’s Guide to the Galaxy,” which is, of course, the original source material for HG2G. These segments — which find Ford Prefect (John Aurelius) rescuing Arthur Dent (Dennis Griner) just before Planet Earth is destroyed to make way for what amounts to an interstellar highway (think bridges project?), then being plunged into deep space before being rescued by Zaphod Beeblebrox (Scott Davis) and Trillian (China Hepburn) while calm radio host Joey Arena narrates the action — are more amuse-bouche than entrée, but you ought to go just to see Tom Dunbar shapeshifting Teutonic Vobon poet-commander to Marvin, depressed, paranoid android. Catch the 7:30 curtain, and you can easily be back on the town for dinner or some other entertainment afterward.