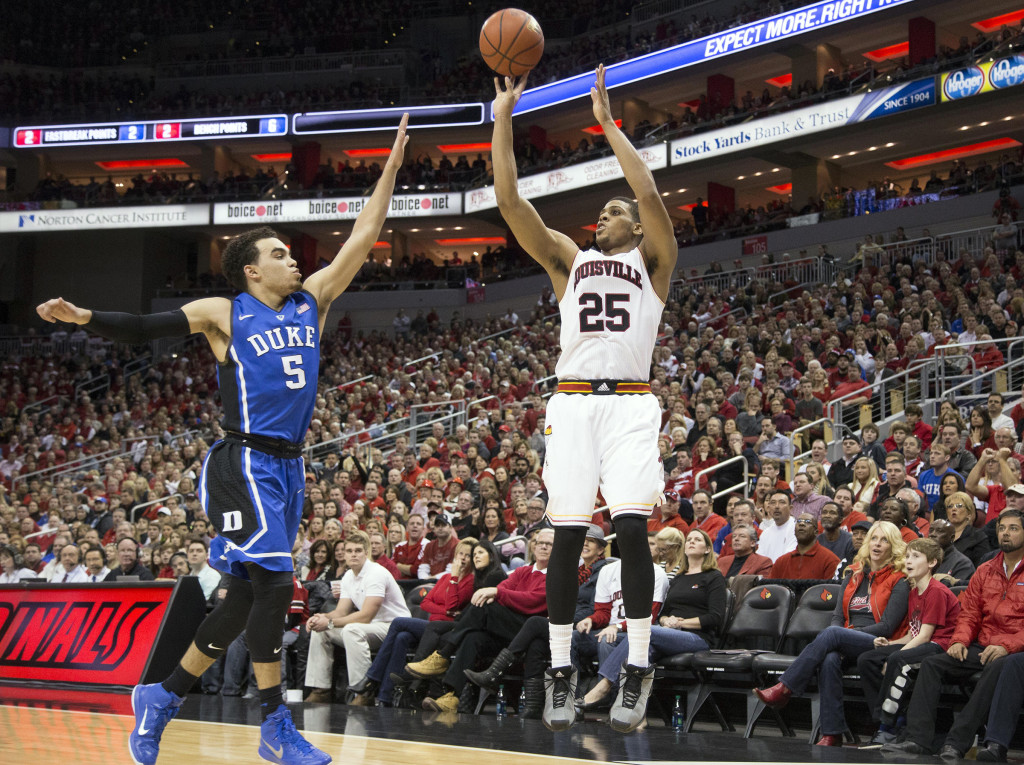 After a recent loss to Duke, in which his team sank just 18 of 67 shots, Louisville coach Rick Pitino said it is obvious his team is “offensively challenged.” And has been from the start. “We’re not Gonzaga, or one of these high-scoring teams.”

But why can’t Louisville be more like Gonzaga, which fills up the basket with made shots — not misses?

Looking at the rosters of the two teams over the years, most everyone would agree Louisville has had more premier players — and far more success in the NCAA tournament. There are no National Championship banners hanging from the rafters of Gonzaga’s McCarthy Athletic Center, in Spokane, Wash., as there are three in Louisville’s Yum! Center.  On the other hand, third-ranked Gonzaga  (21-1), coached by Mark Few, has been one of winningest teams in college basketball for some years now – long enough to forge a stylish identity: The Zags (a.k.a. Bulldogs) live to shoot and love to score.

Louisville (17-3), by contrast, seems most interested in keeping others from scoring. And that’s worked well for Pitino and Louisville. But a gap in recruiting shooters has caught up with the Cards in 2015. It’s probably the reason Louisville ranks as a Top-25 team (currently No. 10), rather than a championship contender. Can’t shoot. The Cardinals are very good at defense, play team ball, rebound pretty well, eat their Wheaties, help old ladies across the street, block shots … but can’t shoot.

How bad is it?

This season Louisville has hit 485 of 1111 shots, or 44 percent. That’s not pathetic, but it sure isn’t good. Things are worse from the three-point line, where U of L has connected on just 117 of 389 three-point attempts, for 30 percent, which IS pathetic. By contrast, Gonzaga hits 53 percent from the field, and drops 40 percent of threes. That’s 53 and 40, compared to Louisville’s 44 and 30. A huge difference.

A look at the Gonzaga roster shows its leading scorer is 6-10 junior Kyle Wiltjer, of Portland, Ore., a transfer from Kentucky averaging 15 points a game. Wiltjer shoots from everywhere — because that’s what shooters do: 54 percent from the field, 43 percent of threes. Down the bench, incidentally, is senior substitute Angel Nunez, a former Louisville player, from Washington Heights, NY. Nunez is averaging just 3.8 points, but has hit 60 percent of his shots (23 of 40). Useful.

The primary difference seems to be the three-point shot. Pitino, who pioneered the three in college basketball, says his team’s three-point shooters would be helped if Louisville’s inside game were more potent. He’s probably right about that. But, conversely, the Cardinals’ inside game might be enhanced if its three-point shooters could throw the ball into the Ohio River without clanking it off a bridge. It is demoralizing to see opponents leave certain Louisville players open at the end of the games because they don’t think they’ll hit a three to beat them.

Of course, just when we pronounce Louisville as struggling, the Cardinals rebounded from the Duke defeat to singe Pittsburgh 80-68 Sunday afternoon with 65 percent shooting — including 50 percent from three-point land. Terry Rosier, Chris Jones and Montrezl Harrell dominated the game. So we’ll see.

Even when Louisville was winning its most recent championship in 2013, it wasn’t like fielded a squad of sharpshooters. It’s inside players — notably Chane Behanan and Gorgui Dieng, got themselves open and sank a high percentage of close-to-the-basket shots — or deftly handed the ball along to an open teammate, such as then-freshman Montrezl Harrell. Russ Smith thrived as a hot, confident shooter, and Luke Hancock, while not really a deadeye, proved clutch. But that was about it. The rest of those Cardinals took their cue from Peyton Siva, and played defense — and it all worked.

The year before, the 2012 U of L team was more like this one, a bunch of guys peering through Mr. Magoo glasses. That team won on guts, and the old college try.

Anyhow, we imagine Louisville is far from done this season. Historians will note Pitino’s teams always hit a few craters in the parkway in January. But then — instead of the world coming to an end — the Cardinals rebound with a stirring stretch run. Don’t you just love college basketball?