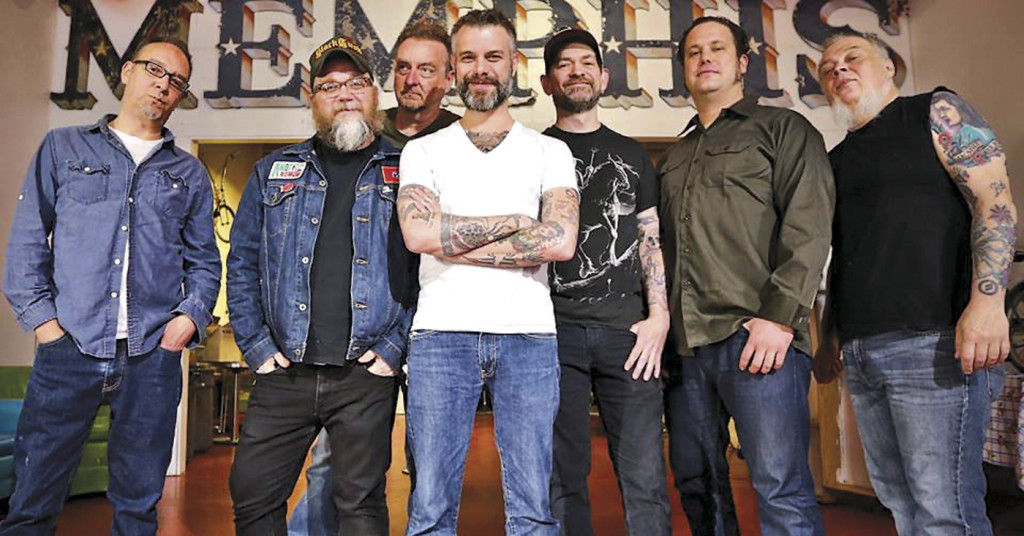 Lucero is one of the most-respected and resilient bands in indie rock right now. In their 17 years together, they have released 10 studio albums or EPs, while becoming one of the most thrilling live shows on the road. Formed by a group of guys who grew up submerged in the underground punk rock scene, then, along the way, began to soak up their hometown of Memphis’ own soulful and rich musical history (the home of Sun Studios, Stax Records, and Elvis Presley), Lucero somewhat surprisingly has become best known for their earthy country-leaning music. “When we started, we wanted to be Tom Waits, The Replacements and The Pogues,” Lucero guitarist Brian Venable tells me of the early days. “And then one day you’re listening to something you did and you’re like: ‘Crap! We’re part of this crazy Memphis lexicon of music.’ We’re in pretty heavy company.”

Louisville was an early supporter of the alt-country/Americana music scene, which Lucero was and continues to be very closely connected to. “Louisville is a special place for us,” Venable says. “It was our number one city for a lot of years. That’s where [Lucero concert staple] beer throwing got created, in Louisville. I think it was a show at Uncle Pleasant’s; they were all shaking their beers like they were shaking their fists and then all of the sudden we were covered in beer.” Louisville embraced the burgeoning alt-country scene and was an early haven in tour routing for lots of then up-and-coming artists – like Drive-by Truckers, Ryan Adams, Justin Townes Earle and Hank Williams III – because there were plenty of bars scattered around town looking to book original music that felt rooted in the dirt of American music.

Over the years, the band stuck through hard times because they decided breaking up wasn’t an option. “We know, even when we fight, that we aren’t breaking up,” Venable tells me. “That’s the biggest thing; a lot of bands just break-up. One of us might be like, ‘You’re an asshole’ – but then it’s just like: ‘Do you see what we have going on here…just deal with it.’” By 2004, that diligence paid off and the band stepped out on their own with their fourth album, “Nobody’s Darlings,” by starting the record label, Liberty & Lament Records.

“Nobody’s Darlings” was the band’s statement piece, confidently introducing Lucero to the national spotlight. The title track is a beautiful, close-down-the-honky-tonks moment of introspection that inadvertently played as a first-person indictment of our inebriated, self-indulged generation of misanthropes.

“At the time that song summed up everything for us,” Venable recalls of writing the title track. “It’s what we were feelin’, I guess. We were getting stuck with a lot of these young Warped-Tour-type bands – and they were all like 19 or 22, and here we were like…30. And it was kinda like fuck, we started too late.”

After the release of “Nobody’s Darlings” in 2005, the band became a live draw in bars, clubs and music festivals all over the country. Maintaining a schedule they still have, which keeps them on the road more than 200 days a year, with the members making time for the people who come out to see them after every show. It’s that kind of dedication that has built an astounding level of loyalty among the band’s fans. “It wasn’t planned; we all just grew up punk rock kids,” Venable says. “I never went to see shows where I didn’t hang out with the band afterward.”

As far as the future of the band goes — they haven’t released a full studio album since 2012’s “Women & Work” — Venable assures me they’re currently working on demos and will be heading into the studio in April. But that doesn’t mean they’ve been stagnant either — they continue to maintain 200 days a year on the road, released a stripped-down, mostly acoustic EP, “Texas & Tennessee,” in 2013 and a live album [“Live From Atlanta”] in 2014.

When asked about what the younger, punk rock versions of themselves would think of Lucero’s music today, Venable chuckles: “You know what? They can go fuck themselves; we write what we write. We were just a bunch of punk rock kids trying to be cool, and then one day you start to play better and you go, ‘Man, you know what’s really cool? Huey Lewis. You know who’s cool? Tom Petty.’”