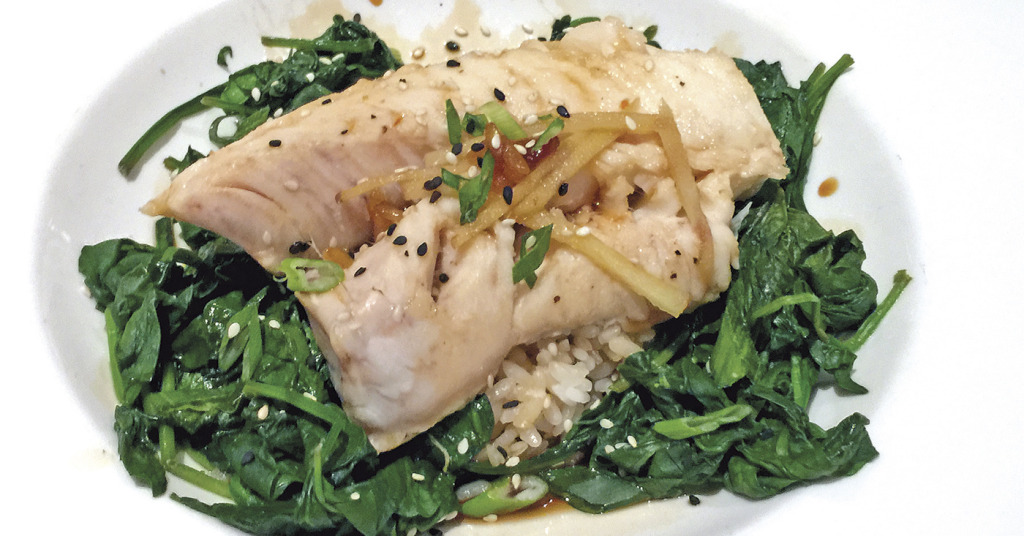 Here’s one reason why I don’t often review corporate chain eateries: They’re generally predictable. Even the good ones don’t change much, unless the stockholders scream for change, and nothing good generally comes of that.

Take Mitchell’s Fish Market: I last reviewed it in November 2001, when it and its then-corporate partner Martini Italian Bistro had just arrived as anchor restaurants at the new Summit shopping center (now called “Paddock Shops”). Both restaurants were pretty good, so I made the trek, checked them out and said nice things about them.

Now 13 years have passed — wow, how did that happen? Why not take a fresh look? And how about that! Not much has changed.
Mitchell’s is still an attractive destination. Its bland suburban “power center” surroundings still give way to an interior that’s a fair replica of an upscale seaside eatery, with a glass-enclosed retail fish counter on one side of the dining room. Even the pricing doesn’t seem to have escalated beyond reason, with a cod dish that was $14.50 in 2001 going for $17.49 last week.

Mitchell’s claims “the best seafood available, delivered daily.” That’s no difficult chore in Louisville, which despite our inland location has been a seafood-loving town ever since the Civil War, when the L&N used to rush Gulf fish, shrimp and oysters north on express cars filled with seafood and ice.

Now our major UPS hub puts the icing on the (fish) cake. Any seafood restaurant that cares to do so can boast snapping fresh fish. (And, it goes without saying, any seafood restaurant that doesn’t care about fresh fish doesn’t deserve your business, or mine.)
On the business side, however, things have changed, and more changes are in “shore.” Cameron Mitchell, the Columbus-based mini-chain that brought the restaurants here, didn’t last long. It soon turned over the Martini property to its local operators as an indie operation. Then Cameron Mitchell, with its Mitchell’s Fish Markets, was sold to the Ruth’s Chris Hospitality Group in 2008.

This didn’t sound promising. Still, Mitchell’s remains locally popular, and seafood is healthy and good, so I wasn’t shy about dropping in for dinner with friends.

The verdict? It’s not bad. The seafood and fish passed our taste test for freshness, service was fine and pricing is competitive. If it doesn’t rise to a four-star level of excellence, well, few chain eateries and only a handful of locals do.

Speaking of booze service, we started our evening with adult beverages — an orange citrus mojito with freshly squeezed OJ ($8.95) and a cucumber gin collins ($8.95), the latter made light on the Beefeater at Mary’s request. My mojito seemed weak, too, although I did not request it that way, but hey, the orange, lime and mint flavors worked nicely with the light rum.

Thai chopped salad ($6.29) made an exceptional starter. A bowl of fresh shredded lettuce and nappa cabbage and colorful carrot, red-pepper and onion julienne was generously dressed with an appetizing sweet-hot sesame-peanut vinaigrette that prompted me to clean the plate.

“Market Catch” dishes at Mitchell work this way: Pick one from a choice of eight fresh seafood and fish options that range in price from $17.49 (for Atlantic cod from the Barents Sea) to $31.99 (for certified-sustainable Chilean sea bass); then match it with any of six preparation styles, from simple grilled, broiled or blackened to fancier options such as “island jerk,” “hoisin barbecue” or “cedar plank.”

The cod was perfectly cooked in our choice of Mitchell’s “Shang Hai” style, steamed with ginger and scallion, flaky and tender, with a fresh mild cod flavor. It was served on sticky rice and fresh sesame-scented spinach, but we lost our enthusiasm in an overly sweet soy-citrus ponzu sauce that brought more sugar to the dish than I like in any course except maybe dessert. The spinach, too, included some wilted slimy bits that suggested bagged greens were carelessly tossed into the pan without checking.

On the side, smashed red potatoes were extremely good; grilled asparagus was simple and fresh, barely-cooked crisp.

Another Atlantic cod dish, British fish & chips ($16.99) was just about perfect. The dish might sound a bit downscale for a fancy eatery, but the proof was in the preparation and flavor. “I don’t think we’re at Long John Silver’s any more, Toto.”

Desserts were rich and filling. A mini sharkfin pie ($5.29) contained all the basic food groups that I love: Chocolate fudge ice cream, peanut butter, Oreo crust and honey-roasted peanuts! What’s not to like? Seven-layer carrot cake ($8.99) was a towering creation, a ziggurat of carrot cake so tall that you almost had to stand up to eat it.

Our share of dinner for two, including two cocktails, came to a very reasonable $62.45, and properly attentive, friendly but not intrusive service earned a $15 tip.