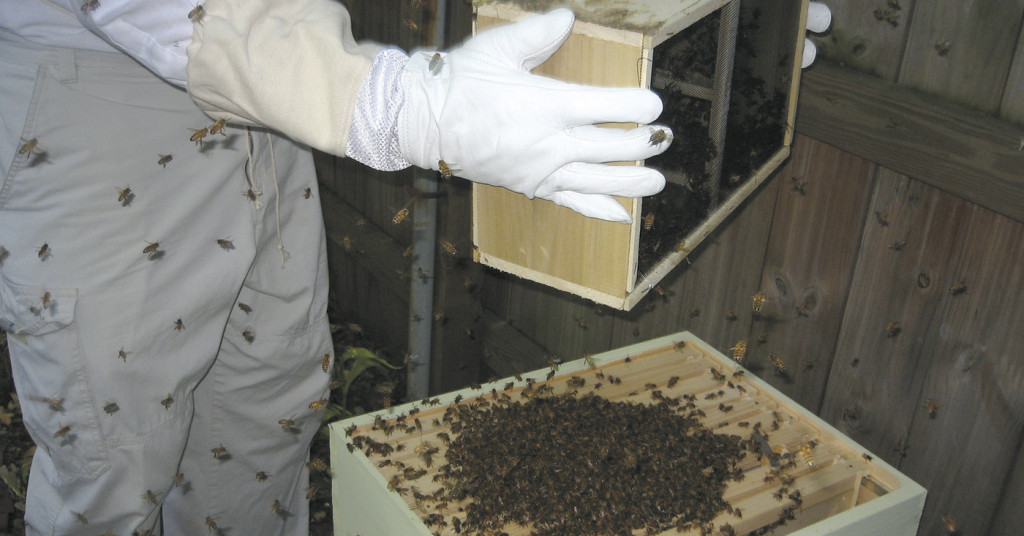 Louisville’s empowering urban farming laws allow citizens to transform their quirky hobbies into mainstream small businesses. But, participating in the local food movement, with the desire to share the fruits of our hobbies with neighbors, comes with practical risk.

Matt Fontaine took a gamble in 2009 when he launched Louisville Honey Company with his wife. “I took a beekeeping class in college because I thought it was interesting,” says Fontaine. “Then I had a friend keeping bees in the Highlands, so my wife and I bought equipment and got started.” Bypassing hobby status, they set up a part-time business right away.

Fontaine’s honeybees flew up to two miles from their hives to pollinate flowers at the U of L campus, in Cave Hill Cemetery and in the urban gardens of Old Louisville. The honey Fontaine harvested through 2013 was a true taste of the hyper-local landscape surrounding the hives.

What Fontaine never planned for was that his honey business might fail.

“We were a very small shop, always having between 1 and 4 hives that were kind of active,” says Fontaine. “We would always sell out every season and that was always a problem. The demand far exceeded the supply of local, natural honey.”

The cause of CCD isn’t clearly understood. Some experts link the disorder to pesticides—neonicotinoids that are similar to nicotine. The neuro-active nature of the pesticides is thought to confuse the majority of the worker bees from finding their way back to the hive. The odd phenomenon causes the bees to simply abandon the queen.

The USDA and EPA cite Varroa mite infestation, decreased genetic diversity from bee breeding, reduced quality of forage (food sources) and poor management of pesticide use by food growers as contributors to bee collapse in the United States.

“When the bees died out in spring, we decided to take some time off and focus on some other projects, and so I thought, ‘I’ve got all this equipment. Maybe there’s someone who wants to put a little bit more time into it,’ rather than just have it all sit on the shelf right now.” Louisville Honey Company is currently looking for a buyer.

Fontaine says that as recently as 2010, one would need a sizable inventory to sustain a retail store or to partner with distributors to help sell a product like honey. At that time, Louisville Honey Company found their success with local online sales. However, Fontaine says that the local food movement has come a long way in the last five years. “Nowadays you’d do a better job of finding someone to take 10 bottles without a commitment to use more,” he says.

Because supply isn’t meeting current demand for local honey, Fontaine offers advice for Louisville’s aspiring apiculturists. “Take advantage of Bluegrass Beekeeping School in Frankfort coming up in March. It’s very cheap to attend, and you learn so much in just 8 hours.”

“Get involved in a local beekeeping association, because the number of urban beekeepers is higher than anyone really realizes, in the Highlands, St. Matthews and Downtown. Being connected to those people is invaluable,” says Fontaine.

Kentucky Proud offers marketing assistance to members, and the Kentucky Department of Agriculture offers free hive inspections for Kentucky beekeepers to help identify disease and pests that might harm the colony.

Neighbors can be hesitant about beekeepers in the neighborhood, “but the reality is they probably already have bees,” says Fontaine. “In general, they’re safe. They’re not going to come attack you. They’re out there looking for nectar and pollen. As long as you stay away from the hive, it’s a generally safe practice.”

Supporting urban honey producers means not only buying local honey from farmers markets and independent grocery stores, but it’s important to support the bees, too. One way is to allow spring’s first flowers to flourish, like dandelions and violets — bees wait for these all winter. Many garden favorites will attract bees to your garden, like sunflowers, lavender, marigolds, mint, rosemary and snapdragons; also, strawberries, green beans and tomatoes.

Fontaine says, “Plant some flowers, even if it’s just in a hanging basket. Diversity makes the honey better. People would ask if our honey was clover or poplar, but the answer is that it’s whatever’s-around-the-neighborhood honey, which I think is kind of exciting.”

Rachel Hurd Anger is a regular contributor to Urban Farm and Chickens magazines.