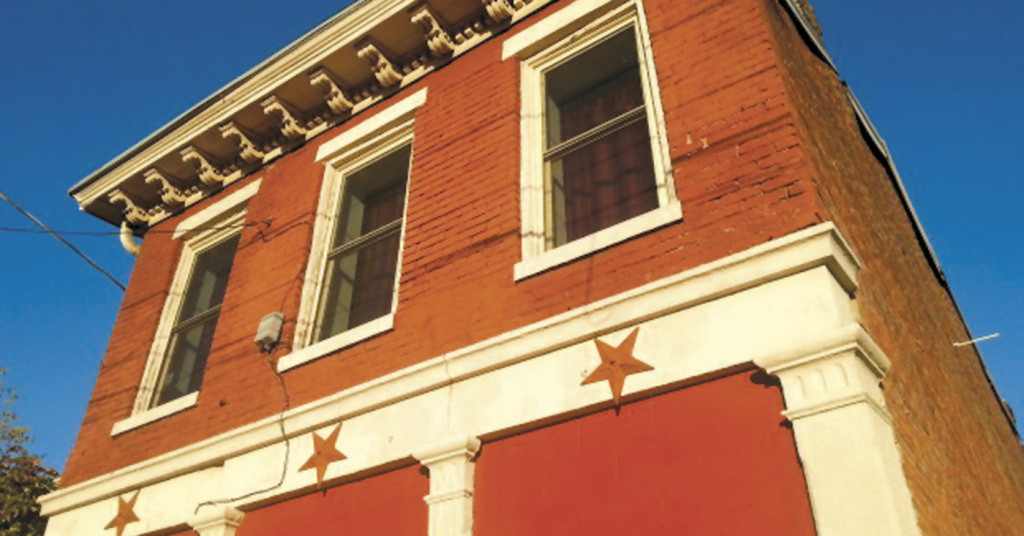 Every city has that spot — maybe a house, maybe a warehouse — where music and art just kind of happen, like a nexus for creativity that seems to occur organically. In the past, that’s been the Lava House, The Chestnut House, or the 540 — spaces that kind of bristle with energy — where anything seems possible, and anything might happen. Nestled quietly on northern Preston just south of Broadway, The Cathouse is poised to be that place. Again.

Just a few years ago, The Cathouse served as an occasional art-punk space, the sort of pop-up platform for shows that gave it an air of unpredictability. The walls were covered in graffiti and the temperature was kept cool to help keep everything affordable.
According to past and present tenant/housekeeper William Benton, “I came upon the building in 2007 or 2008, I think. I wanted to buy it but couldn’t at the time. Then, some time passed and it came up for rent and we began to have the occasional show there. Lucky Pineapple practiced and shot our music video for “Moment On an Empty Street” there. When I joined Phantom Family Halo we did a little recording there. So I’ve had a strange history with the place and, with it, an obsessive love. It feels as close to home as I can ever get.”

He continues, explaining that during his absence, “Brad from The Teeth had some shows there when he rented it so that legacy continued a bit following my departure.”
As to the name, well, Benton jokes, “The building itself once — how
should we say? — facilitated the world’s oldest profession. It was a cathouse of a different variety. Past that, I am a cat owner and it’s not completely lost on me that it is also the name of the legendary hair metal venue in Los Angeles. Watch ‘Decline of Western Civilization 2: The Metal Years’ for an education.”

A longtime music veteran, with a resume that includes Bodyhammer, Bonnie Prince Billy and the aforementioned Lucky Pineapple and Phantom Family Halo to name a few, Benton knows a thing or two about music, art and the scene that surrounds both. But Louisville can feel like a small town at times, and after some bumps in the road, Benton moved to NYC for a bit, serving time there first with Phantom Family Halo and later the talented Shilpa Ray. Still it wasn’t long before he felt the pull to return to his longtime home.
“It was a strange and wonderful sequence of events, mishaps and opportunities,” he says. “Most importantly, the landlord told me that a buyer had fallen through and that The Cathouse was available again. I had said that it would be the reason worth coming back for and that statement came back to haunt me in a good way.”

Benton adds: “The opportunity to return to The Cathouse arrived during a lull in activity. I was feeling a lot of frustrations over the general culture around music in New York: the expense, the constant preoccupation with words that creep me out. Image. Marketing. That stuff. There wasn’t and isn’t much going on that was interesting or inspiring to me. A more superstitious fellow might see that The Cathouse opening up when it did was meant to be. I have a wonderful and talented girlfriend who acts and sings and she was feeling the same about it all, too, so I was happy that she wanted to join me on the adventure. We were overjoyed to make the move and to be able to afford a place where we can rehearse, perform and such.”

The current plan is to keep things simple.

“The Cathouse has been vacant for over a year and a half so we are doing a lot of cleaning, some fixing, those sorts of things,” Benton says. “It’s just the expense of it all right now, since we are still job hunting on top of that. We moved here quickly and didn’t have time to save. It was now or possibly lose it to a buyer. And we should be clear that this isn’t a ‘venue’ per se, but an art space that we want to make available to friends and events that we want to support and facilitate.”

You can expect a variety of activity there though — music, theatre, art and even small movie screenings, as it allows.

“Naturally, we want to have musical performances,” Benton says. “My girlfriend has hosted play reading groups and produced some theater in New York on top of her acting, so she is the expert on making it right for those things that satellite the theatrical world. I want to show some of the Louisville live music videos that I have that have rarely been seen and invite others to do the same. We have talked about hosting art exhibitions as well. We’re still in that excitable brainstorming phase, having come off of the expensive and stifled New-York-Land amusement park ride.”

Benton draws a clear distinction between a house show and one held in a comparatively traditional venue.

“Just by measure of physical space it’s intimate — maybe 40 people occupancy max — but, yeah, you keep the events that you invite and accommodate to an appropriate size to make it comfortable for everybody involved,” he says. “As time goes by, places like The Cathouse take on personalities of their own. It makes me happy to hear people talk positively about the shows that they have seen there. It becomes a sentimental spot in that way. A tangible, physical link to past music and personalities. I feel that way about every performance space in every town though. I’m a softy that way.”

Benton has an equal passion — and the experience to back it — for what qualifies as a good or bad show, which he intends to apply that to The Cathouse.

“There’s a bit of what I said before about the venue: to channel something that transcends a room, building or any physical space into something else entirely by way of art or music,” he says. “To transform it into some other alternate universe of the creative spirit and mind. It’s great to have all of the utilities and a space you need for a performance but if you have a room that contains something bigger than that on a personal or communal level, people begin to care about it and that’s magic. It’s relative to when, where, what … all of the variables. Of course, as a performer, if you’re good you will make your setting work and maybe allow it to do something that could only translate in that particular location and moment.”

Check out it out for yourself this Saturday, January 24 as The Cathouse plays host to the Brian Foor album release show with Asm A Tik, and Cat Casual, Benton’s band.