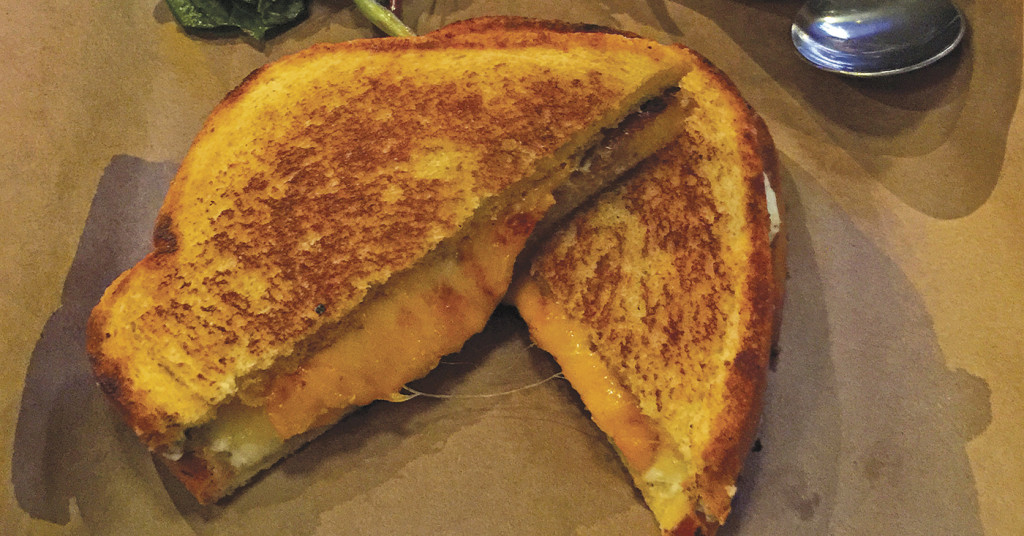 Remember the old joke about a hunter’s repeated efforts to bag a giant grizzly bear? It’s a little too long and risque to quote here in full, but it ends with the bear lovingly whispering, “You’re not really here for the hunting, are you, Bob?”

Craft House in Crescent Hill is kind of like that too. It’s a delightful neighborhood hangout; and with 40-plus draft beer selections made by a baker’s dozen local microbreweries, it ranks among the city’s top destinations for locavore suds. But I don’t think people really come for the food.

Although I admire its purported commitment to local and organic fare, I’m seeing Craft House as more a destination for beer. The fare is reliable, reasonably affordable, never awful but rarely exciting. It seems best suited to lay down a base for the beer: “Meh. Get me another pint.”

Don’t get me wrong. I like Craft House. It gives me the warm fuzzies to have such an amiable eatery within walking distance of my home, even if it has dramatically increased the difficulty of finding an evening parking space along that stretch of Frankfort.
I watched eagerly over the sumer as workers gutted the old Darkstar Tavern, opening up the lofty exposed-brick room from stem to stern and dropping in a beautiful new bar.

Close readers will recall that we dropped in for a quick preview on opening night a few months ago (LEO Weekly, Sept. 3, 2014) with similar, albeit preliminary findings: A Caesar salad was palatable; oyster hushpuppies looked like undersize versions of the iconic Louisville “rolled” oyster but were almost devoid of oyster flavor; an eggplant-based veggie burger was just okay.

Our more recent visit, after allowing a few months for the kitchen to hit its stride, yielded similar findings. The atmosphere was fine, the service exemplary, casual as you’d expect of a beer-based venue but right on point; and three beers hit the spot: a hoppy Louisville Lager from BBC Main and Clay, a hoppier Hoosier Daddy Crimson from NABC, and a mellow, malty Apocalpyse Creamation Cream Ale, all served in $3.25 half-pints so we could sample more variety.

Our food picks, though, repeated the earlier experience: Palatable, yes, but somehow lacking the soul that pushes first-rate cookery beyond the ordinary.

A griddled cheese sandwich ($7) certainly passed muster, and substantially surpassed the Woolworth’s lunch counter standard. Decent white bread was grilled crisp and appropriately greasy, stuffed with a molten mix of aged cheddar, cheese curds and garlicky Boursin cheese; yet the end product resembled everyday grocery-store sharp cheddar. Not that there’s anything wrong with that. A shallow oval dish contained only a puny ration of pale-orange, creamy tomato soup. “For dipping,” the server helpfully explained, which made sense, I guess.

Craft House pledges to support local farms and business and to use seasonal and organic ingredients “whenever possible.” Good for them. I’m going to be blunt, though: The grilled chicken breast used in the Coop d’Ville ($10) didn’t show us any of the texture or flavor we associate with locally raised, pastured bird. It could just as well have been Perdue’s finest, though perhaps this simply bespeaks the blandness of boneless, skinless white meat.

The chicken was topped with a thin slice of melted mild cheese, and served with a side of “crispy, seared” mushrooms that were neither. Did I say “meh”?

A shared side order of brussels sprouts was pretty good, halved and lightly dressed with brown butter; the menu also mentioned sage, although I couldn’t detect the savory herb.

Dinner for two, counting the three half-pints, came to an entirely reasonable $32.01, and our affable, courteous and properly attentive server Stephen pocketed a $7 tip.

Signs of the apocalypse: The White Castle veggie slider

I can’t resist mentioning this briefly, since my mini-report on the HotBytes forum and Facebook on New Year’s Day blew up with “Likes” and comments, hinting that there’s public interest in this bizarre development: White Castle, at least for a while, now offers a veggie burger, of all things. They’re only 99 cents each, cheap, but like their meatful siblings, it takes a few to satisfy an appetite.

The WC folks are using a commercial brand of veggie burger, Dr. Praeger’s, which proved to be a decent patty – round, not square – fashioned from a garden of veggies including corn, green peppers, celery, carrots, and some other stuff, I’m sure. Crispy on the outside, soft within, they’re slapped on a standard white slider bun and available with your choice of honey mustard, “Thai” or ranch sauce.

We tried them at the new St. Matthews WC Lounge and, well! It actually is a pretty good veggie burger. Don’t mistake it for a meat burger, just take it for what it is, and it’s okay. My advice, omit the sauce, which adds nothing. Ask for a couple of pickles, smear on the brown Dusseldorf mustard, and you’ve got an almost-healthy slider.

(Those who shun meat will be pleased to know that the veggie burgers are cooked on a separate grill and flipped with a green spatula, color-coded to segregate it from the carnivores’ tools.) •