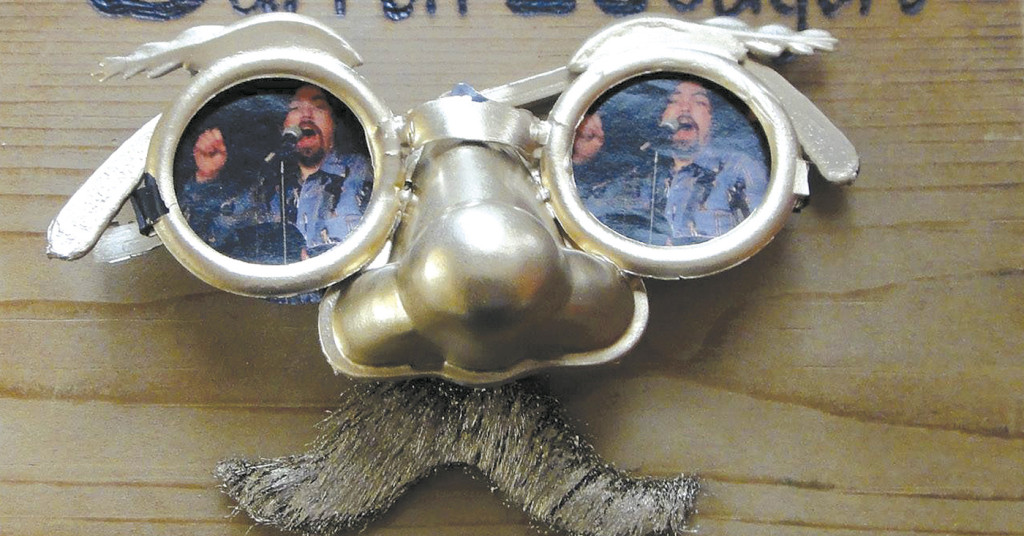 It’s officially award season! The Oscars, The Grammys and The Golden Globes will have overdressed celebrities, patting each other on the band and pointing out the year’s best in everything. Here in Louisville, Jake Reber will be handing out The Carneys (named after friend and local comedian Kent Carney), honoring the best in local stand-up comedy. This is the fourth year for the awards, and sadly the last year they will able to hold the event at Groucho’s, which will be closing its doors later this month. It’s a fact that strikes an emotional chord with Carney and Reber, considering The Carneys are an extension of a show that was born out of Groucho’s hallowed walls.
Both Reber and Carney met up with me at Groucho’s for this interview. When we first sat down, they lamented the pending close of their beloved homestead for a while. Of course comedians lament in their own way, by threatening to leave an “upper decker” in the bathroom for the next tenant, or mass ritual suicide with all of the other Groucho’s regulars (I’m 83% certain they were kidding about both). Finally, we were able to bring the conversation around to The Carneys.

Jake Reber: Can I have a beer before we start? Something sudsy and dumb … what’s the dumbest beer here?
Kent Carney: They could start a load of laundry and just scoop some detergent out for you.
JR: I’ll have Coors; that’s the definition of sudsy and dumb.
LEO: So let’s start at the beginning. What’s the genesis of The Carney Awards?
JR: In 2011, I lived just down the street from here, and I stopped in. Groucho was playing Sun Ra’s “Nuclear War,” and I said, ‘This is my place.’ I started hanging out here a lot, and we got to talking and Groucho told me he wanted to have a comedy show in here. And that was the beginning of our Sunday night show ‘Comedy Attack!’ A year later, to mark the anniversary of doing ‘Comedy Attack!’ I wanted to do something dumb and exploitative, and what’s dumber and more exploitative than an award show?
KC: I think the reason it was called the Carney Awards initially was to make fun of me. Because when I first started doing comedy, within the first year I won The LEO’s Reader’s Choice ‘Best Comedian’ …
JR: Twice … two years in a row.
KC: Which was a travesty. There was no reason for me to have won it besides I had a bunch of people I knew from theater and stuff that were just really excited that I was doing comedy. Because I’m not the best comedian now, and I’m way funnier now than I was then. So, me winning “Best Comedian” right out of the gate and the ridiculousness of it was kind of the impetus for the name.
LEO: How did the other local comedians take to the idea?
KC: Yeah, it’s funny. Comedians are generally a jealous, insecure bunch people.
JR: People is being generous.
KC: Yeah, we’re blobs of hatred.
JR: They’re living trolls. We did do the first (Carneys) right around the time Kent won “The Reader’s Choice” for the second time. So comedians were walking around, rolling their eyes going: “Yeah, yeah I wonder if anyone else is ever going to win?” But they’ve become a lot more fun to do over the years, especially once Will Hardesty started hosting them.
KC: He will host the shit out of anything!
LEO: I imagine the award being like an Oscar … a nude sculpture of Kent dipped in brass or bronze or something.
KC: I appreciate that you imagine that…
JR: It’s a pair of Groucho Marx glasses with Kent’s picture in the lenses.
LEO: I think it’s funny that the same four women get nominated for ‘Best Female Comedians’ every year.
JR: You can’t blame me that there aren’t more women comedians performing around town. I can’t force anyone to go onstage and call themselves a comedian at gun point.
KC: At first I thought, ‘Yeah, it sucks that it gets pulled from the same pool of people.’ But I’ve decided now it’s ironic commentary on the sexism in Hollywood. That’s a great way to protect your own sexism, call it ironic social commentary … I recommend it.
LEO: Has Kent Carney ever won a Carney?
KC: No, and I feel like that’s a major oversight.
JR: I don’t (chuckles).
LEO: Who chooses the winners?
KC: (Laughs loudly)
JR: Everything is decided upon by a shadow council of comedy elders, that numbers maybe as many as hundreds and as a few as none. Some people don’t even know they’re on the shadow council. And I’ve never won a Carney either, I’d like to point out … it would be like Vince McMahon putting the title belt on himself.