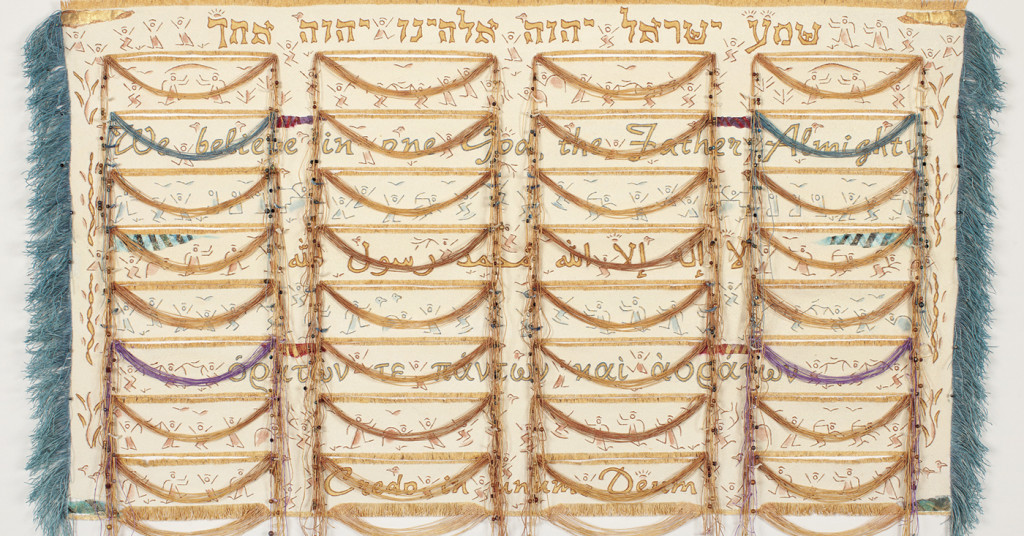 God has filled them with skill to do every sort of work done by an engraver or by a designer or by an embroiderer in blue and purple and scarlet yarns and fine twined linen or by a weaver, by any sort of workman or skilled designer. —Exodus 35:35

Art used as a spiritual messenger has been around as long as there has been the need to worship. Religious architecture is the star, of course, but it’s the smaller objects that seem to pack the most emotional punch.

The power in the textiles Laurie Wohl creates lies in their beauty and message. Her exhibition “Birds of Longing: Exile and Memory” reminds us once again of the similarity between the religions of Christianity, Judaism and Islam.

Her contemporary pieces seem as old as the religions themselves. Wohl calls her textile works “unweavings,” with each consisting of calligraphy on canvas or paper covered with woven and unwoven yarns. The work is accompanied by the poetry or spiritual text that inspired it as well as audio readings in English, Arabic and Hebrew.

“The words with each piece and the unwoven form that suggests these words serve as visual interpretations of various Biblical texts,” Wohl explains. “The unwoven spaces form symbolic shapes, [such as] wings, ladders, prayer shawls … and the sacred architecture of windows, domes and gates. … By unweaving the fabric I make manifest what is hidden within the material — liberating the threads to create shape, then ‘reweaving’ through color, texture and text. The narrative emerges from the juxtaposition of images within the surface, from the texts I choose, and from the combination of color, texture and pattern which convey a sense of time and place. And the pieces become carriers of my individual and our collective memories through the spiritual narratives they transmit.”

Good examples of her unweaving technique are shown in “Jerusalem” and “Watchwords.” In both, Wohl loops or hangs loose threads over the calligraphy. Colors range from glistening gold to royal purples, adding a richness reminiscent of the colors found in illuminated manuscripts.

There’s a real sense of architectural space in some of her work, especially in “Secret of My Secret: Veil of Light.” The cloth strips, strings and beads hang from a concave wire jutting out towards the viewer. This large work refers to the Persian verse (in part), “O Secret of my secret, so subtle, thou art veiled.”

Two additional shows are also at the Patio Gallery, Terry Taylor’s “A Pilgrim Lens” and a small collection of Peace Postcards. Taylor, executive director of Interfaith Paths to Peace, has photographed many of his “sometimes sacred, sometimes secular, spiritual journeys around the [United States] and around the world.” The Peace Postcards are a public art project started in 2009 by Louisville peace activist and lawyer Allan Weiss. Based on the premise “What does peace look like to you?” the postcards from 25 countries now number over 20,000. •