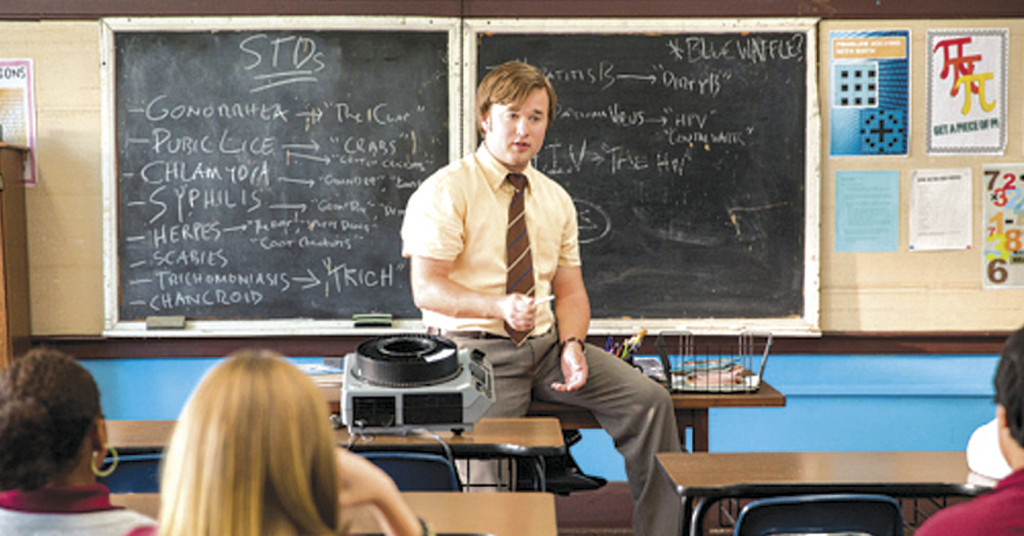 SEX[ED]: THE MOVIE
2014; $24.95; UR
A fun, funny and very enlightened doc on how we all got so screwed up. America’s first attempts at teaching each other about sex began in the early 1900s, though it wasn’t so much a social education as socially-acceptable misinformation. Since that day we really haven’t improved much, with much of the nation clearly wishing the rest would just shut up and go away. The highlights here, of course, are the many wonderfully clumsy sex-ed films once shown to confused highschoolers. These provided little useful information but succeeded brilliantly in pissing off parents coast to coast. As entertaining, erudite and affectionate a 77-minute span as we’ve ever spent. Recommended.

TRICKED
2015; $27.98; UR
An horrific, Swiss-made doc on the sex slavery taking place every minute of every day right here in our country – probably on your very street. Uncounted thousands of drug-addicted victims, mostly women and children, are driven into cities like cattle and forced to have sex with strangers to fatten the wallets of their subhuman pimps. Eventually these wretched souls will either be killed, abandoned or sold to another trafficker. Procurers make an estimated $3 billion annually, while the cost in terms of disease, violence, misery and the dehumanization of our species is incalculable. Rough, but should be required viewing in elementary schools.
Other DVDs of Interest

ANZAC GIRLS
2014; $49.98; UR
Another of those brilliant historical dramas that the Australians do so well. The Anzac “girls” were fresh-faced neophyte Aussie/New Zealand nurses who volunteered to serve in WWI. Dropped unprepared into a tidal wave of misery after the Gallipoli Campaign of 1915, they faced literal train-loads of dead, dismembered bodies — and wounded who were in nearly the same state — yet through it all they served with bravery and compassion. Based on actual accounts and period correspondence, this follows five of the “girls” as they endure hell, find love and forge a sense of family among their coworkers. Outstanding TV.

COFFEE TOWN
2013; $9.98; R
This comic tale of modern life in a locally-owned coffee shop, the unofficial office of a freeloading webgeek, is one of the few laugh-out-loud funnyflicks we’ve seen lately. When a corporate bistro chain makes an offer on the property, Glenn Howerton, Steve Little and Ben Schwartz try to make their neighborhood less inviting by starting a tiny crime spree. It doesn’t go well, but any excuse to see Adrianne “The Next Wonder Woman” Palicki, is worth our time. Josh Groban and Jake Johnson are among the hip cameos. The “R” rating is bogus.

DRACULA UNTOLD
2014; $34.98; PG-13
Luke “The Hobbit” Evans costars behind “Big Budget Digital Effects” and “Cast Of CGI Thousands” as the misunderstood monarch, Vlad The Impaler, a man who would sell his soul in return for the power to expel merciless invaders forever from his lands. He was, apparently, an early Democrat. Charles Dance from “Game of Thrones” makes a nicely icky Master Vampire, while Sarah Gadon provides little besides blonde winsomeness as his plot-driving bride, Mirena. A dark, fun little comicbooker which could have been so much more. Still, talks continue on doing a lesser-budgeted sequel.

LEVIATHAN: THE LAST DEFENSE
2013; $59.98-69.98; UR
An anime based on the hit Japanese mobile game, “Absolute Defense Leviathan”, centered around the adventures of Leviathan, a water mage — a magical dragon-girl with blue hair — searching for her lost brother. She and her friends struggle to work as a team while ridding their sylvan world of the evil Toripu. Suitable for kids or adults, their sporadic battles are more mystical than violent, with no blood or fan service to speak of other than Lev’s ample and well-defined bosom, occasionally used for comic effect.

THE BOB NEWHART SHOW: SEASONS 5 & 6
1976; $17.98-24.98 ea.; UR
The inimitable Newhart is the soft-spoken Chicago psychiatrist with an office full of veteran nut-jobs and a home decorated with gorgeous, fiery Suzanne Pleshette in this, arguably the greatest sitcom ever made. This week we offer the show’s final two seasons, never before available individually on home video (though a complete-series box set came out in May of 2014 which can still be found for about $90), highlighted by the rare appearance of Tom Poston — handyman George Utley on Newhart’s next show, “Bob” — as The Peeper, Newhart’s old college bud. Terrific TV.

THE DISAPPEARANCE OF ELEANOR RIGBY
2014; $29.98-34.98; R
Originally there were two films, often referred to has “HIM” and “HER”, telling the tale of married couple Jessica Chastain and James McAvoy from their two different perspectives. Writer/Director Ned Benson then recut these two versions into this single one (sometimes called “THEM”) for the Cannes Film Festival and ultimately a wider release. Once happily married they are now all but strangers after a tragedy destroys their perfect world. Now the two must either deal with the pain that the other’s presence causes, or walk away and lose their one chance at ever again being whole. Simply put: One of the best films you will ever see.

WORLD MADE STRAIGHT
2015; $19.98-22.98; R
Jeremy “War Horse” Irvine and former child-star Haley Joel “I See Dead People” Osment are young men trapped in the poverty and violence of a small, muddy Appalachian mining town, the scene of a Civil War massacre a century earlier. And it is this massacre, recorded in an old journal, which drives the modern-day conflict, goaded along by the town’s drug-dealing former teacher Noah “ER” Wyle and his coked-up girlfriend, Minka “Almost Human” Kelly (so incredibly beautiful that she nearly derails the movie). It’s no “Winter’s Bone,” but worth your time.

Apparently, Netherlands TV is a tad more progressive than ‘Merican TV (surprise, surprise), particularly with respect to young-teen Gay romance. Here, Dutch superstar Gijs Blom falls for his relay-race partner, Ko Zandvliet, in a tender, summer-long courtship while they train for a race of national importance. More importantly, this hesitant first romance is presented with all the tenderness and – dare we say it?! – wholesomeness, that you’d expect in any young-love tale. Lotte Razoux Schultz is wonderful as the obligatory girlfriend. Recommended.

This documentary look at the video game industry, past and present, is a hoot, being the brainchild of Zack “Scrubs” Braff, but the real reason we’re mentioning it today is the appearance of local-lad Chris Hardwick. Born in Louisville in 1971 “The Big C” was an over-the-top party animal who attended UCLA before becoming an icon in the VG world as a voice-artist and roving ambassador of all things video. You may have spotted/heard him on “Married with Children”, “House of 1000 Corpses”, “CSI”, and many “Scooby-Doo” cartoons. He currently holds court as Craig The Snake on Nickelodean’s “Sanjay and Craig” when not producing such eclectic fare as “The Doctor Who 50th Anniversary Live Pre-Show” or hosting his infamous Comedy Central talk show, “@midnight.” We love ya’, Craig!

In one sense this is just another zombie flick, one of the hundred-million-or-so that crawl hoary from the ground each week. But this one’s special for two reasons: First, it’s the only rotter film we know that has “fracking” as part of its backstory, and second, it stars/cameos Mischa “The O.C.” Barton, Billy “Titanic” Zane, and Dee “The Howling” Wallace. First-time actor Michael Kean gets the most screen time as the rebel youth who decides to break free from their “safe” fenced-in city. Doesn’t really go all that well …