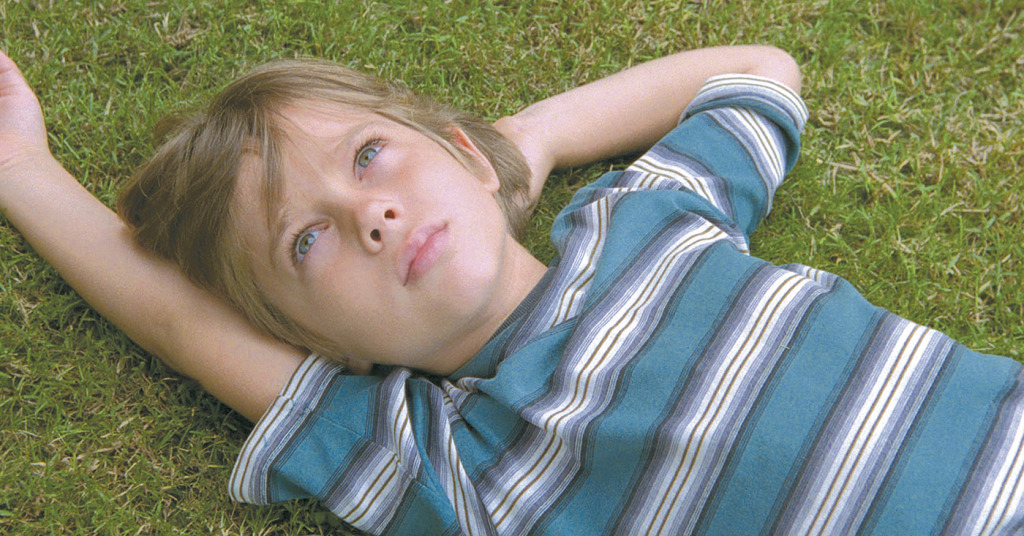 BOYHOOD
2014; $25.98; R
A lot has been made of writer/director Richard Linklater’s impossible technique – filming the adolescence of a young boy by adding a few minutes of film every year for 12 years – but even without that gimmick, this would have been an amazing movie. Ellar Coltrane stars as the boy, with Patricia Arquette as Mom and Ethan Hawke as Dad; newcomer Lorelei Linklater is the sister who easily steals every scene she’s in. To say more might spoil some of the terrific surprises of this little opus, but we do suggest you pay attention to the soundtrack, with bits from Coldplay to Arcade Fire. Recommended.

THE BOYS FROM BRAZIL
1978; $24.98; R
Finally available on Blu-Ray, this much-maligned tale of Nazi scientists continuing their sick genetic experiments while hiding in Paraguay, is one of the least appreciated films we know. OK, so it does “star” Steve Guttenberg; it also features Gregory Peck (as Dr. Mengele!), Laurence Olivier, James Mason, Denholm Elliott, Lilli Palmer, and a host of other greats. The plot unfolds slowly, with a group of 94 seemingly unrelated and unremarkable men around the globe mysteriously marked for assassination. Only Nazi-hunter Olivier sees the connection in this clever tale of clones, dobermans and Lugers — oh, my! – written by Ira “Rosemary’s Baby” Levin.

ELSA & FRED
2014; $10.98-24.98; PG-13
Shirley MacLaine and Christopher Plummer … that pretty much says everything you need to know about this film. If a story of two handsome aging people finding long-delayed love at the base of the Fontana di Trevi intrigues you, then you will also enjoy the bits with Marcia Gay Harden, Scott Bakula, George Segal and James Brolin. If not, then there’s probably a horror flick just down the page. A unique and insanely romantic outing for lovers of any age. Will get you laid.

HELL FIRE
2012; $24.98; UR
The cast of this no-budget horror/gore outing, peppered with sly dark comedy, is perfectly in sync and clearly having a ball. That goes a long way towards turning a so-so movie into something special. A group of trashy young women (all of them indie-movie vets whose names you wouldn’t recognize) decide to get their revenge on a cad who has treated women badly. So they kidnap, beat and humiliate him until they discover his true identity – he’s The Freakin’ Antichrist! Don’cha just hate it when that happens? Bloody good fun.

HORNS
2013; $14.98-29.98; R
Daniel “Harry Potter” Radcliffe continues to find odd little movies to have fun in. This time he’s an American Everyman, accused of murdering his girlfriend (Juno Temple), who wakes up one morning sporting a pair of horns from his head. He also discovers a weird supernatural power – a goofy sort of truth serum – that he uses to go after the real killer. Or does he? One of the most bizarre and original movies we’ve ever seen: in turns, insane, hilarious, frightening and sad, but never less than mesmerizing. An instant favorite. Highly recommended.

PLAYING DEAD
2013; $17.98-24.98; UR
AKA: “Je fais le mort”in its native French, this film follows the trials and travails of an obnoxious actor (François Damiens, “OSS 117: Cairo, Nest Of Spies”) whose constant hysterics and over-the-top personality have made him unemployable. That’s when he gets a temp job helping the police reconstruct crime scenes – playing the victim! – teaming with investigator Geraldine Nakache (“Kaamelott”), turning her life upside down in unexpected ways. Yet somehow they uncover previously unsuspected killers. Truly unique, and quite funny, even if it is subtitled.

THE BIBLE BELT SLASHER: THE HOLY TERROR
2013; $19.98-24.98; UR
While you’d be hard-pressed to prove it from the box cover, this is actually “Part 2,” Part 1 having been a 30-minute release from 2010. Or maybe it’s the other way around … we were kinda drunk at the time. In either case, religious asshole Frank Simon … no, wait … that’s Jason Fry (writer/star Larry Baumer) kills, drills, mutilates, maims and prosthelytizes anyone who is less than a perfect Christian for director/co-star Bradley Creanzo. No-budget regional horror is always a gory, sublime treat, but you can’t watch it sober.

THE EQUALIZER
2014; $17.98-34.98; R
Fans of good ‘80s TV (not that there was much of it) fondly remember this title as an outstanding weekly drama with Edward Woodward as the compassionate PI with the smoky past and huge Rolodex of secret contacts, able to help people who are in over their heads. This movie version finds Denzel Washington as a super soldier version of Woodward, a human weapon who has faked his own death to live the quiet life in Boston. He gives it all up to rescue Chloe Grace Moretz, the target of an inhuman Russian gangster. Given all that charisma and Hollywood’s fondness for cranked-to-11 fight scenes, how could this be anything but great?

THE GOOD LIE
2014; $24.98-35.98; PG-13
This is something of a dramatic sequel to “The Lost Boys,” the doc about Sudanese refugees relocating to Europe and America to escape genocide. Here their angelic blonde and insanely beautiful American savior is Reese Witherspoon, who at one point says, “Who do you have to screw around here to see an immigration officer?” to which every living male in America – including character actor Victor McCay – says, “Me!” We thought it was kinda corny, but having never been refugees, what the hell do we know?

Apparently, Netherlands TV is a tad more progressive than ‘Merican TV (surprise, surprise), particularly with respect to young-teen Gay romance. Here, Dutch superstar Gijs Blom falls for his relay-race partner, Ko Zandvliet, in a tender, summer-long courtship while they train for a race of national importance. More importantly, this hesitant first romance is presented with all the tenderness and — dare we say it?! — wholesomeness, that you’d expect in any young-love tale. Lotte Razoux Schultz is wonderful as the obligatory girlfriend. Recommended.

CANDYMAN: FAREWELL TO THE FLESH

This sequel to Clive “Hellraiser” Barker’s 1992 “Candyman”, the tale of an immortal one-handed killer-demon wreaking vengeance on the innocent and the curious, may be the best of the franchise, and it certainly didn’t hurt the career of star Tony Todd. Succeeds by eschewing big-name stars, immersing itself into the natural otherworldliness of New Orleans, and not allowing  Barker to direct. A spooky, violent, ghostly and atmospheric hack-fest with some quick side-boob shots of Kelly Rowan (“The O.C.”). Nicely done, now on Blu-Ray.

Director Tate Taylor’s followup to “The Help” is a biopic of the troubled Godfather of Soul, James Brown. Chadwick “42” Boseman stars as Brown, born and raised in abject poverty and violence. His transformation from street thug to soul superstar was an act of will, literally demanding the attention of audiences and record companies who accepted his many personal flaws along with his genius. A truly unique and fascinating portrait of an American icon.

At heart this is a small film about two long-time lovers who marry, then are forced to live apart for financial reasons. That fact that the two are played by John Lithgow and Alfred Molina really shouldn’t enter into it, but for all our supposed sophistication, their sex still makes “out there” movie-fodder. The moviemakers wisely focus less on the sexism and more on the agism the two face – surely, society intones, after 40 years together these two should be happy to have some time apart! – making their situation all the more painful. Frankly, we would have like to have seen a bit of comedy from these two vets, but as a straight-up drama it is thoroughly entertaining.

Not a terrific film by any means, but Idris Elba turns in his usual amazing effort as the convivial stranger knocking on Taraji P. Henson’s door. He claims to be having car trouble and wants to use her phone. She, alone, a wife and mother of two, hears the warning signs but ignores them. Bad move, babe. A great date movie that’s bound to start many a complex conversation about the role of women in movies, and why leading men are either villains or saviors, but never just people. Would have been so much better as an “R.”

Indie-romance vet Matthew Reese is a butt-kicking human sniper in our war with an invading alien race, who stumbles across Mirra, an injured alien woman abandoned by her own people. She will die without his help, but what does he care? His job is to kill these things! Beautiful Nichelle Aiden (with spooky-hot contact lenses) strikes just the right balance of fragility and pride as the woman. Kevin Sorbo does a cameo. Worth a look.

Ensemble-flicks are always a mixed bag, especially when the cast is as varied as this one, ranging from Tom Berenger, Kyra Sedgwick, and Lauren Cohan to Kelsey Grammar, rapper Nelly, Sylvester Stallone and Danny Trejo. Berenger is the mysterious author whose latest book sends the world into a frenzy of “fear facing.” Celebs and shlubs alike face down their worst fears, leading to life-changing epiphanies. This is all meant to be inspirational, we guess, but it just struck us as silly – and not all that far fetched considering how friggin’ crazy the world has become. Kinda fun. (Kickstarter fans will recognize this as having been crowd-sourced, though we can’t find evidence that any investors have ever been paid.)

We love no-budget regional horrors, and this one is a perfect example of why. A group of filmmakers break into teams to film 13 of the most haunted sites in Georgia for their next movie. One of the teams – filming in The Devil’s Tramping Grounds – is never heard from again. Bwaaahaahaaa! Just as stupid, obvious, and entertaining as it sounds.

A gift to fans of no-budget horror, especially those with a bent for scream queen Debbie Rochon, who does a cameo here as a doctor. It’s your basic “Walking Dead”-inspired tale of viral zombies having taken over the world, with our hero survivors now scurrying from building to building during daylight hours, always careful to barricade themselves in at night. With more psychological terror than gore, and some of the best acting we’ve ever seen in this sort of thing. All in all, a well-made Canadian muncher.

The Peterson family – smokin’ Maika Monroe, Brendan “The 100” Meyer, Sheila “Gossip Girl” Kelley and Leland “24”/”Taken” Orser – is in mourning over the loss of their soldier son, Caleb, when the doorbell rings. On the doorstep they find newly-discharged soldier Dan “Downton Abbey” Stevens, who claims to have served with Caleb. They accept him at his word, invite him in, and make him an instant member of the family in this wisely R-rated thriller with some wild surprises. We can’t say more, other than “check this out”. You won’t be sorry.

THE PLEASURES OF BEING OUT OF STEP

If you are reading this in an alternative paper such as LEO, you can thank 89-year old Nat Hentoff, one of the pioneers of alternative journalism. Over his long career as a civil libertarian, writer, critic and social gadfly, Hentoff championed much we take for granted today. Among other things, he was one of the first critics to openly promote Jazz as an art form, and the soundtrack of this doc echos his enthusiasm with groundbreaking work from Duke Ellington, John Coltrane, and Bob Dylan. A rich and very rewarding look at a life that has shaped and enriched our world for 3/4 a century. Highly recommended.