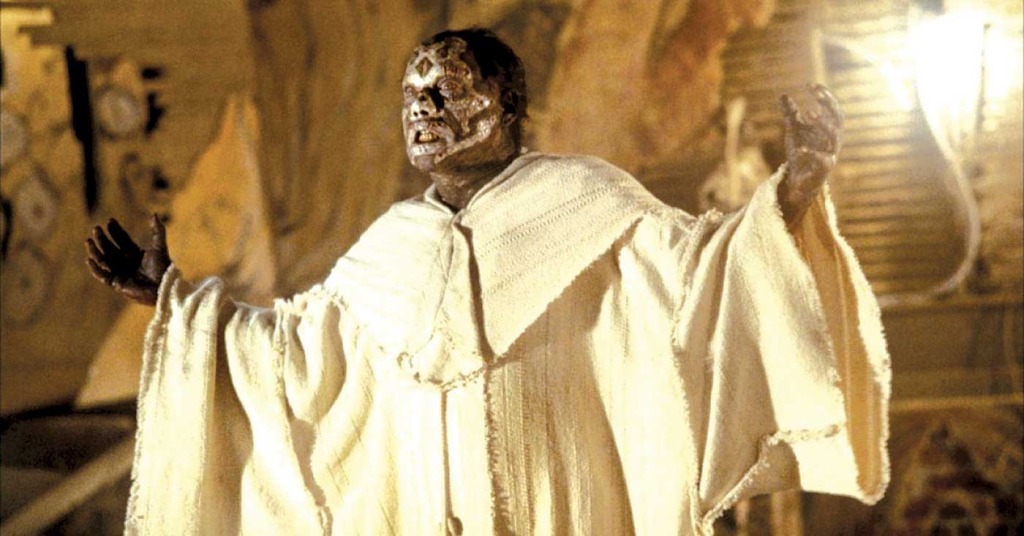 LORD OF ILLUSIONS
1995; $24.98-29.98; R
This had the potential to be author Clive “Hellraiser” Barker’s greatest movie – if only he hadn’t directed it. Scott Bakula plays a private eye investigating the murder of a sleazy magician, but the more he learns about the man and his magic, the more he comes to believe that the victim may have been “the real thing.” And there may be others. And they are not the sort of people you want to mess around with. Terrific sets, wonderfully nauseating makeup, gallons of blood and state-of-the-art (for ‘95) digital effects come together in a tale about men evolving into cruel, omnipotent gods. One of our favorite flicks, finally available on Blu-Ray.

STONEHEARST ASYLUM
2014; $11.98-24.98; PG-13
It’s a good thing that this Poe-penned visit to a 19th Century insane asylum is rated PG-13 – we’d hate to see what frights they could have offered up with an “R”! Jim “21” Sturgess is a new doctor under the tutelage of superintendent Ben Kingsley, whose patient, Kate Beckinsale(!), draws the young doctor closer toward the strange truth of the place. Other exclamation-worthy cast members include David Thewlis, Brendan Gleeson, Michael Caine and Sophie Kennedy “Nymphomaniac” Clark! Not perfect, but one of the best old-school terror-tales we’ve seen since the heyday of Hammer Studios. Recommended.

HI-8: HORROR INDEPENDENT 8
2013; $14.98; UR
If the names Tim Ritter, Brad Sykes, Donald Farmer, Todd Sheets, Chris Seaver, Ron Bonk and Marcus Koch mean nothing to you, then skip to the next review, loser. The rest of us – who recognize these men as pioneers in the shot-on-video horror genre – will run out and snatch this 8-part anthology featuring some of the most creative talents in the business today, all vets at working with zero budget and no script, where literally anything can happen. Our favorite was “The Scout”, co-starring unknown but up-and-coming smoker Alexis Codding. Will make you want to dig out your old VHS camcorder and yell “ACTION!”

LEVITATED MASS
2013; $27.98; UR
Looking for something different? Here you go! Artist Michael Heizer is known for his “land sculptures”: public art challenging viewers to pay attention to and appreciate the world they see. This doc details his creation of an LA work comprised of a massive concrete trench, over which he has balanced a 340-ton granite boulder on inches-wide points, allowing the public to walk underneath and become intimate with its godlike presence (while quietly wondering if they are going to get squished). The engineering behind this feat is almost as impressive as the results. Very entertaining.

MENTOR
2014; $24.98; UR
A dead-eyed look at the dark underbelly of middle-class America. The Vidovic family escaped war-torn Bosnia to settle in Mentor, Ohio, officially declared “One of the Top 100 Places to Live In The US,” only to find a new sort of war here, where bigotry and intolerance are the key weapons. After unrelenting bullying, physical abuse and even death threats at school – and no help from the police or school authorities – their 16-year-old daughter hanged herself, just one of several immigrant-child suicides revealed in this devastating doc.

MOTHER’S MILK
2012; $22.98-24.98; UR
Unknown actor Casey Chapman stars as a young college professor with unresolved childhood issues which boil over when he spies equally unknown Mackenzie Wiglesworth walking through the park. He kidnaps her to satisfy a sad, intimate and all-too-human need we all share – but this is not some sick, prurient fem-as-victim fantasy. He clearly hates himself for his actions, while she comes to understand that he is just a child crying out for help, one that society has turned its back on. The perfect indie movie experience: unpredictable, thought provoking, adult, immersive and very personal. May be hard to find, but definitely worth your time.

TEENAGE MUTANT NINJA TURTLES
2014; $27.98; PG-13
This TMNT reboot, courtesy of Nickelodeon and Michael Bay, was a hit at the box office despite many fans’ carping about the unoriginal plot and same-old characters. Really? Ninja Turtles unoriginal? What a concept! Megan Fox comes aboard as April O’Neil, with Will Arnett as Vernon Fenwick, Johnny Knoxville as the voice of Leonardo and Tony Shalhoub as the voice of Splinter. The only other recognizable cast member is Whoopi Goldberg, who plays Bernadette Thompson, all of them gathered in a standard Turtle plot: Shredder holds NYC in a grip of fear until our beloved brothers rise from the sewers to save it. Cowabunga yet again, dude!

THE DEVICE
2014; $14.98-27.98; UR
A minor if mature little sci-fi spooker that combines urban legends with evil alien machinations, relying more on emotion than special effects to drive the story forward. A pair of adult sisters (Angela DiMarco and Kate Alden) and a fiancé (David S. Hogan) discover an odd sphere in the woods near the family cabin, the site of unspoken trauma from the women’s past. An original horror experience for adults who are tired of the same old thing.

THE MAZE RUNNER
2014; $14.98-39.98; PG-13
This dim-witted, overlong, formulaic YA-novel-meets-video-game cinematic crapfest bored the living snot out of us. Avoid at all costs and save your money to buy the original 1959 “Twilight Zone Complete Definitive Collection” ($133.49-199.99): 28 discs of true mind-expanding social commentary wrapped in entertaining tales of imagination and horror and wonder. We can guarantee you that “Maze Runner” author James Dashner has a copy and has watched it often.

A simulating look at Altina Schinasi, born in 1907, just 200 years ahead of her time. In a period when women were obedient and chaste – especially Jewish women – she dared to become an artist, famed for her boldly sexual paintings, drawings and sculpture. But her greatest passion was injecting art into all aspects of peoples lives, designing (among many other things) the exotic “cats-eye” eyeglass frames made famous by Lucille Ball, and for directing an Oscar-nominated film on Nazi brutality. A target of Joe McCarthy and friend to MLK, this doc introduces us to one of one of the 20th Century’s most overlooked heroines.

You might think that by season 11 (out of a record-setting 20!), this legendary TV juggernaut would be running out of ideas – but you couldn’t be farther from the truth. Case in point: this season includes the iconic “Ten Little Indians”, one of the most popular of the entire series. In it, someone places a bounty on the head of Sheriff Matt Dillon (James Arness), resulting in one of the smartest – most violent – hours in TV history. But before you complain about the bloodshed, keep in mind that this episode is based on Shakespeare and features an outstanding cast, including an early TV appearance of Zalman King (who later in life became an award-winning cable-TV porn producer), plus Warren Oates, the great John Marley, and Bruce Dern. Must-own TV.

THIS IS WHERE I LEAVE YOU

Four adult sibs – Jason Bateman, Tina Fey, Adam Driver, and Corey Stoll – come together when their father dies, to observe the Jewish tradition of “sitting Shiva”: living together under the same roof for a week without killing one another. Spicing the mix is “hot mom” Jane Fonda plus all their variant spouses, family friends, and hangers-on including Rose Byrne, Connie Britton, Timothy Olyphant, Dax Shepard, and the criminally underused Abigail Spencer. Built to be an Oscar contender, the script gives everyone a great line or two (even if the plot has to stretch to do so), and the whole affair gets raunchy enough to keep things lively. An inappropriate, over-the-top adult sitcom with extra matzah.