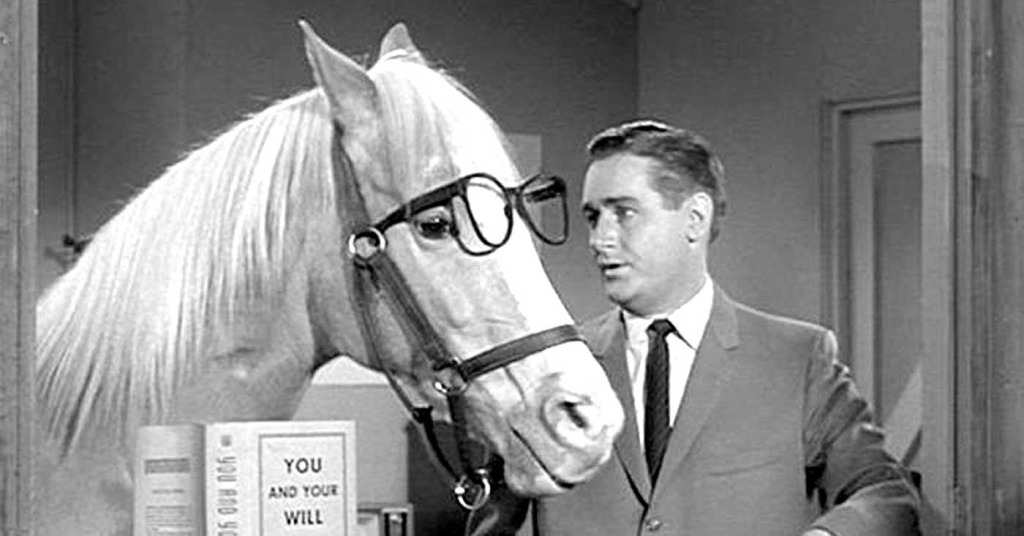 Holy Expletive Deleted! The entire six-season, 143 episode run of America’s greatest talking horse sitcom! (Okay, “only” talking horse sitcom …) And best of all, it contains broadcast-length Season 1 episodes – previously only available in shorter “syndicated” form – and Season 6, available here for the first time ever on home video! For those with no horse-sense: Alan Young buys a house complete with a barn and a horse. A talking horse (voiced by cowboy star Allan “Rocky” Lane). But it speaks only to Wilbur, leading to endless Golden Age sitcom fun. The very definition of “classic TV”; over 58 hours of entertainment. Buy it now, or win a free one at www.videotapeworm.com!

While England knows this as “Danger Man”, to America it was always “Secret Agent”, that perfect Patrick McGoohan spy series with the great, twangy Johnny Rivers theme song. Using his wits far more often than his fists – and only pulling a gun when absolutely necessary – this show ruled the airwaves in the mid-60s, America’s first international prime-time hit. All 86 episodes are here, along with that theme song (relegated to the Bonus Materials menu for legal reasons), plus fun audio commentaries, making this a long overdue Christmas present to ourselves — but you can win yours free at www.videotapeworm.com!

DAY OF THE MUMMY

Danny Glover may have top billing, but the real star of this little opus is hard-working thesp William McNamara (you’ll recognize the voice), with help from sultry, monomonikered Nimi, and smokin’ Andrea Monier. It’s a lively Allan Quartermain-ish romp through cursed tombs – and yes, the mummy comes alive and chases them all around. Low-rent, to be sure, but head-and-shoulders above similar dreck on the SyFy channel.

A lively sequel to the unexpected 2009 Norwegian Nazi-zombie hit – which is kinda surprising since hero Vegar Hoel lost an arm in the escape. Here he wakes up in a hospital with a brand new arm … a ZOMBIE arm with super-strength and an insane, murderous will of its own! This seriously cheezes him off, so he gathers some friends and they go out to slaughter insane Colonel Hartzog and his undead minions, leading to one of the funniest, goriest, gut-munching-est battles in history. Movies don’t get any better than this, folks.

The original film, based on the true story of Winter, a dolphin doomed after losing part of her tail to a fishing net, then saved by a first-of-its-kind prosthetic tail, was a kid/family-friendly hit drama. Her Clearwater Marine Hospital story continues with the loss of her surrogate mother, leading to a frantic search for a suitable companion before USDA regulations require that she be removed. Okay, it’s not as compelling a plot as the original, but with a cast that includes Morgan Freeman, Ashley Judd, Harry Connick Jr., Kris Kristofferson and that screwy “helpful”pelican,  how can you go wrong?

GUARDIANS OF THE GALAXY

If you didn’t see this at the theater, then you were probably the only one in America who missed it – so why do we have to write a review? For the money! Chris Pratt stars as the one guy in the universe without glued-on makeup or CGI appendages in an action-packed, wonderfully goofy reprise of that great old Marvel comic that almost no one remembers. He’s a human, scratching out a living among the stars until being tossed into prison where he meets a talking raccoon, a walking tree, a bloated wrestler with no sense of humor, and a gorgeous green woman (Zoe Saldana). We’ve damned-near worn out our copy already.

Season 2 of 2011’s groundbreaking anime series; a genre-twisting, coming-of-age, boy-meets-girls tale wrapped around “Infinite Stratos”: an armored exoskeleton weapon that, for technical reasons, can only be piloted by women. This leads to world peace – until a 15-year-old boy discovers that he, too, can pilot them, which gets him dropped unprepared into the all-girl international pilot training academy. To say more would spoil the fun of this surprising and playful series that truly revels in its shy hero being surrounded by hundreds of beautiful, outgoing young girls, all rendered in lively, masterful artwork. Too much fun.

On April 3, 1968, Martin Luther King gave his famous “Mountain Top” speech. The next day he was murdered, sparking riots across America, though none worse than in Boston where brutal police sent hundreds to the hospital. James Brown was scheduled to perform there on April 5, but with the city already a powder keg, that seemed unlikely until Councilman Tom Atkins convinced the mayor to let it continue – and to broadcast it live on TV. Brown, keenly aware that the future of America might depend on his ability to demonstrate the value of Black culture, gave the performance of his life. This is that legendary, electrifying performance, the night that James Brown saved America. A must own.

WHEN THE GAME STANDS TALL

Jim “Person of Interest” Caviezel plays football coach Bob Ladouceur, who lead his Concord CA., De La Salle High School Spartans to a record-setting 151-game winning streak in 1992-2004. Frankly, sports movies bore the living snot out of us, but this one has far less to do with his coaching than what it did to his family. Of course it doesn’t hurt to have a supporting cast that includes Michael Chiklis, Clancy Brown, and especially Laura Dern as the wife who demanded, rightly, that home and family were more important than keeping a streak going.

To be perfect honest, we’ve had a hard time warming up to the latest Doctor, played by wizened Scot Peter Capaldi. Part of that is his heavy brogue, which makes action scenes, and their requisite rapid-fire delivery of lines, nearly unintelligible. Plus he’s a very dark Doctor, harkening back to the earliest days of the series, before the era of laughing, goofy, rubber faced young men, when the rogue Gallifreyan was a pontificating, even lordly old curmudgeon. But his tirades have been nicely tempered by lovely companion Jenna Coleman, who brings a sparkle to everything she touches – and by some of the best special effects of the series, particularly the clockwork faces in the first episode. A bit less accessible this season, to be sure, but far deeper and more imaginative than we’ve come to expect. We can’t wait to see what’s coming next!

That odd title will haunt you for weeks after seeing this historically-accurate recreation of a young America at its very best and very worst. 274 Confederate cadets of the Virginia Military Institute – children by anyone’s measure – are sent by General Breckinridge  (Jason Isaacs) to protect the vital Shenandoah Valley from the approaching might of the Union Army under the direction of General Ulysses S. Grant (Tom Skerritt). Both generals know that a loss here will lead to certain starvation for both Southern citizenry and their fighting forces. The amazing cast includes Lauren “NCIS” Holly, Nolan “Modern Family” Gould, Keith David and David Arquette. History at its most disturbing.

This absolutely perfect Frank Capra classic finally – and deservedly – gets the full-on collector’s treatment in honor of its 75th anniversary. For those unaware of their cultural heritage: Jimmy Stewart plays naive Everyman, Jefferson Smith, appointed to fill a vacant Senate seat by a loony Governor (Guy Kibbee), setting him in the crosshairs of every crooked, slimy, big-money politician in America (The GOP). Claude Rains is superb, as always, as Stewart’s mentor, with Edward Arnold nearly stealing the show as the slimy political hack out to destroy this new Senator by hook or by crook (Mitch McConnell). Now available in 4K Blu-Ray, complete with a collectable Digibook, UV streaming, and other neat stuff. Trust us, this is the perfect present for those hard-to-gift ‘rents. A must-own.