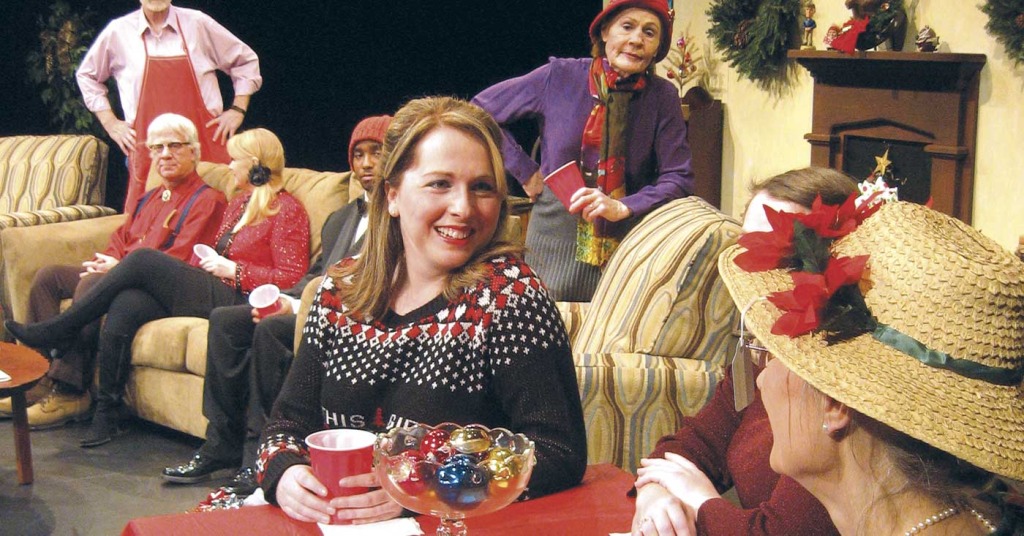 "Forgive Me It's Christmas"

Meryl is a horse trainer whose career is on its last legs. Like many of the characters Tossman has created over the years, he’s short on luck, but long on hope, compassion, principles – and problems.

Right now his problem is that he recently bought his brother, the backward, hyper-literal Loomis (Mike Burmester), a tuxedo so the two can attend a gala where Meryl is to be honored. Loomis, however, has inconveniently given the tux to a Jehovah’s Witness. “It itched,” says Loomis repeatedly. “And it’s Christmas.” And the Jehovah’s Witness was pretty down and out, and apparently in need of formal wear.

As that debate plays out, Meryl’s family shows up for the annual holiday potluck – and each arriving family member is accompanied by a new set of problems. Meryl’s sister Dorothy (Liz Vissing in a finely comic turn) has decided not to bring a Christmas ham after reading that many Christians have a hint of Jewish heritage; she also mangles the English language in pretty much every imaginable way. Another sister, Pearl (Diane Kane), whose life and wardrobe pay tribute to Minnie Pearl, brought the wrong casserole dish – which turns out to be empty. The fresh-faced youngsters in the family, Billie and May (Virginia Pollack and Katie Graviss), are a musical duo who brought their pitch pipe and a selection of original songs (but no carols) that have earned them a following of nine people.

Eventually, the potluck menu comes down to “pigs in a blanket” and a bottle of bourbon supplied by a decidedly un-demure estate lawyer named Flabby Demur (Sharon Becher). She’s on hand because she’s the executor of an estate the disposition of which will affect Meryl and family.

Then there’s the charming but enigmatic tuxedo-clad Jehovah’s Witness, Mustafah (Jerarrin Kennerly), who’s just flirting with the faith, and doesn’t mind flirting with bourbon as a possible alternative.

So there’s the set up: an ill-fed family, a mysterious stranger, a surfeit of bourbon, and a large inheritance. And, oh, by the way, the estate lawyer’s mother used to run a brothel.

This is what you might call a typical Tossman Christmas. It’s a chaotic world where gentle gibes give way to generous reconciliations, where issues of race and religion are probed with light wit and civility, where true villainy is rare, and where in the end even the most devout curmudgeons can be counted on to discover and do the right thing. There are no explosive fireworks in this Tossman-directed production, just a calm, crackling glow in a genuinely homelike setting.

Savage Rose Classical  Theatre Company’s ‘Commedia Cannon’
If you’re looking for theatrical fireworks, you should make your way to Savage Rose Classical Theatre Company’s “Commedia Cannon,” which opened last weekend and runs through Dec. 14. It will give you new ways of thinking about some very well-known works. It will whet your curiosity about some little-known works. And it will win you over to the joys of Commedia dell’Arte – a label that sounds dreadfully stuffy and academic but translates into sheer madcap fun.

Over the course of sixteen short scenes, Erin Leigh Crites and company take well-known (and obscure) works from the 16th – 18th centuries, and shake them up until they explode in sprays of intoxicating fizz. There’s nothing serious about this production — except the craft that went into the technical aspects (lighting, Martin French; sets, Sterling Pratt) and the acting.

On the technical side, Kelly Moore’s costumes are as bright as a bowl of crayons and perfectly tuned to the temperament of the characters. Every detail, right down to a glittering, feline pair of eyeglasses worn by Sean Childress as a preening, over-the-top Clarence (Richard III Act 1, scene 4) is perfectly selected.

And though the dozen members of the masked ensemble are not, alas, credited individually at the scene level in the program, everyone tackles every scene with physical and verbal bravado. It’s a superb, well-coached cast.

The masks are finely-crafted caricatures of the characters — maidens, slatterns, innocents, lechers, nobles, peasants, warriors and thieves. But the eyes are windows to the soul, and masks also serve, paradoxically, to focus our attention on the eyes behind them, whether shifty, frightened, dull-witted or infatuated. For connoisseurs of acting, the mask work alone is a clinic in how this facet of acting ought to work.

As for the scenes, ten come from Shakespeare, including two fine dramatizations of sonnets. The love triangle in Sonnet 80 (Danielle Warren, Polina Shafran, James Thompson) gets a particularly droll treatment. Richard III’s opening soliloquy is delivered by Christophe Leong behind a bulbous mask in an unctuously Nixonian voice that’s almost as creepy and comic as Nixon himself. A comic take on Hamlet’s most famous soliloquy (Alex Cooper) might seem like a thin joke, but was more memorable than many a serious attempt. Falstaff gets his due in a lasciviously witty scene from Henry IV, Part II (Sean Childress, Darren Harbour, Cora Duvall, Ava Duvall), and there are wonderful vignettes from “A Midsummer Night’s Dream” (Nissa Nicholee, Darren Harbour, Ava Duvall, Kora Duvall, Christophe Leong, Krista Harden, Polina Shafran) and “Twelfth Night” (Nissa Nicholee with Viola’s Monologue). And at the end it’s Macbeth who offers a perfect summation, perfectly delivered by Nissa Nicholee.

There are excerpts from Moliere’s “Tartuffe” (Sean Childress, Polina Shafran, Krista Harden) and Sheridan’s “The Rivals” (Megg Ward, James Thompson, Polina Shafran), masterpieces both. But the less well-known works were especially fun. A ghostly scene from Pedro Calderon de la Barca’s “The Phantom Lady” (Ava Duvall, Kora Duvall, Krista Harden, James Thompson) could well have inspired Abbott & Costello. A sung version of Tobias Hume’s “Tobacco is Like Love” (Christophe Leong, Polina Shafran, Ava Duvall, Krista Harden, Darren Harbour, Kora Duvall) was giddy fun. And best of all was a scene from George Chapman’s “The Blind Beggar of Alexandria” that finds a Count and a “martial Spaniardo” contending for the love of a woman (Christophe Leong, James Thompson, Darren Harbour) with pistols, swords, dancing feet and words like, “Surely the supple glance of this lady nymph hast suppled my Spanish disposition with love that never before dreamt of a woman’s concavity.”