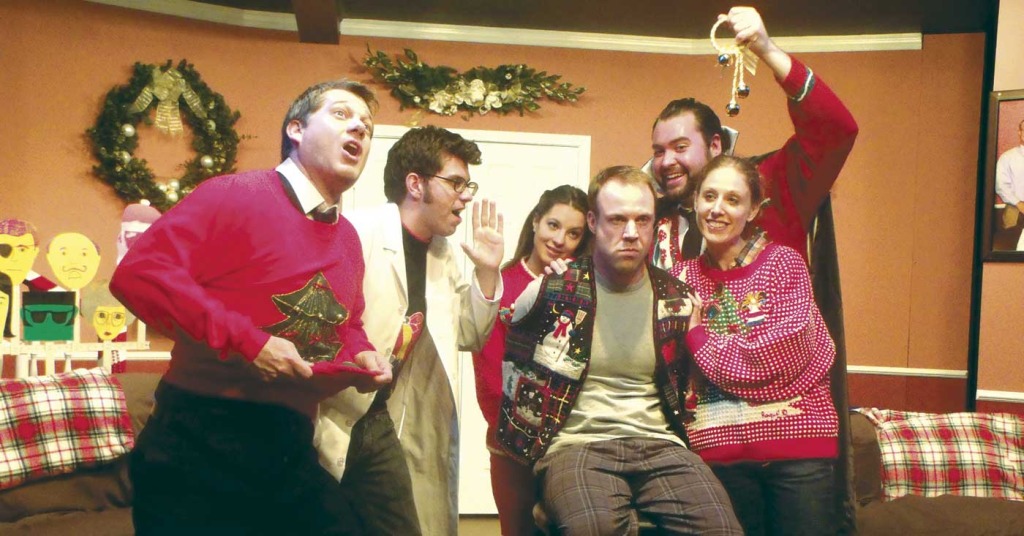 The Cast of "The Kings of Christmas

“Marley was dead: to begin with.” Second only to “Call me Ishmael,” this just might be one of the most recognizable opening lines in English literature. Not only does it kick off the best known Christmas story of modern times, it does so with that delightful and perplexing colon – a piece of punctuation that’s perplexed grammar Nazis from the beginning – and just last year was declared by New York Magazine to be one of “the five best punctuation marks in literature.”

But this grammatical digression takes us away from the main point, which is that Marley was dead.

In “The Kings of Christmas,” which runs through Dec. 22 at The Bard’s Town Theatre, we hear these words as the strains of “Blue Christmas” fade away in the background. Within a few moments, we also learn that Marley was a cat; that he died in an especially spectacular manner; that his remains are presently stored in a crumpled brown paper that bears the label “DEAD CAT”; that Marley died under suspicious circumstances; and finally that Uncle Frank King (Doug Schutte, who also wrote and directed the play) is bound and determined to uncover the truth about Marley’s demise.

The madcap opening moments of “Kings” are flat-out brilliant – and the rest of the play lives up to the opening. This is among the best-written, best-executed riffs on Dickens’ “A Christmas Carol” you’ll ever see. In fact, a word to the wise: stop reading for a moment and immediately order your tickets. This is the fourth season of “Kings,” and as with the Louisville Ballet’s “Nutcracker” and ATL’s “A Christmas Carol,” tickets are a hot commodity. “King’s” has become a holiday tradition for many Louisville theater-goers. Groups file in together and fill entire rows in the intimate performance space. After a packed Sunday night performance, I overheard a chorus of folks saying: “We’ll do it again next year.”

“Kings” is the story of a gloriously weird family that was once headed by Stein King, known as The Magistic King, the greatest Elvis-impersonating magician every to work Las Vegas. Ten years ago, on the night of his highly promoted TV spectacular, a trick went wrong and Stein disappeared in a puff. The very next day, Marley showed up – and over the decade since, Stein’s family has become utterly dysfunctional.

Stein’s wife, Carol (Jennifer Levine), has developed an outlandish alter ego named Sylvia with an outlandish accent and a garish wardrobe. Stein’s wand-wielding son Kennedy (Jake Beamer) – known as The Magistic Prince – might have followed in his father’s footsteps, but for a few embarrassing tics (including a bit of performance anxiety that causes him some urinary embarrassment every time he takes the stage). Another son, Clinton (Ben Gierhart), is either a mad genius – or just mad, and given to blowing things up.

Then there’s Carter (Scot Atkinson), who has grudgingly returned home for the holidays. Over the years, Carter has made a successful career as a critic for the New York Times. By all accounts, he’s an especially cruel critic – who has even savaged one of brother Kennedy’s shows.

Everyone in the family thinks Carter is guilty – hence, he’s secured to a stool, hands behind his back, with a single ally, the infatuated (and spurned) Wendy Williams (Beth Tantanella).

The first half of the play is a courtroom comedy like none other, with Uncle Frank as prosecutor (channeling his courtroom idol, Ben Matlock), Wendy as an earnestly impulsive defense attorney (who repeatedly objects to her own inappropriate remarks) and a judge and jury made from poster board cutouts. The highlight of the trial is an intricate series of Rashomon-like reenactments that depict various accounts of Marley’s demise. These scenes are comic writing of a high order – and the ensemble revels in the shape-shifting variations. Gierhart’s Clinton is by turns a wild-eyed gibbering idiot and a debonair, handsome genius. Beamer’s Kennedy morphs from a narcissistic, cowardly incompetent who couldn’t cast a fishing lure to a narcissistic magical genius with overpowering stage presence and a wand that works wonders. Carter devolves from a commanding, authoritative presence to a sniveling wimp. Tantanella’s Wendy is sometimes desperate and clingy, other times forceful and confident – and Levine’s Carol undergoes a finely honed maternal transformation, as well.
In the second half, the Rashomon conceit gives way to a full-blown variation on “A Christmas Carol.” The spirits of Christmas past, present and future are represented by the Elvis-impersonating Stein King (Schutte, in a virtuoso hip-twitching, performance). This spirit is a Vegas Elvis, dressed in satiny Vegas attire, speaking in a syrupy Tupelo drawl and littering his every speech with snippets from Elvis hits (56 references, we’re told, at one point and each funnier than the last).

I can’t say that “The Kings of Christmas” teaches any lasting lessons about the meaning of season, but if we all adopted “Don’t Be Cruel” as our operating principle for the next few weeks, the world would be a brighter place.