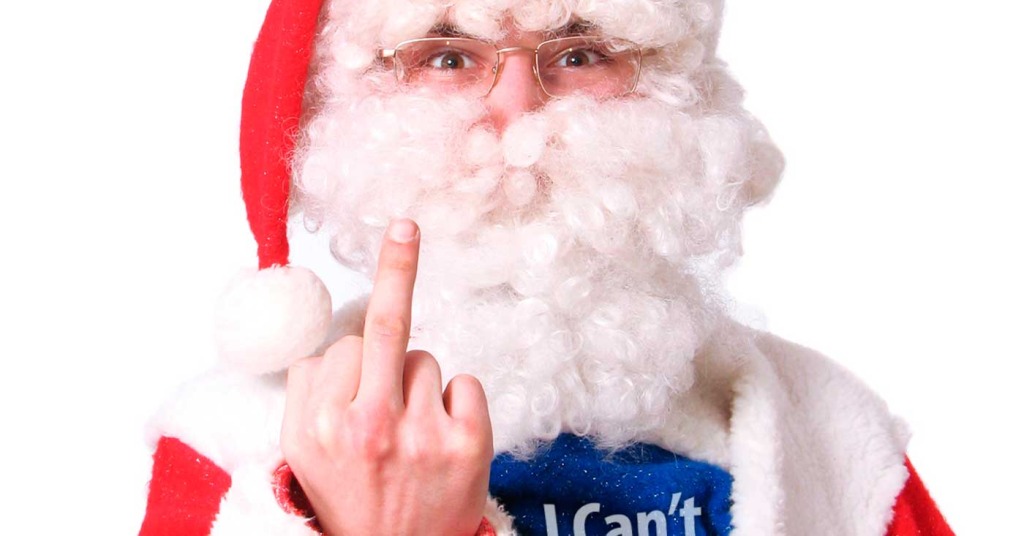 Santa Claus has joined the movement against police brutality, prompting an ironic twist to the war on Christmas. Over the weekend, parents rushed to Oxmoor Mall with their children for the timeless tradition of getting a picture with Santa. However, things turned contentious when the normally jolly fat man unbuttoned his iconic large red coat to reveal a political message — an “I can’t breath” t-shirt in honor of Eric Garner who died from an altercation with police.

The first few families through the photograph line did not sense anything unusual. Some thought it was unusual that Santa had the children raise both hands in the air for each photo, but figured they were talking about what it’s like to ride on a one-horse open sleigh. Only after Santa revealed the demonstrative attire he was wearing beneath his coat did they make the connection with the Ferguson protests.

The families remaining in line quickly diverged into two camps in support and opposition of the crusader-Santa. The two camps, which appeared to be divided largely along political lines, created a unique dichotomy where liberals accused Republicans of declaring a war on Christmas.

Clint Morris, President of Louisville Young Democrats, said, “Santa is the symbol of Christmas, and Republicans are trampling on his rights to freedom of expression.” He added, “It’s an attack on the Founding Fathers to attack the Father of Christmas.”

Ivy Olson, mother of sisters Mary and Ashley, who were noticeably distressed at the sight of Santa being dragged out of the mall, said, “I don’t think it is an appropriate message to send to young children. Police risk their lives every day and we should support them.”

Elmer and Abby Smith, who brought their grandson Daniel to see Santa, disagreed, saying, “Santa is a role model and icon for children. He has worked hard every year and earned the platform to voice his opinions. What a great lesson to teach young children. That’s the Christmas gift that will keep on giving.”

Mall cops quickly arrived at Santa’s Workshop to address the disturbance. While several elves attempted to shield their boss from the cops, they were overwhelmed by their mall-issued Segways.

The cops appeared to handle the situation with the utmost care, which was widely documented by dozens of cell phone cameras from Oxmoor shoppers.

Santa has been sent back to the North Pole and will remain on paid leave until a full investigation is conducted. A spokeself told reporters that Santa is resting comfortably and said that any legal action will wait until after December 25, out of respect for the “Christmas spirit.”

He added that he is looking forward to spending his time away to listen to nothing but the new Taylor Swift album, and anything but that cheesy mall jingle.