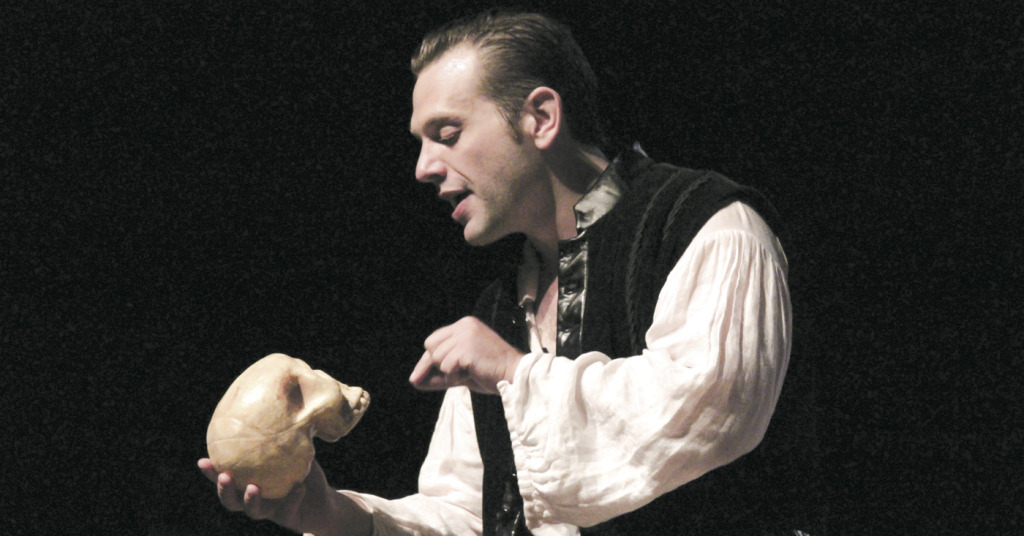 The finest moment of Louisville theater in 2014? A July night in Central Park. Gusts of wind were whipping the canopy of those massive trees. To the north, flashes of lightning were making a slow approach. Onstage at the C. Douglas Ramey Amphitheater, Hamlet stood in a graveyard, contemplating the skull of Yorick, that fellow of infinite jest.

And absolutely nobody in the audience was leaving.

Later, Greg Maupin, who played Polonius in that production, summed it all up in the perfect tweet: “Folks. Hamlet says, The rest is silence,” and the rain starts pouring. Matt Wallace has arranged all KINDS of surprises this Kentucky Shakespeare season…”
Indeed, Wallace did just that. By any measure, 2014 marked a superb year in the history of Louisville theater, and the stunning revitalization of Kentucky Shakespeare is the finest story of all. The previous season was brought to a premature close by an offstage drama that left the company’s future in doubt, but a resilient board turned to Wallace (whose history with the company dates back decades). Wallace, in turn, turned to Louisville’s vibrant independent theater community, formed partnerships, recruited top-notch performers, directors and theater techies, and he staged the most successful season in the company’s history. The productions were marked by the kind of clarity and passion that resonates with audiences and holds them to their seats — and attendance shattered all previous records.

Wallace continues to build partnerships and momentum. A few weeks ago, folks packed into a room at Locust Grove for a stirring candlelight reading of “Macbeth,” and Kentucky Shakespeare plans plenty of outreach through the winter, including a recorded radio performance of George Bernard Shaw’s “Dark Lady of the Sonnets” (January 6, Kentucky Center’s Bomhard Theater; free, but requires tickets, call 584-7777).

Partnerships were the key to Kentucky Shakepeare’s success — and those partnerships were possible because there are plenty of partners out there. By my count, there are more than 20 active companies in the Metro region (leaving aside some excellent college and high school troupes). And over the years, a growing pool of theater folks, an increasing number of venues and a huge increase in the number of productions (hardly a weekend passes now without a couple of competing openings) have stimulated a steady rise in quality across the board — and an increasingly rich assortment of offerings in all kinds of venues.

For the moment, suffice it to say that some of the city’s well-established companies — Bunbury, Pandora, CenterStage, the wildly successful Derby Dinner Playhouse, and Walden, host of the sprawling Slant Culture Theatre Festival, which this year seemed to involve nearly every theater person in town — are offering excellent work. But the year saw some noteworthy developments — including the bittersweet shuttering of Le Petomane Theatre Ensemble after a decade of delightful productions. This would be an enormous loss for the city but for the fact that members of the troupe are showing up all over the place in other theatrical settings.

Speaking of venues (and of partnerships), The Alley Theater opened two new venues. Its brick and mortar theater, at 633 West Main St., offers a the coolest theater concession stand in town (cheap popcorn, craft beers, etc.), and the venue is being used by multiple companies, like Savage Rose Classical Theatre Company, which presented a raucously funny series of Shakespearian sketches staged commedia dell’arte style this fall.

As if one new home weren’t enough, in November, The Alley Theater debuted its new mobile venue (a renovated TARC bus now dubbed Salley), hosted an afternoon of theater at the Louisville Zoo. The Alley folks offered a zany radio play, and a swashbuckling parody of “The Princess Bride,” and more, but the high point of the afternoon was a moving pantomime recounting varieties of immigrant experience from the Spanish language troupe, Teatro Tercero Llamada. Look for Salley at a park, festival or school in your neighborhood over the next year, and if things go according to plan, look for Alley to include other partner companies in the fun.
Later in the fall, Teatro Tercero Llamada showed up at The Bard’s Town Theater with a moving performance of Gustavo Ott’s “Monsters in the Closet, Ogres under the Bed,” a moving Spanish language reflection on the 9/11 attacks — made accessible to English speakers through a deft use of supertitles. (The city actually has two Spanish language theater troupes; the other, El Delirio, brings another Gustavo Ott production to The Bardstown in mid-January.

Meanwhile, Theater 502, which skips all around the town — they might show up at the Kentucky Center’s MeX, the Baron’s Theater (formerly Squirrely’s Tea Room), or The Clifton Center (where they’re slated to produce Anne Washburn’s “Mr. Burns – a post-electric play” in February) — continues to build a stellar reputation for innovative theater, including the epic serial production of “The Stranger and Ludlow Quinn.”

And then there is Actors Theatre of Louisville, the city’s most prominent performing arts organization. Of ATL there is just this to say: lucky is the person who lives in Louisville and loves theater. After two seasons under the leadership of Les Waters, who was appointed Artistic Director in January 2012, the company seems to grow stronger and more confident with each production. The 2014 Humana Festival was strong across the board, and the regular subscription productions have been marvelous. If you let your subscription lapse years ago because you thought, “been there, done that,” — well, its time to take another look.